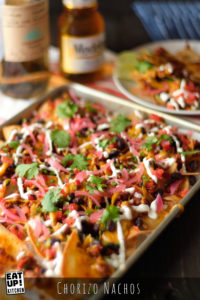 Do you really need a recipe for Chorizo Nachos? Prob not. How about making your own Nacho Cheese?? Read on for the cheesy deets and other helpful Nacho Assembly Tips (N.A.T.s). 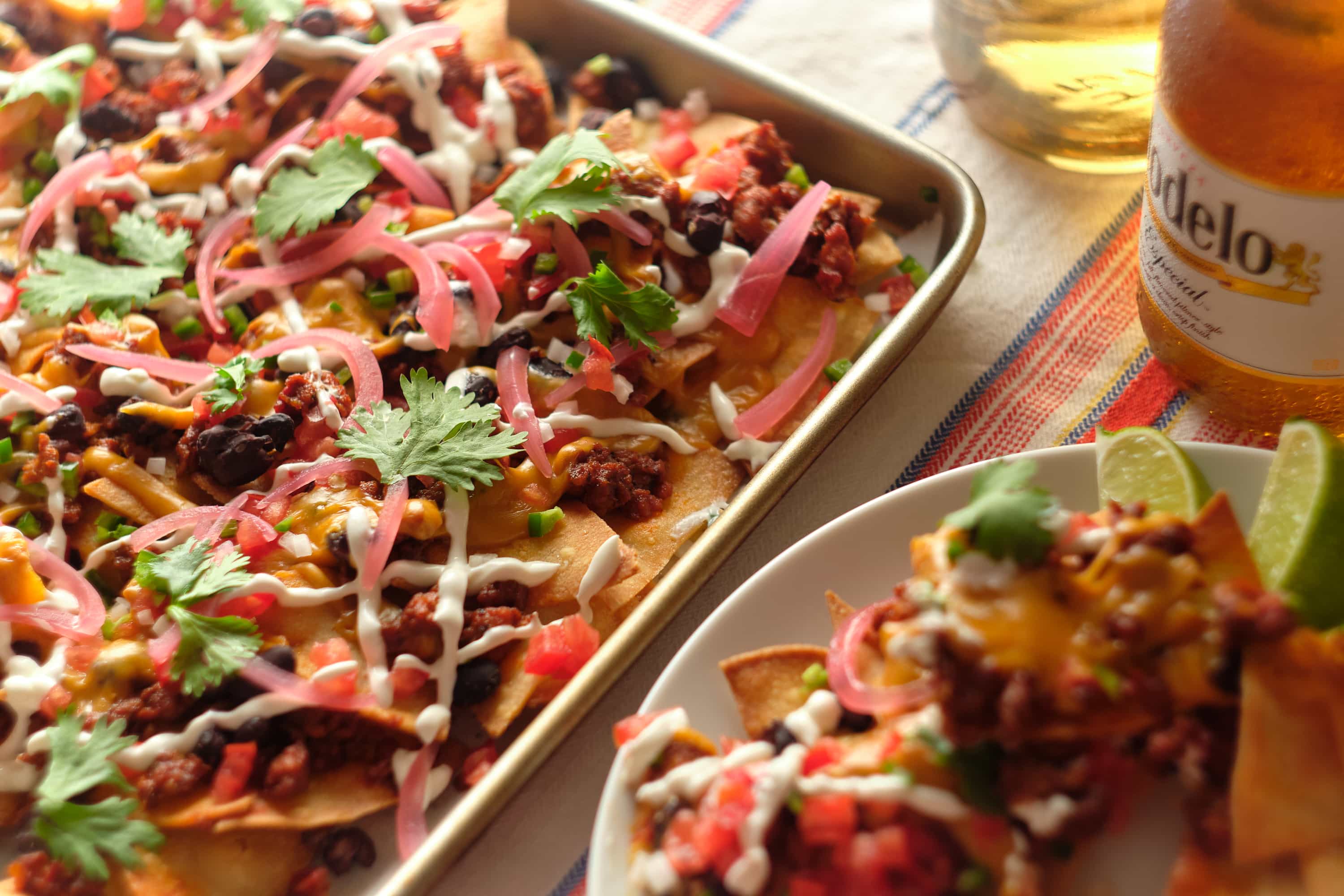 (1) The chips you get out of the bag are going to be lighter than the home-fried versions. A lighter chip is a chip more prone to breakage from a heavy load.
(2) Chips fried from store bought corn tortillas are going to be a little thicker and nearly indestructible. While they bring more heft to the party, they’re time consuming to prepare and require a bit more jaw-cersize.
(3) Homemade corn tortillas chips cut in to nacho triangles are the best way to go from ‘I want nachos’ to ‘let’s order a pizza’. Not only are they time consuming, in my experience, they tend to puff up when you cook them. This can probably be rectified by pressing the tines of a fork into the chip. 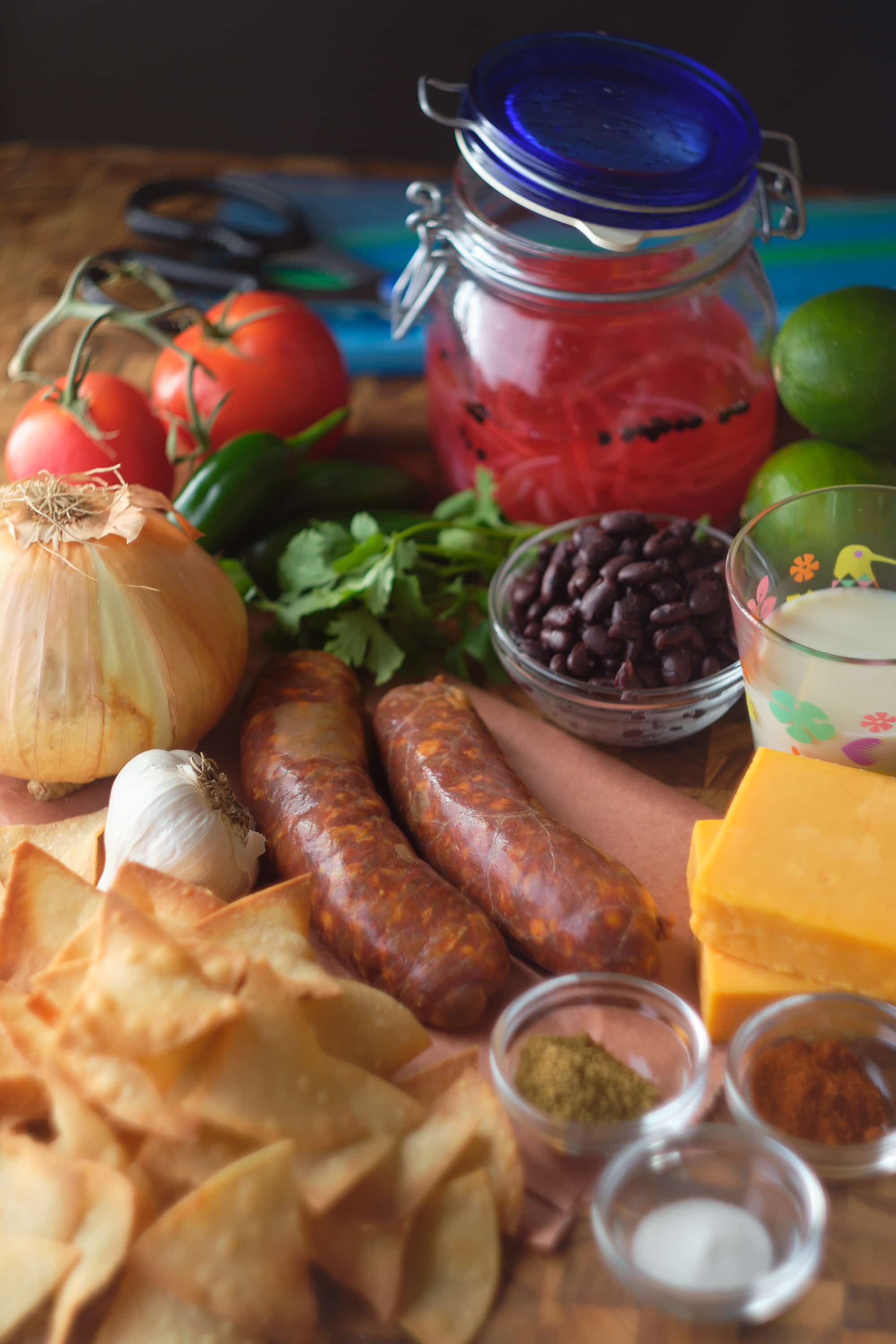 For this recipe I opted for tortilla chip type 2. I hate when I get The Best Glob of nacho toppings only to have the chip break halfway between the plate and my mouth. IMO, bag chips are no bueno for nachos. They are however great for guac and pico de gallo. If you can find extra thick tortillas, they should be just fine for nachos.

Instead of deep frying the chips, I baked them in a 400°F oven after brushing them with corn oil. 15-20 minutes is all it takes with a flip half way through. You may need to do several batches depending on the size of your oven and your sheet tray. I think I did six batches. 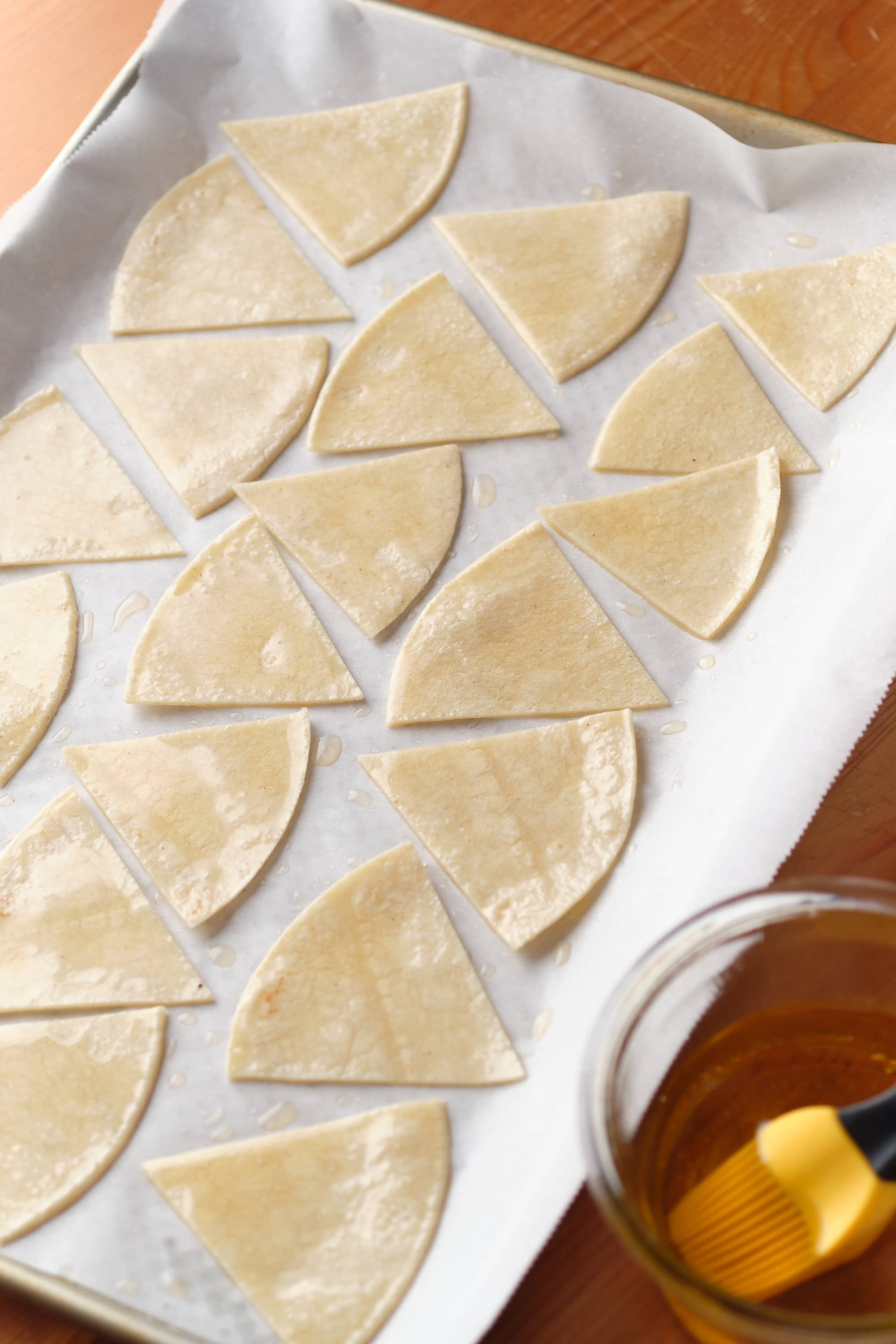 Cut round corn tortillas in to 6 triangles. Place on a sheet pan lined with parchment and brush with corn oil. Bake 15-20 minutes at 400°F.

You could of course use any protein you’d like for this recipe. Chicken, steak, pork, shrimp, or beans will all be great. The chorizo I purchased was lean and well seasoned which was perfect for these nachos.

When I prepare meat or beans to put on the nachos I like to give it a quick stew with some onions, garlic, and tomatoes. This makes more of a paste or a sauce that helps bind the nachos together. 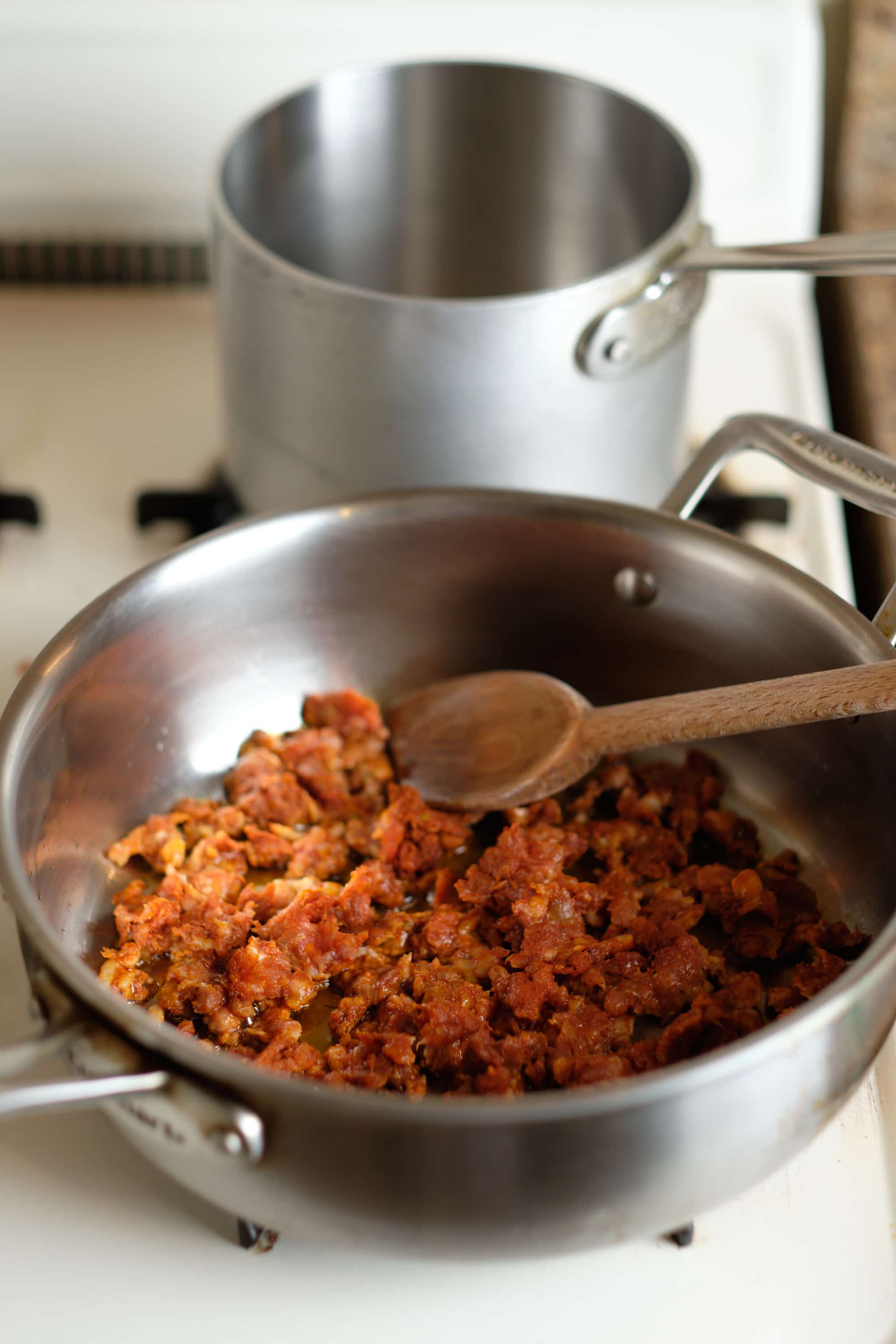 Heat Chorizo in a skillet until cooked through. 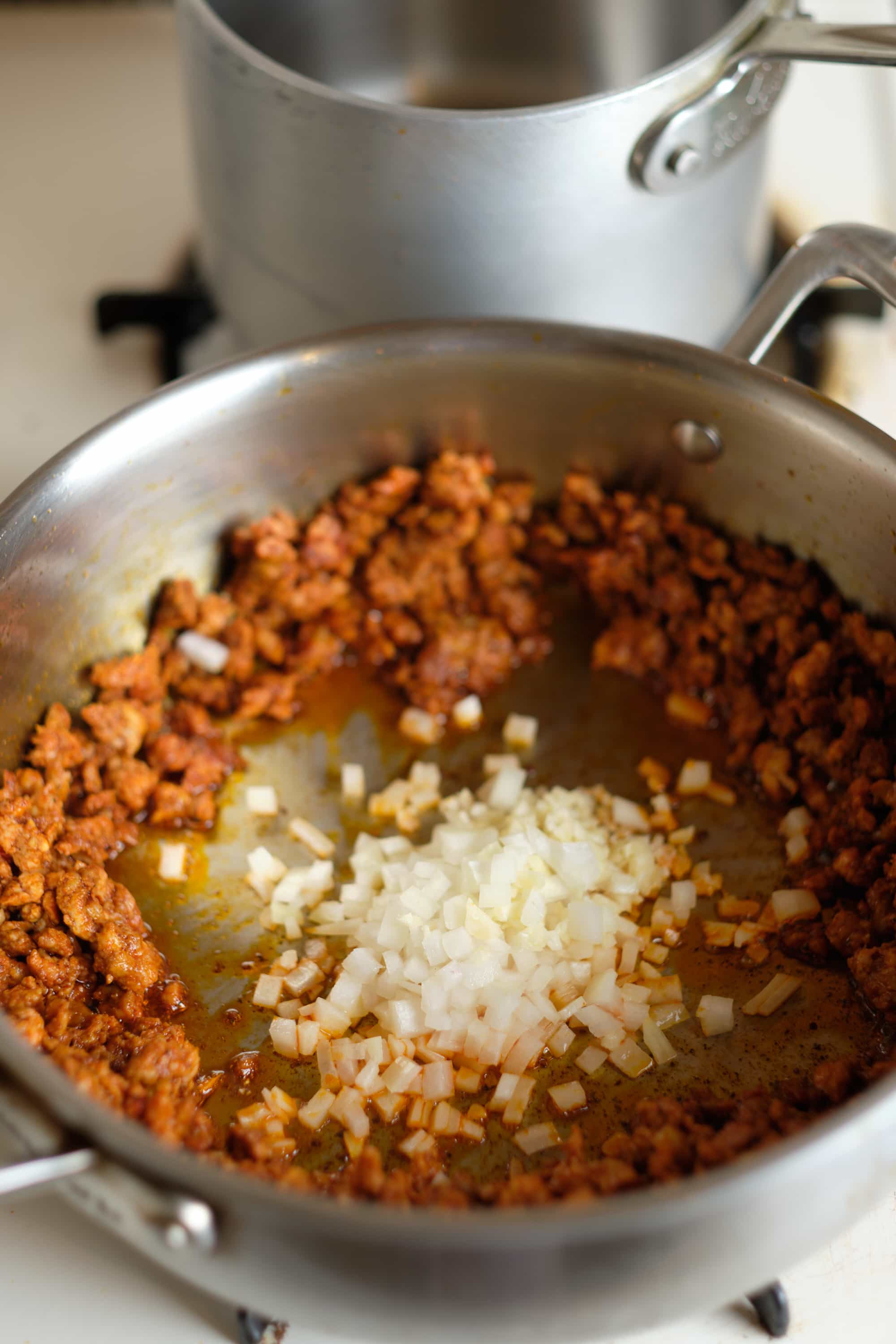 Move chorizo to the side of the pan, add onions and garlic. Heat until onions are tender. 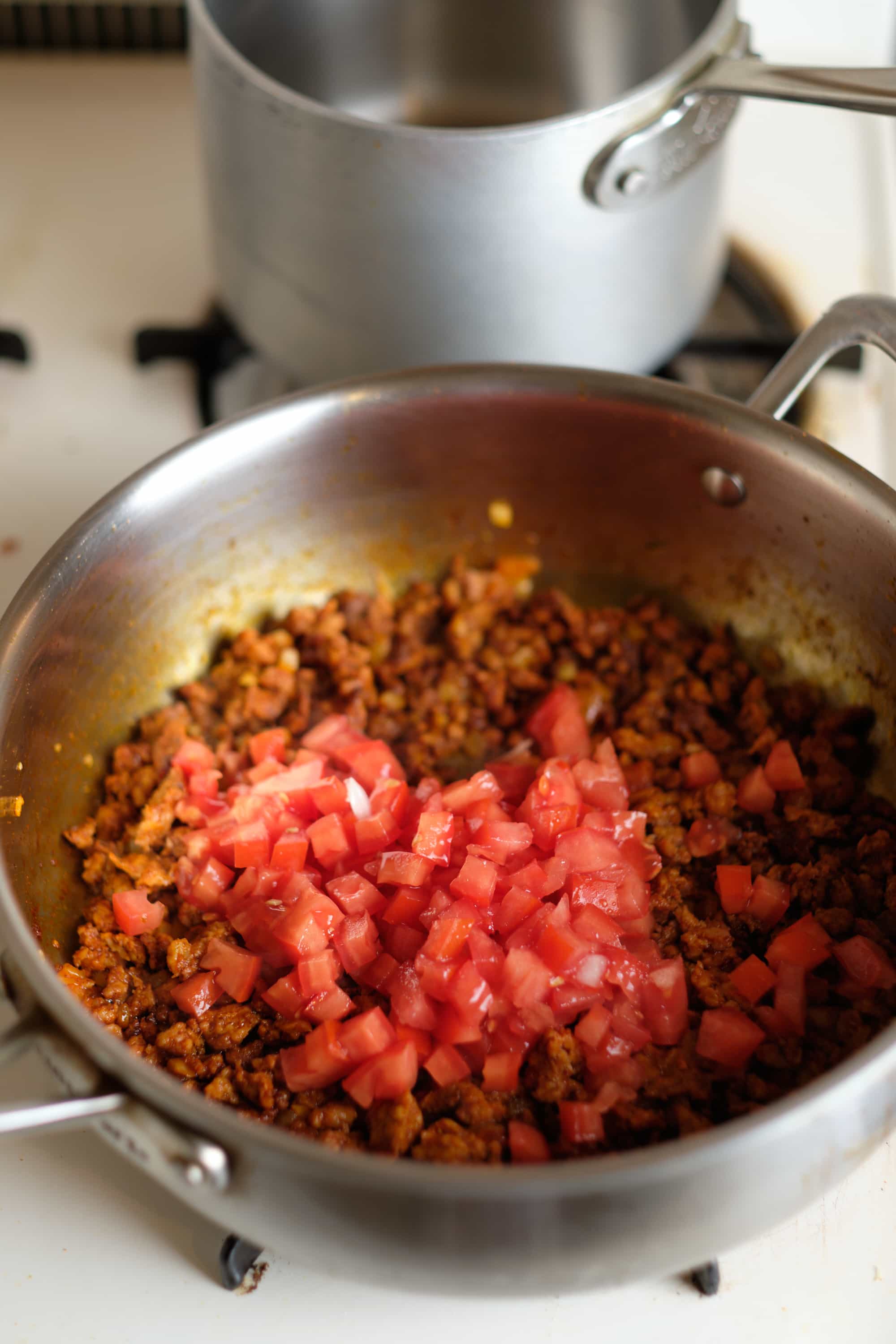 Add in diced tomatoes and cook for 2 minutes. Stir in a half cup of water and cover. Simmer 15-30 minutes or until water has mostly reduced.

Break up the chorizo and add to some oil in a hot pan. Heat through stirring occasionally. Move the chorizo to the sides of the pan and add the onions and garlic. There’s enough oil in the chorizo that you may not need to add anymore. Cook the onions just until they’re tender then add the tomatoes. Stir everything together and add a half cup of water or stock. Cover the pan and simmer over low heat for 15-30 minutes until most of water has cooked off. 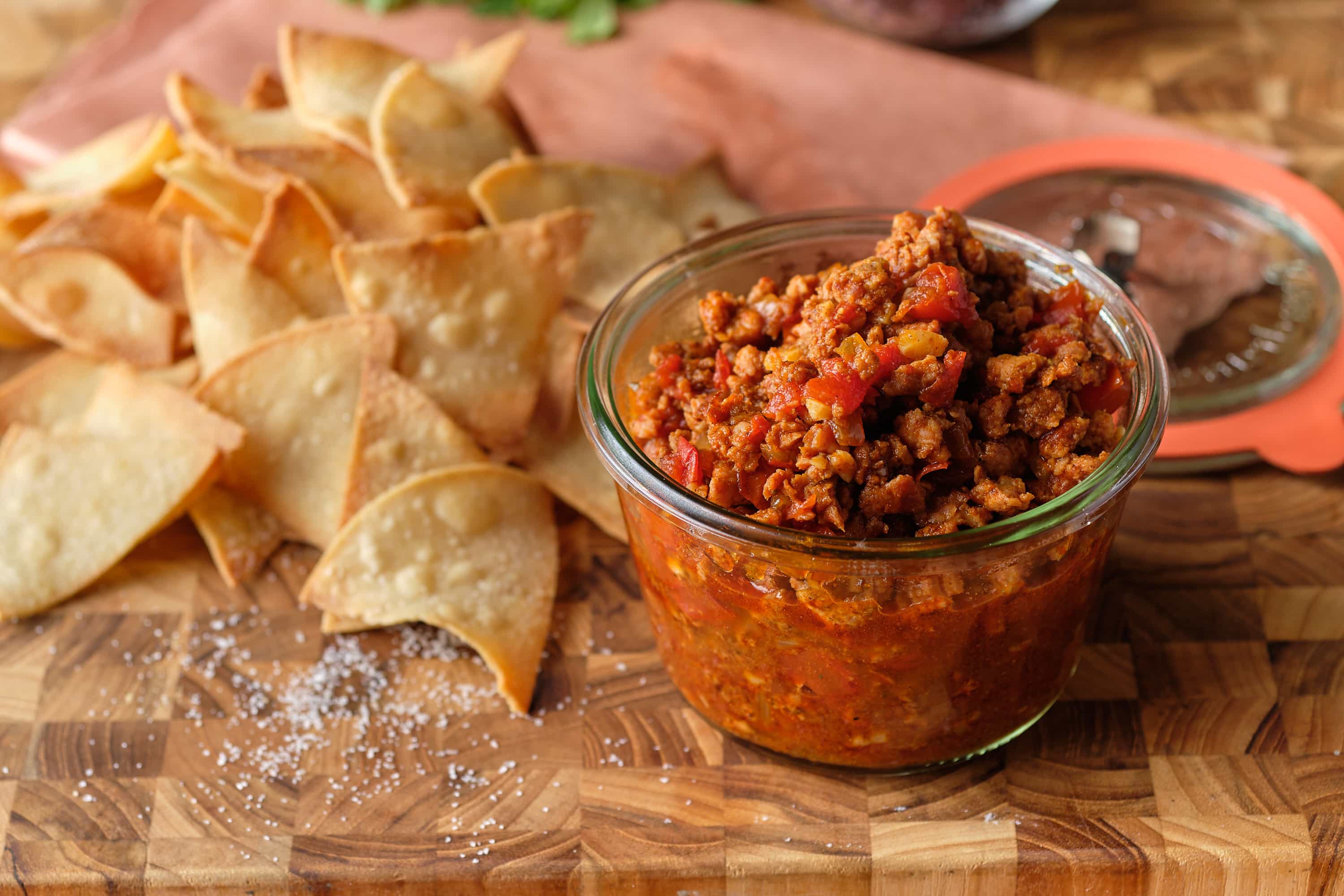 Chorizo Sauce or is it Gravy?

These may be chorizo nachos but the star of the show is the Nacho Cheese. You might be temped to just throw some shredded cheddar on your nachos and call it a day. That’s fine if you’re in the mood for shredded cheddar and tortilla chips. Go ahead and cook that in the microwave while you’re at it. Meanwhile, the civilized world is using a secret ingredient scientifically spelled out as the must have ingredient for homemade nacho cheese. 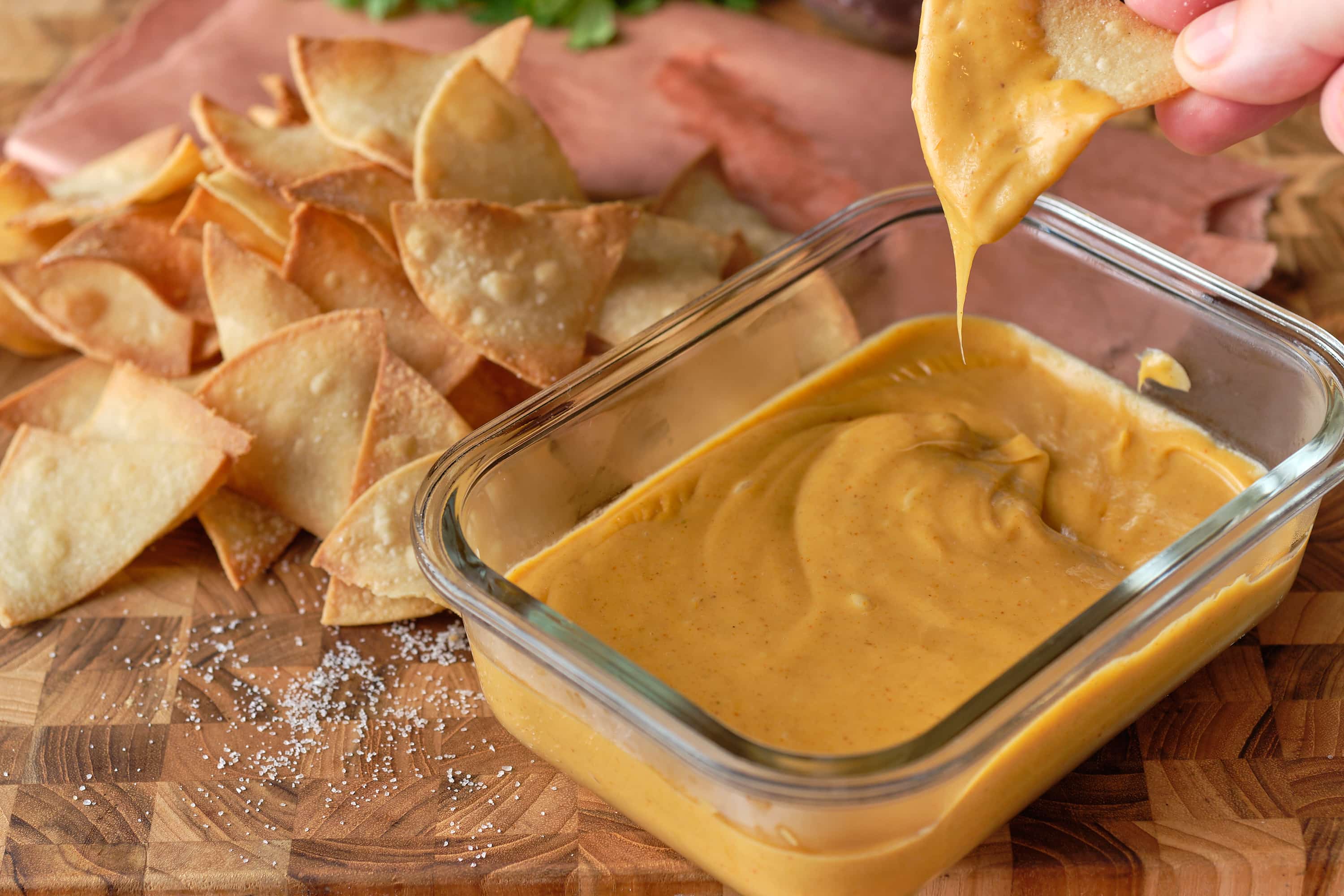 Heat a half cup of milk in a medium sauce pan. Whisk to dissolve 2 teaspoons of sodium citrate, 1 tsp cayenne, and 1/2 tsp cumin in the warm milk. Slowly add 10 ounces shredded cheddar cheese as you whisk to emulsify the sauce.

Na3C6H5O7 or Trisodium Citrate is a biproduct of citric acid fermentation used as as emulsifier to make cheese creamy. Let me say that again, put Na3C6H5O7 in your cheese to make Nacho Cheese. It’s science!!

I usually recommend using whole milk to emulsify with the cheese. This time I tried using Oat Milk and found that it worked out pretty good. There’s no reason why you’d want to do this other than maybe you, like me, don’t often have milk in your fridge.

Heat a half cup of milk in a medium sauce pan. Whisk to dissolve 2 teaspoons of sodium citrate, 1 tsp cayenne, and 1/2 tsp cumin in the warm milk. Slowly add 10 ounces shredded cheddar cheese as you whisk to emulsify the sauce. For best results use an emersion blender. 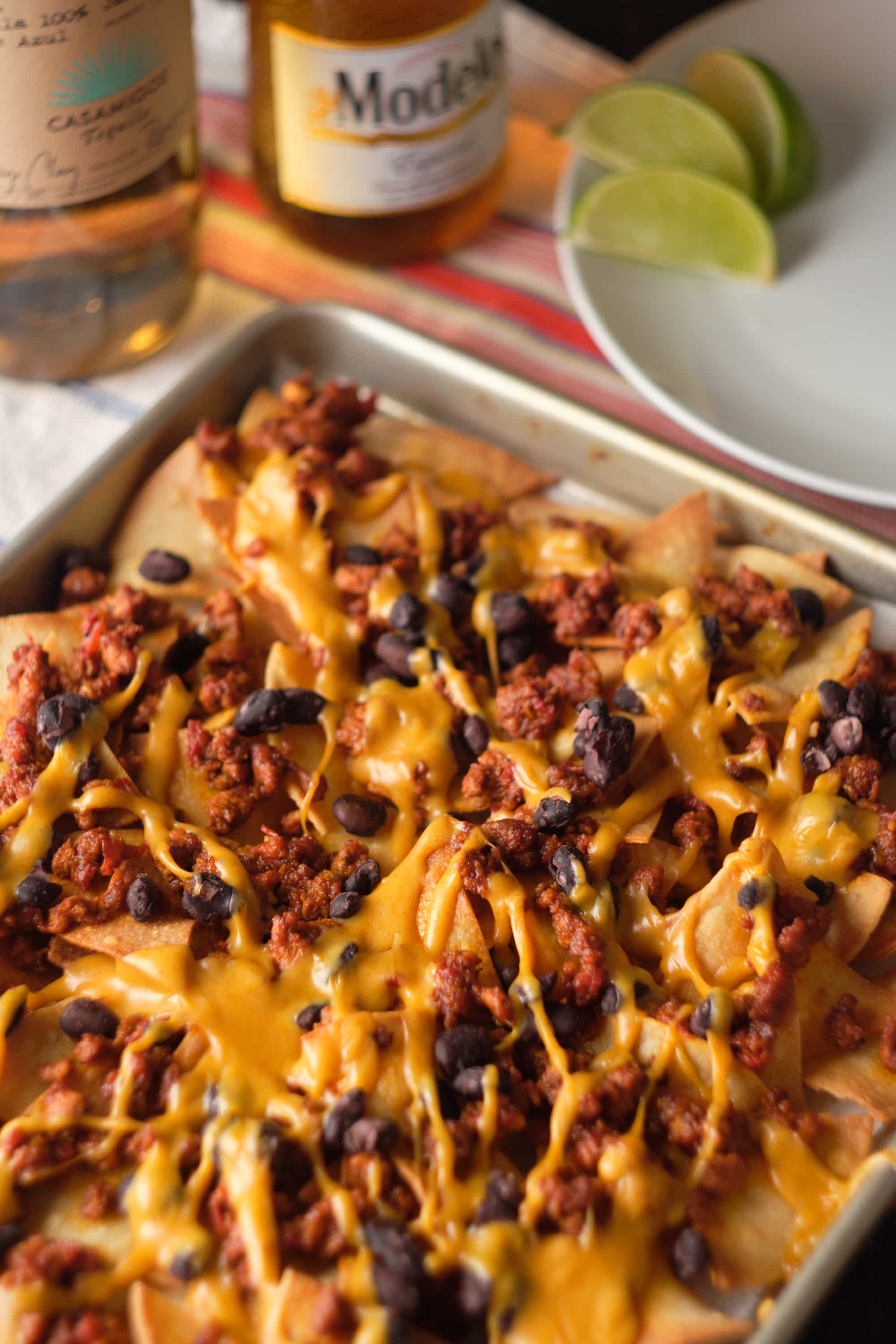 This Nacho Cheese is spiced with Cayenne and Cumin!

So, we have homemade tortilla chips, a chorizo sauce, and homemade nacho cheese. You could basically call it a day just with these three ingredients. I actually did call it a day at this point. It was getting late so I just stored the chips in a zip top bag and the chorizo and cheese in the fridge. There’s no reason you can’t prep ahead so you can whip these nachos together right before kick off. 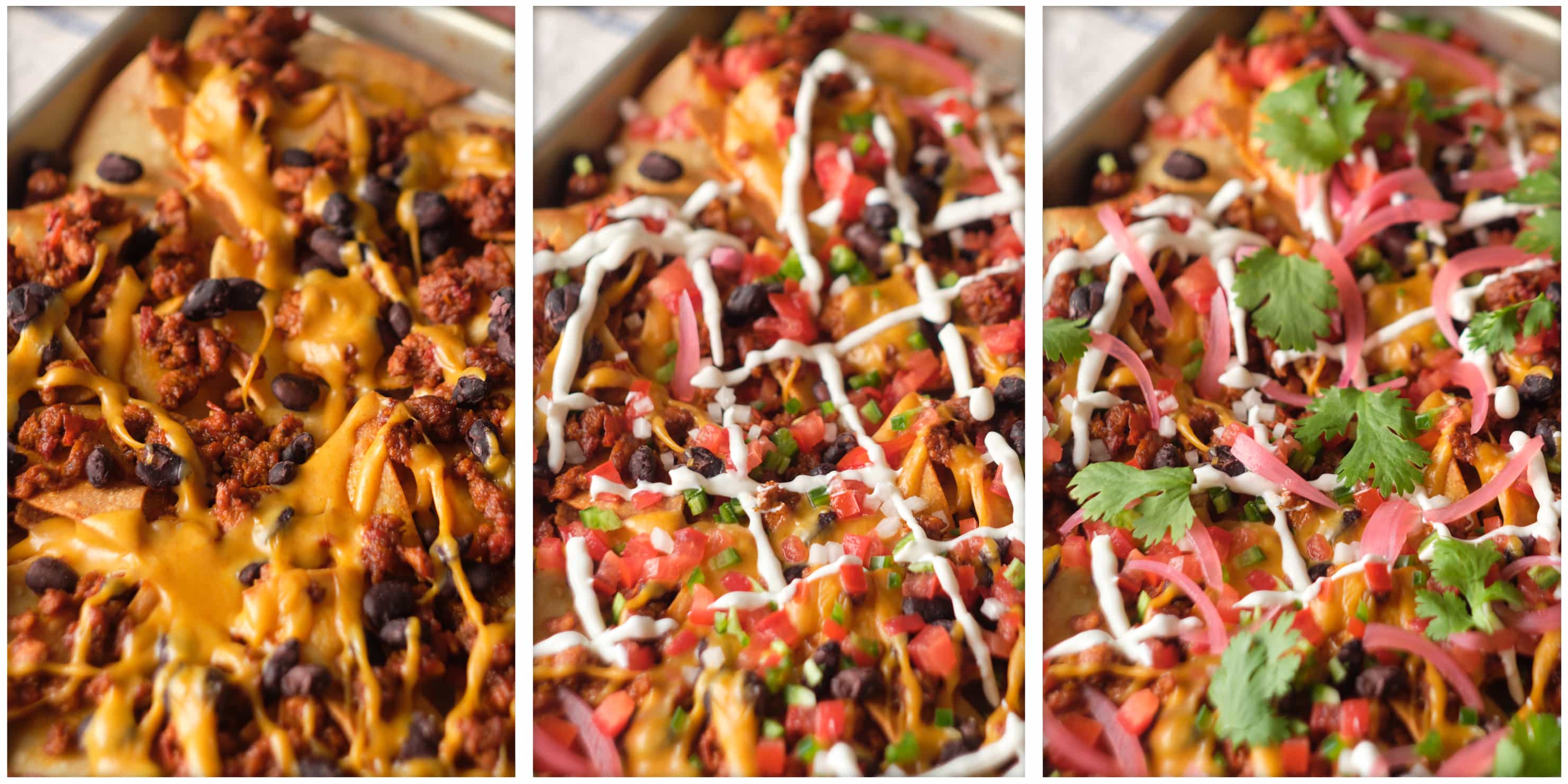 Scatter a layer of nachos on a sheet pan. Layer with chorizo, black beans, and nacho cheese. Place in a 300°F oven for 10-15 minutes. We just want to warm everything so they settle together and create a bond.

My first post-oven layer includes finely diced tomato, jalapeño, and white onion. I like to finely dice these ingredients so they add a bit of texture. And because they look like confetti – fun! Then I pipe some sour cream in a crisscross pattern over the whole pan. I do the piping by placing the sour cream in a plastic bag and cutting a small tip off one of the corners. Totally simple way to make something look profesh.

If the first layer is the icing, this layer is the cherry on top. I’m huge fan of pickled red onions. I could put them on anything – probably even cake and ice cream. They take about 10 minutes to prepare then about 40 mins to chill in the fridge. I also love pickled jalapeños so it was a tough decision as to which I’d put on my nachos. Ultimately, pretty in pink won the decision. Also, cilantro. Of course.

As I alluded to in the intro, the most important part of this recipe is the nacho cheese. I think it should be more substantial than the stuff you can get in a jar and in no way should it be shredded cheese. Get some sodium citrate and try it out!

Be thoughtful with your nacho assembly. Nachos are one of the top 5 fun foods – or at least top 5 bar foods that you eat while watching sports. So if you’re going to make some at home, make em worth it. Think in layers; Nachos > Warm Toppings > Cool Toppings > Garnish.
Hopefully this post can be read as more of a suggested blueprint than a recipe. Plan out your nachos and have fun with them!

This is one of my all-time favs. 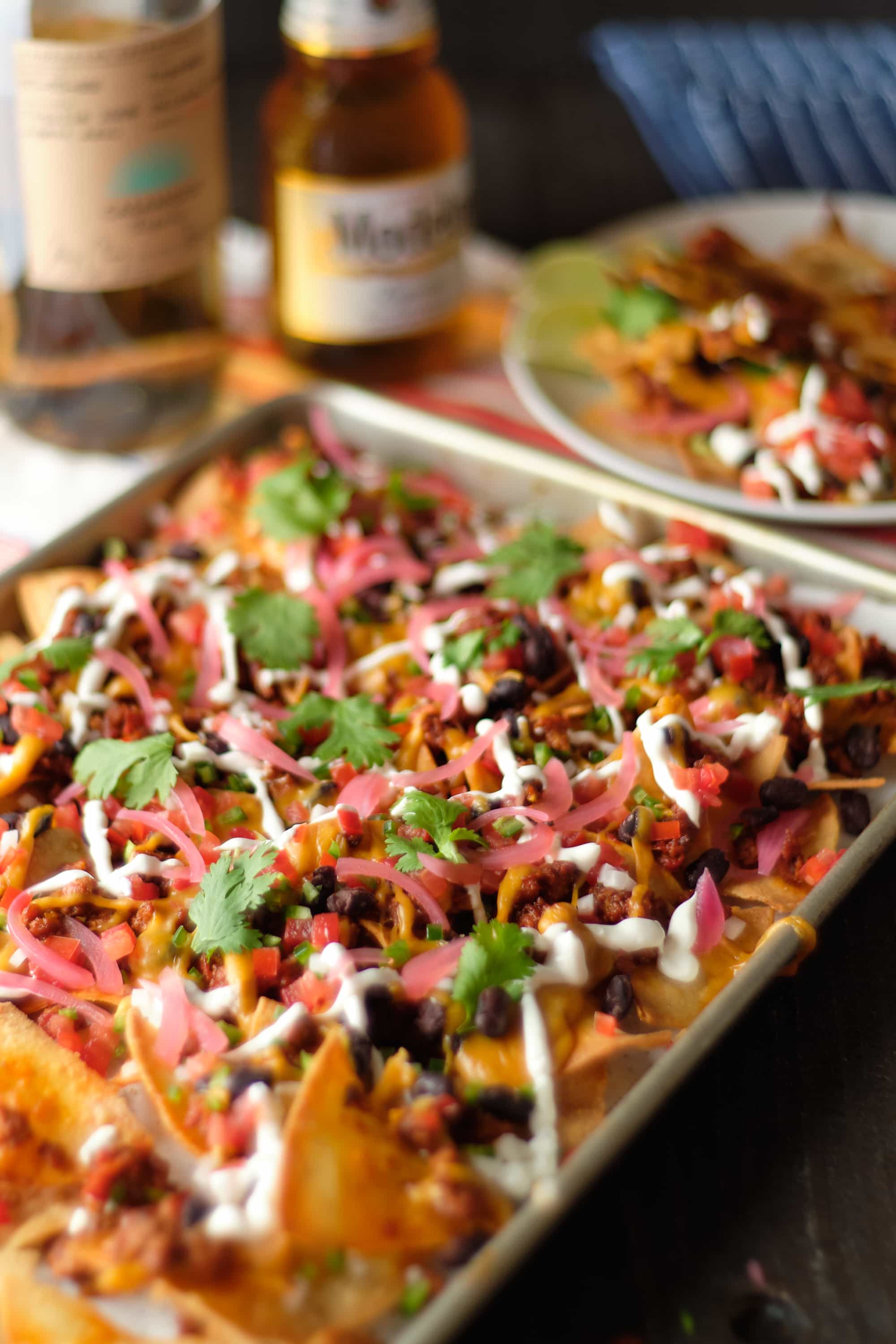 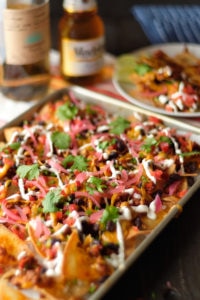 Course: Snack
Cuisine: Mexican
Prep Time: 30 mins
Cook Time: 1 hr 45 mins
Servings: 4
Do you really need a recipe for Chorizo Nachos? Prob not. How about making your own Nacho Cheese?? Read on for the cheesy deets and other helpful Nacho Assembly Tips (N.A.T.s).
Print Pin

1 1/2 hour cook time is how long it took me to make 6 batches of chips in my tiny oven. If you're buying chips, your cooking time is about 30-40 minutes all together for the chorizo and nacho cheese plus 15 to warm the nachos. 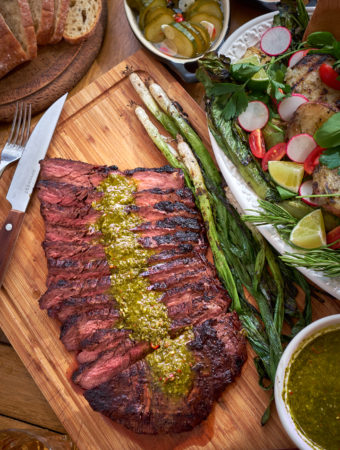 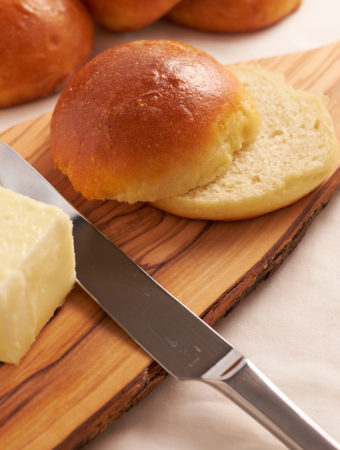 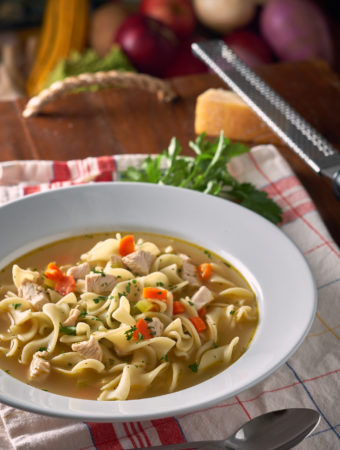 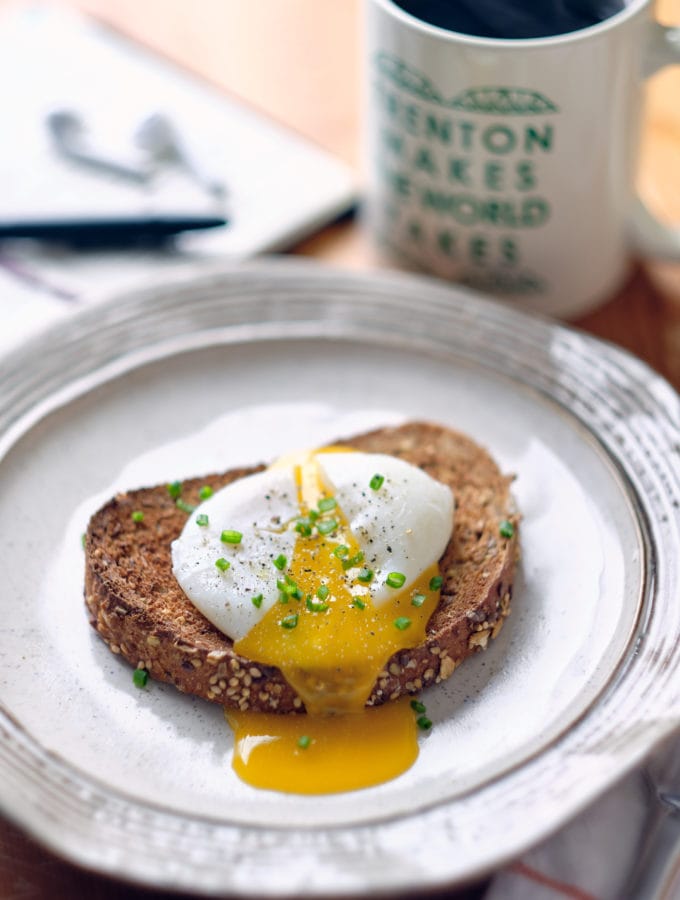 Allspice Dram is a rum-based liqueur infused with

This Apple Galette has all the Apple Pie flavor wi

ANGEL FOOD CAKE I made a heavenly light Angel Food