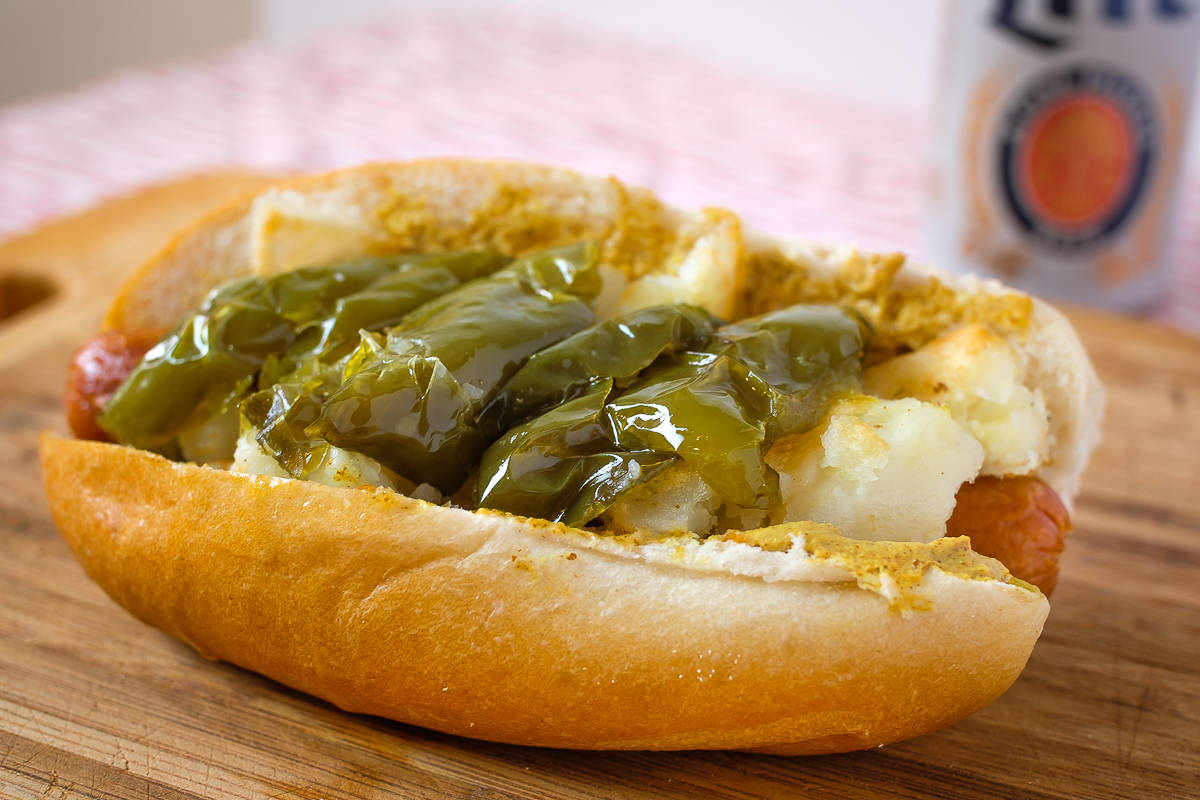 Traditionally, ‘our’ Italian Hot Dog is served on an Italian bread torpedo roll, has fried peppers and potatoes and comes with deli mustard.  I par boil my potatoes before crisping them up in some oil.  My peppers are essentially slow braised in olive oil while you make everything else.  When I assembled and bit in to my family’s trademark sandwich, I was transported back to the very first one I had with my dad at the counter of the Casino.  I’ve eaten some pretty incredible food in my life but nothing has ever made me smile as much as this single bite.  To make this at home, keep it simple.  Think about how this would have been made in a food cart in 1935. And, for the love of God, NO ONIONS.

According to family legend, my great-grandfather Canio, who emigrated from Montemilone Italy in 1922, created the Original Italian Hot Dog in the early 1930’s.  He had a food cart outside the state house in Trenton NJ selling hot dogs loaded with potatoes and peppers on a torpedo roll.  He’d run back and forth between his food cart and the market to get fresh produce, earning him the nickname Tony Goes.  This would be the name of his first restaurant which would later become The Casino.  In one article I found, it claims he worked with a local bakery to “develop the concept and create the torpedo roll”.  I also found an archive dated 2011 where my cousin Michelle backs up the claim that Nora Jones used to play there at night.

On Thursday, October 7, 2004, The State of New Jersey, Senate and General Assembly passed a Joint Legislative resolution that honors and salutes the Casino Restaurant (Tony Goes).  In celebration of the resolution, proclamation and the 70th anniversary of the Casino Restaurant, the third generation owners, joined by the Assembly Senators, Councilwoman, County Clerk, Dignitaries, customers, and many friends renamed Casio’s creation, the Casino’s Original Italian Hot Dog, as “The Jersey Dog” – The Official Sandwich of New Jersey.

For the record, I have not been able to verify the previous statement is true.  I can verify that Assemblyman Tim Eustace sponsored legislation in April 2016 “designating the Taylor Ham, egg, and cheese sandwich as the New Jersey State Sandwich and supplementing chapter 9A of Title 52 of the Revised Statutes”.  Trying to prove NJ already has a state sandwich has been difficult from the comfort of my MacBook.

When I tell people my great-grandfather invented the Italian hot dog, I have to add that someone else created an Italian hot dog in Newark NJ around the same time.  They don’t even look a like though, so Tony Goes is the one you’re probably thinking about. 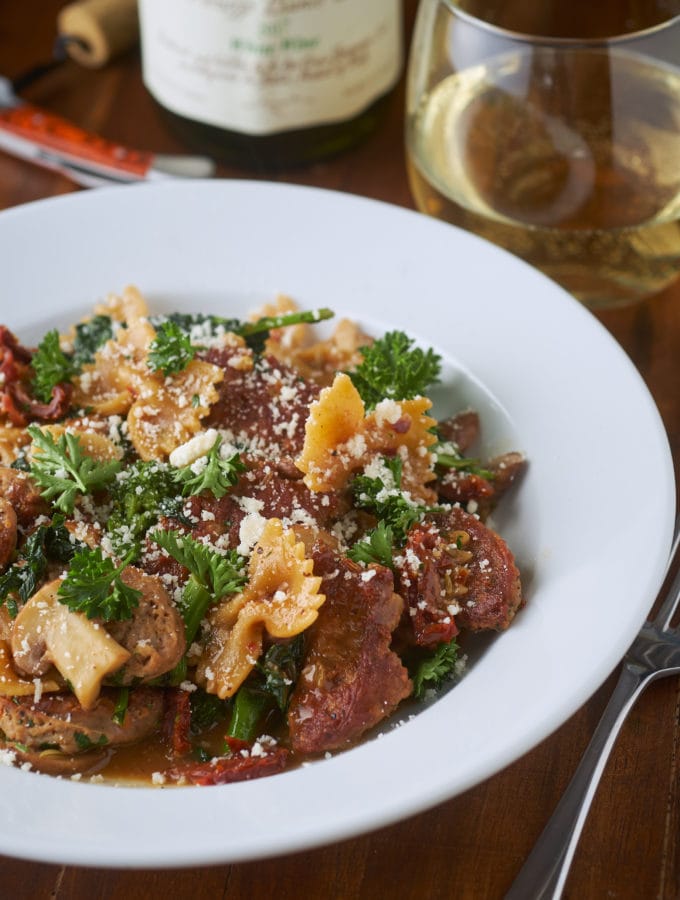 Sausage and Mushroom Pasta with Sun Dried Tomatoes, Broccoli Rabe, and White Wine is a nice 2-pot dinner to whip up in under 30 minutes. Make this recipe once then riff on it later with whatever you have in the fridge. Bring a pot of water to boil to blanche the broccoli rabe then use…

END_OF_DOCUMENT_TOKEN_TO_BE_REPLACED 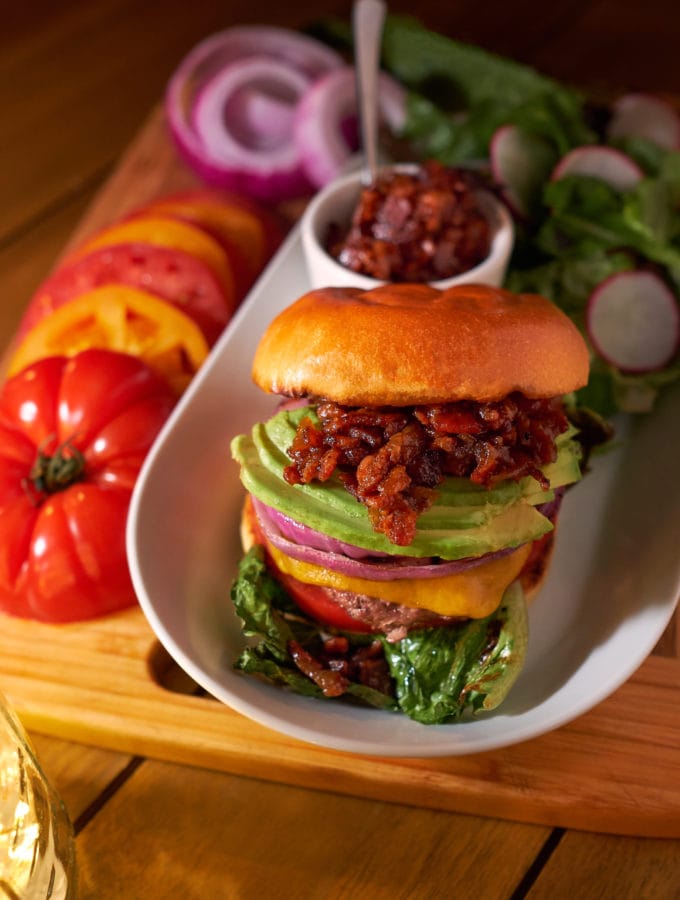 Oh yeah. Bourbon Bacon Jam is 100% my new jam! Bacon Jam, Egg, and Brie anyone? The first time I ever had or even heard of Bacon Jam was at one of my favorite local Restaurants in Philly, The Blind Pig. Chef and Co-Owner David Hentz uses Bacon Jam on his burger “Against Doctor’s Orders”….