Tomato Cheese Crostini aka Mini Pizzas. Make these for your next dinner party, cocktail hour, or just for stuffing your face while Netflixing. No judgement here at the Eat Up! Kitchen. They’re so good I must just come over to join you.

You could make these Tomato Cheese Crostini with practically any ingredients. It’s basically bread, cheese, tomatoes, basil – it really is a mini pizza. What I want you to do, though, is make these with really awesome ingredients. You probably won’t make them everyday so I think it’s worth spending two to three times what you’d normally spend on the good stuff.

This French Baguette is currently my favorite bread. Ever. There’s a new bakery near me in Philly called The Kettle Black. They’re kind of known for making bagels with activated charcoal. This results in a pitch black bagel. It’s cute but it’s also damn delicious. This bakery, only two blocks from me, is everything I want in my bread life. I’m especially in love with their perfect French Baguette. When I start this Crostini post saying you should use really good ingredients, I’m saying don’t make this unless you can find a bread you can call your favorite.

Tomatoes. Fantastic tomatoes are sometimes hard to come by. For the most part I’ve found that grape or cherry tomatoes are sweeter and more consistent than their plum, beefsteak, or vine ripe counterparts. I like to just add a tablespoon of good olive oil in a large skillet and toss a whole pint of grape tomatoes in there until they start to break apart. Maybe toss in a bit of fresh basil to boot. If you can’t get grape tomatoes you could use canned diced tomatoes instead.

You want a semi-soft aged Italian or French cheese for this Crostini. Something with some funk to it so you know it’s there. You don’t want to mistake your $10-$20 cheese investment for Philadelphia Cream Cheese. A goat or sheep milk cheese would be very nice but cow’s milk would also work. Fontina is a long time favorite of mine but I used some blended cheese that was an in-house special at Whole Foods for this. It was very good but I threw out the label :-(. If you’re making this for a party the type of cheese can really set this hors d’oeuvre apart from the others – so be adventurous!

Use a wire rack to toast your crostini in the oven. The rack makes it easier to work with them and provides even toasting. still, I like to flip them halfway through the initial toast in a 400°F oven. It really depends on the kind of bread you have for the timing here. Mine took about 8 minutes to toast without browning. Once they’ve toast then you can add some cheese on top. Return to the oven or broiler and melt the cheese. You’re not looking for an ooey gooey lava flow here – just warmed through. Remove the crostini again and apply a decent amount of cooked tomatoes. Top with freshly minced basil and serve. These are great hot out of the oven (watch your mouth!) but also really good cold after sitting around for a couple hours while you marathon the latest Stranger Things episodes. 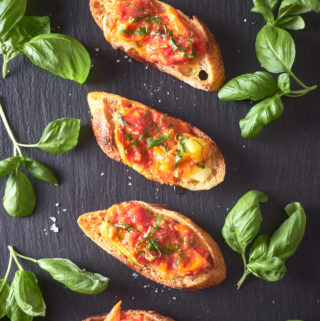 Anthony
Tomato Cheese Crostini aka Mini Pizzas. Make these for your next dinner party, cocktail hour, or just for stuffing your face while Netflixing. No judgement here at the Eat Up! Kitchen. They're so good I must just come over to join you.
Print Recipe Pin Recipe
Prep Time 10 mins
Cook Time 12 mins
Total Time 22 mins
Course Hors d'oeuvres
Cuisine American

party foods
This post may contain affiliate links. I may get a tiny kickback from your purchase.