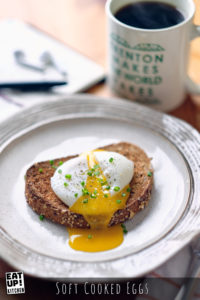 There was some time a couple of months back where I kept overhearing conversations about the best way to cook an egg. I genuinely wasn’t sure so I didn’t have anything to add to the conversation. What do you do when you’re not smart enough to talk about something? YOU JUST SAY WHAT YOU THINK A LOT LOUDER THAN EVERYONE ELSE. No. That is not what you do. You research and learn about the topic to have a better informed opinion. So, let’s get crackin’!

The first thing I was interested in testing was the age of the egg. Some say you need fresh eggs. Others say you need old eggs. Welp, I failed right off the bat. Although I bought one pack of eggs then waited two weeks to buy the second pack, the ‘best by date’ was exactly three days different between the two.

Plan B – test eggs straight from the fridge versus at room temp. In my images below I placed the cold eggs on the left and the room temp eggs on the right. I graded them on an A-F scale based on how well the shell peeled from the egg. Spoiler – room temp sucks. Scientifically though, I’d have to test a lot more eggs to be sure if this actually made a real difference. 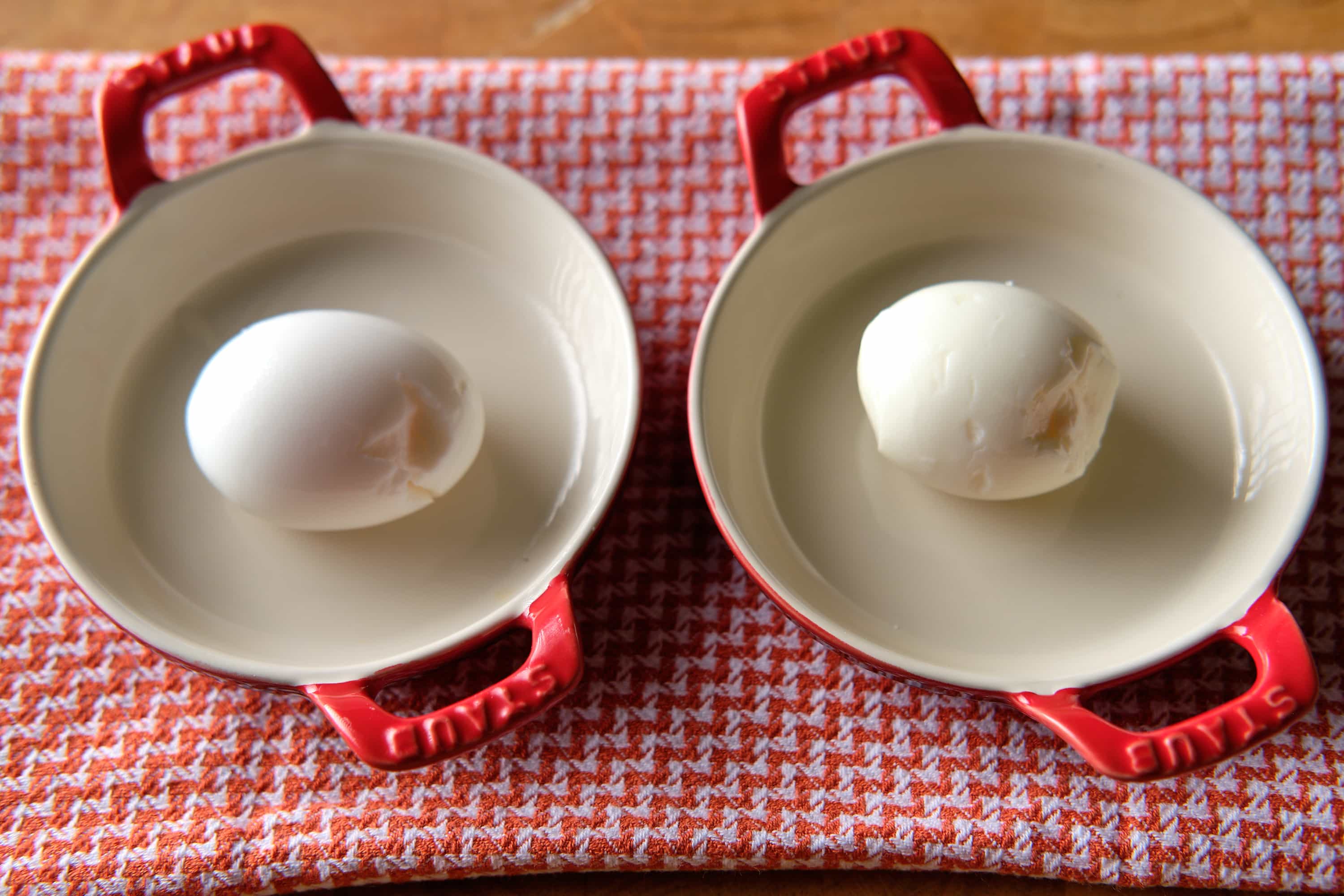 Eggs added to cold water. Bring to a simmer. Cover and set off heat for 3:30 minutes. 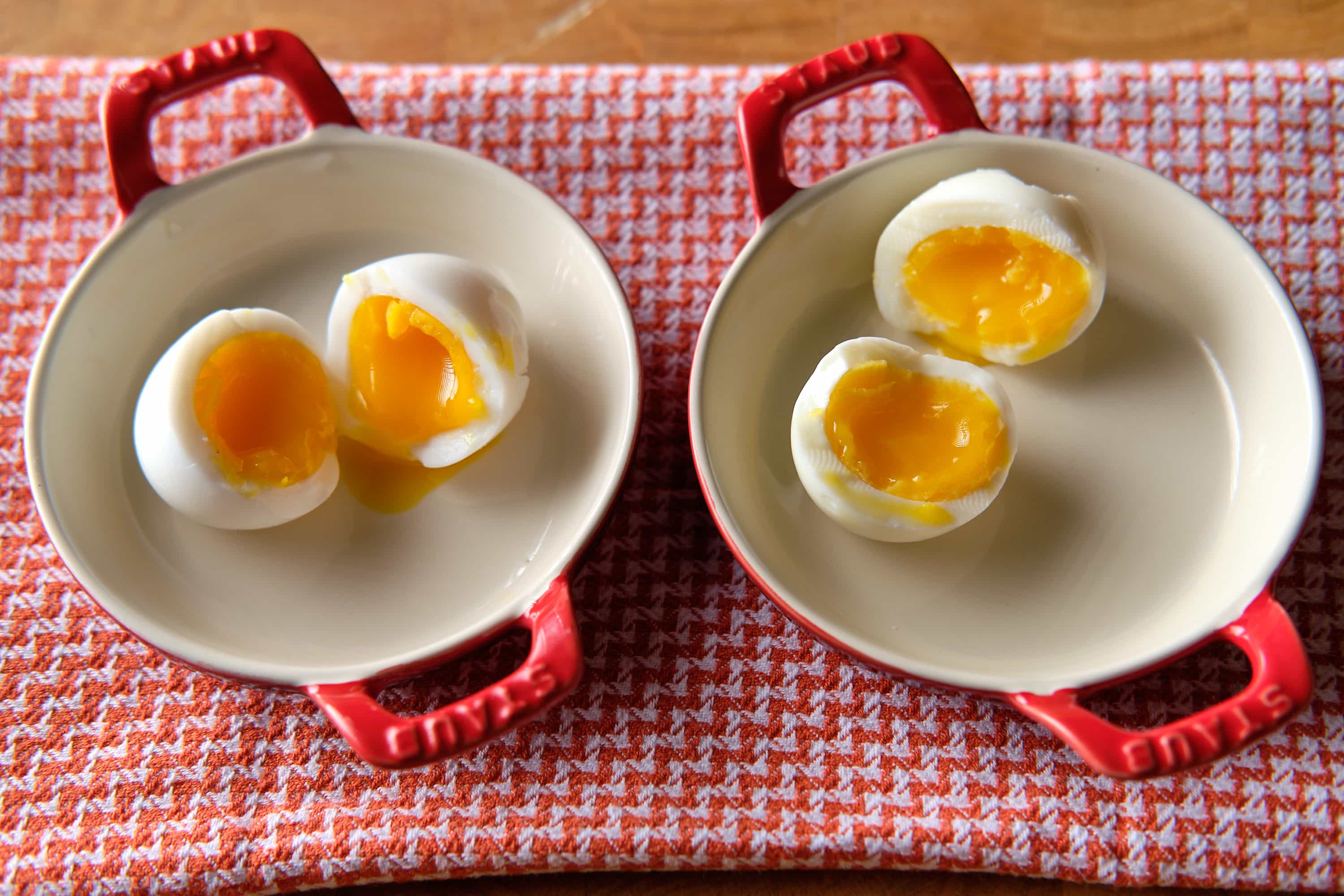 Eggs added to cold water. Bring to a simmer. Cover and set off heat for 3:30 minutes.

How to Soft Cook an Egg from a Cold Start: Place your egg(s) in a small pot and cover with water. Heat over a medium flame until the water begins to boil. Immediately remove the pot from the heat and cover with a tight-fitting lid. Rest for 3:30 minutes. Transfer egg(s) to an ice bath for 1-2 minutes before peeling.
Pros: The white and yolk were surprisingly well cooked. This could be due to the gradual increase in temperature.
Cons: The shell did not come off very easily and took some egg white with it.
Total Cooking / Cooling Time: 13:30 Minutes (8 min to boil)
Peelable Rating: Cold Egg: C Room Temp Egg: D 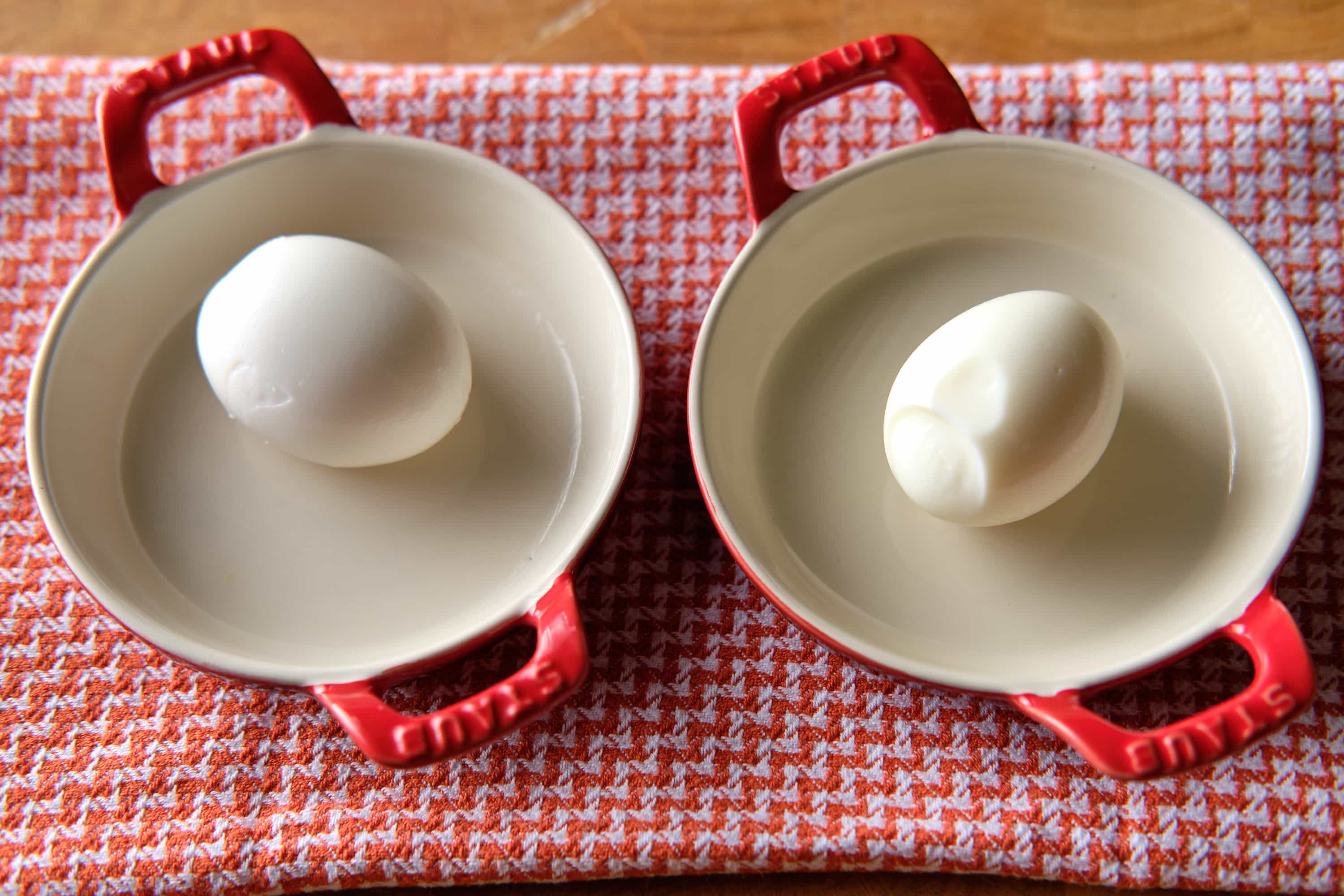 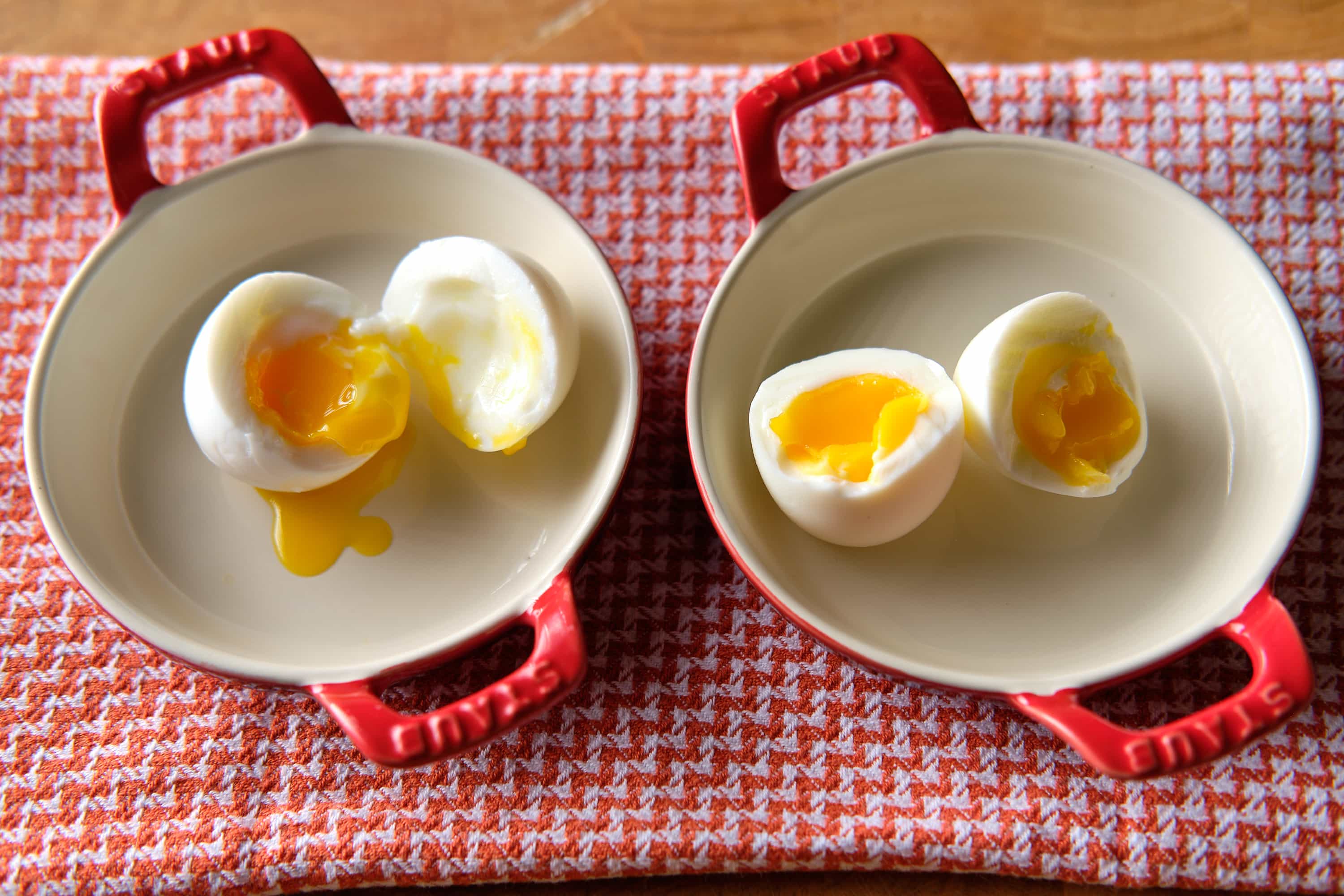 How to Soft Cook an Egg from a Hot Start: Fill a small pot with enough water to cover the egg. Bring water to a boil and reduce to a barely bubbling simmer. Place egg(s) in the pot for 6:30 minutes. Transfer egg(s) to an ice bath for 1-2 minutes before peeling.
Pros: Average results. Pretty much what you’d expect.
Cons: Yolk not fully cooked for the cold egg. Yolk slightly overcooked for room temp egg.
Total Cooking / Cooling Time: 15:30 Minutes (7 min to boil)
Peelable Rating: Cold Egg: A- Room Temp Egg: B 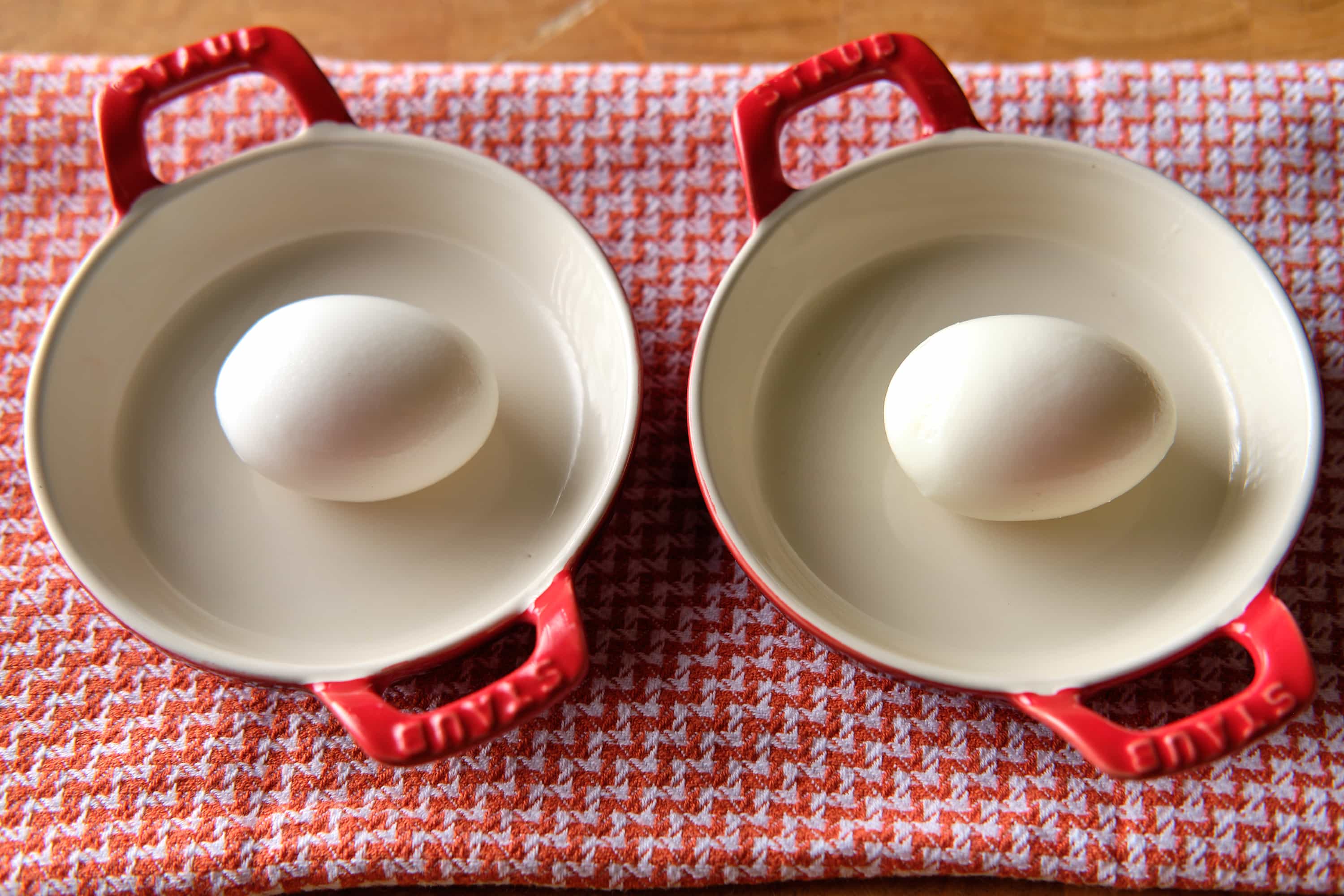 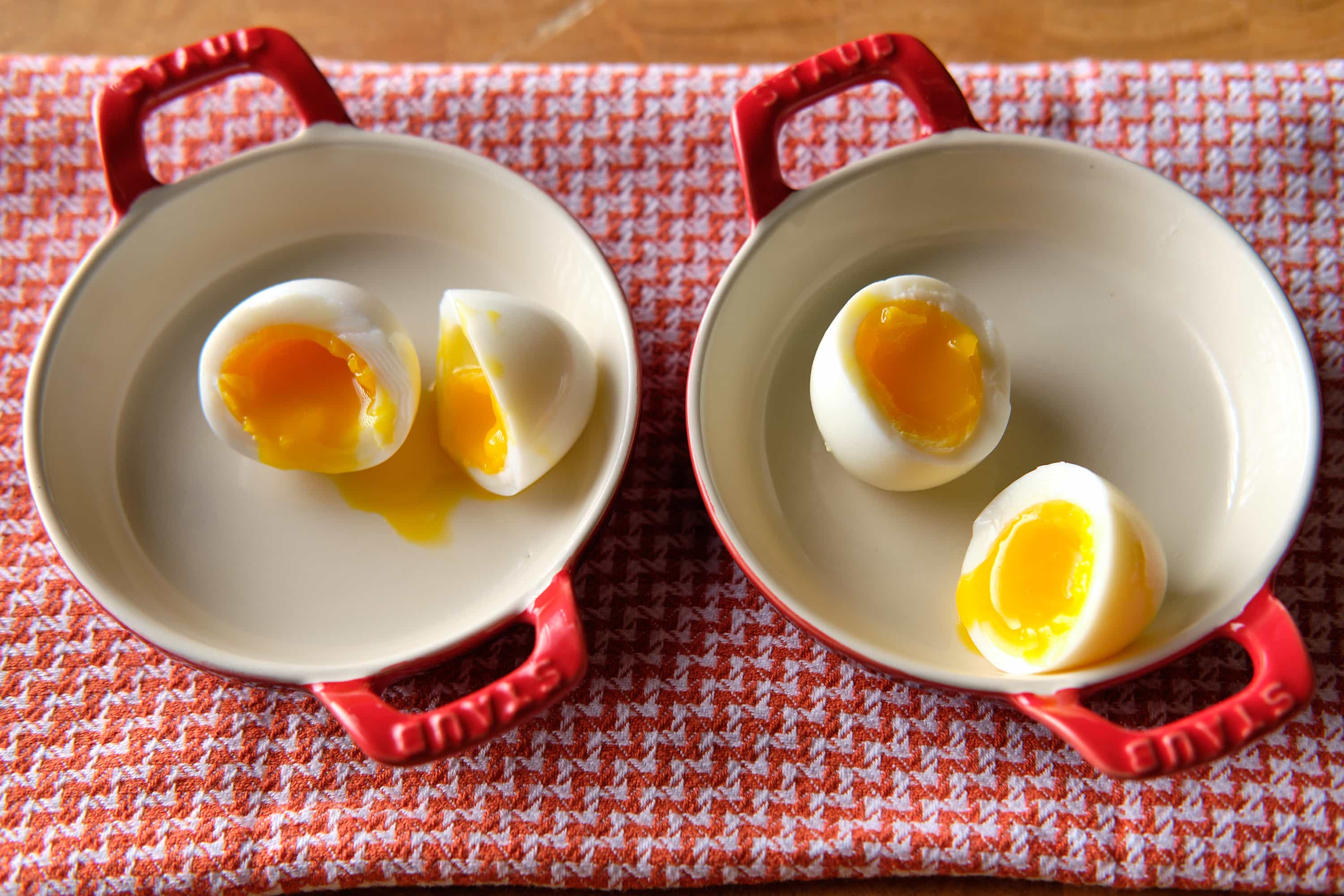 How to Steam Cook an Egg: Add one inch of water to a wide pot or wok. Place a bamboo or stainless steel steamer over the water. Bring the water to a simmer. Place the egg(s) in the steamer and cover with a tight-fitting lid. Steam for 6:30 minutes. Transfer egg(s) to an ice bath for 1-2 minutes before peeling.
Pros: Whoa! Even cooking, shell easily removed, fastest cooking time.
Cons: More than one item to clean.
Total Cooking / Cooling Time: 11:00 Minutes (2:30 min to boil)
Peelable Rating: Cold Egg: A Room Temp Egg: A 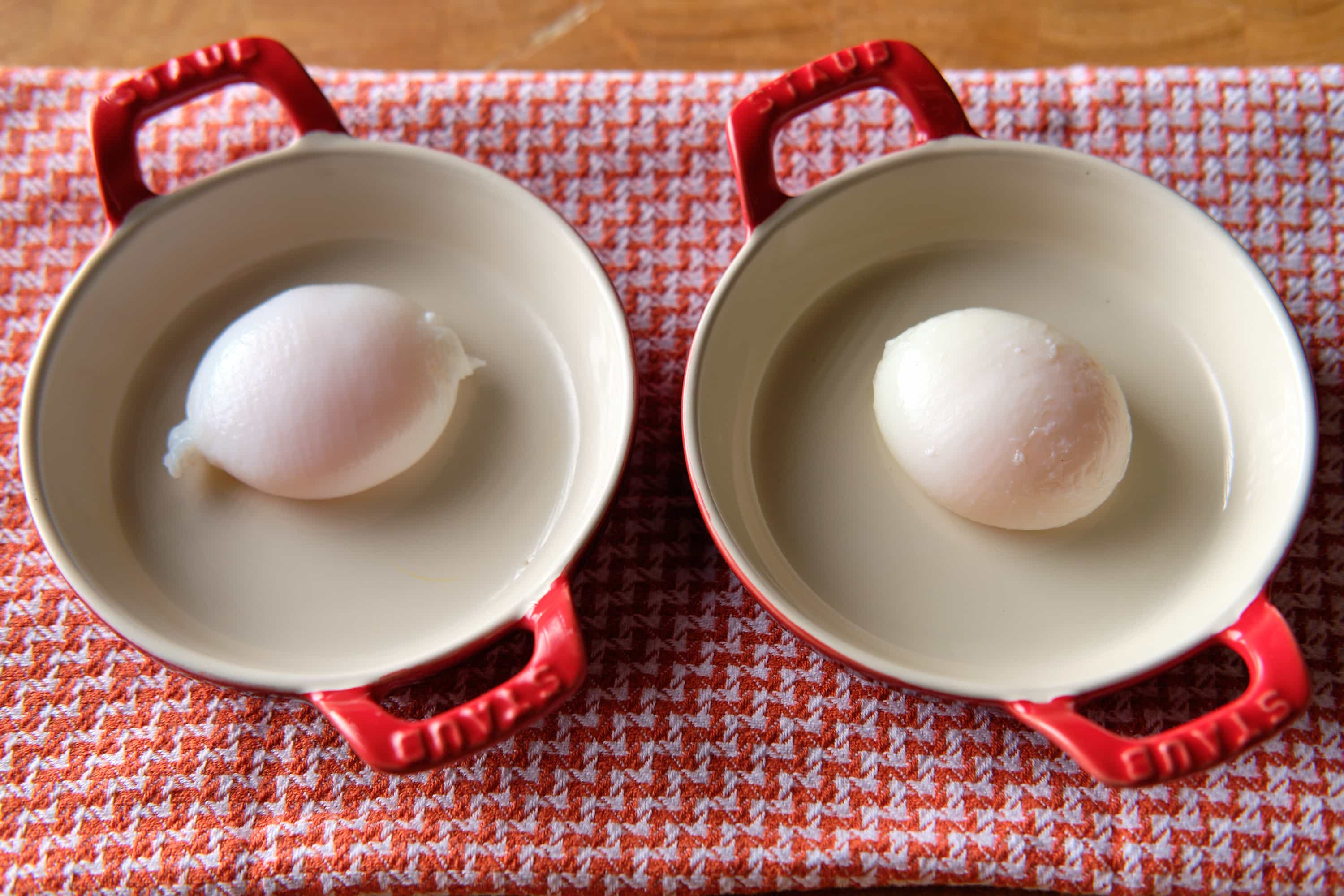 Sousvide Eggs at 145°F for 45 minutes. 1 minute simmer in hot water to finish. 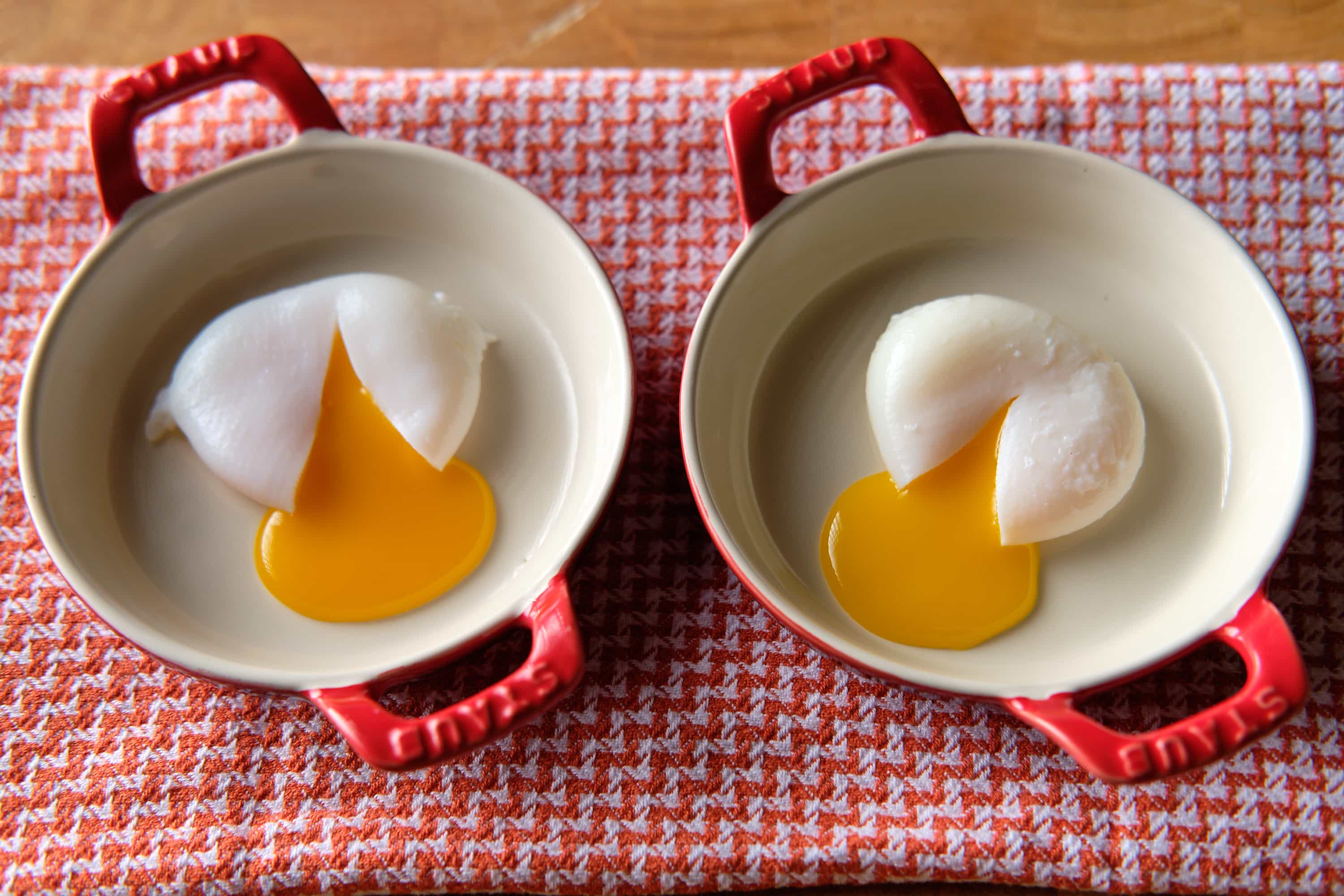 Sousvide Eggs at 145°F for 45 minutes. 1 minute simmer in hot water to finish. (the funky texture is from paper towel used to dry eggs)

How to Sousvide an Egg: Heat 2 quarts of water to 145°F in a heatproof vessel using an immersion circulator. Drop egg(s) into preheated water and cook for 45 minutes. Near the last 10 minutes of cooking, bring a small pot of water to a gentle, barely bubbling, simmer. After 45 minutes, transfer egg(s) to an ice bath for two minutes. Carefully, over a small bowl, crack around the bottom of the egg so the bottom of the shell pulls off. The egg should easily fall out into the bowl. Scoop the egg out of the bowl with a slotted spoon. Gently shake any egg-cess liquid off before lowering into the hot water. Gently stir water so the egg doesn’t stick to the bottom. Poach egg(s) for one minute then scoop out with a slotted spoon and drain on paper towel. Serve immediately.
Pros: I mean… yeaaah! To be fair, the white isn’t as solid as the other methods which makes this more similar to a poached egg. That doesn’t exactly mean this is the wrong method. Maybe it means the other methods are wrong. I tested sousvide to display an extreme example of what can be done in a perfect world.
Cons: Quite time consuming and requires special equipment.
Total Cooking / Cooling Time: 48:00 Minutes
Peelable Rating: N/A 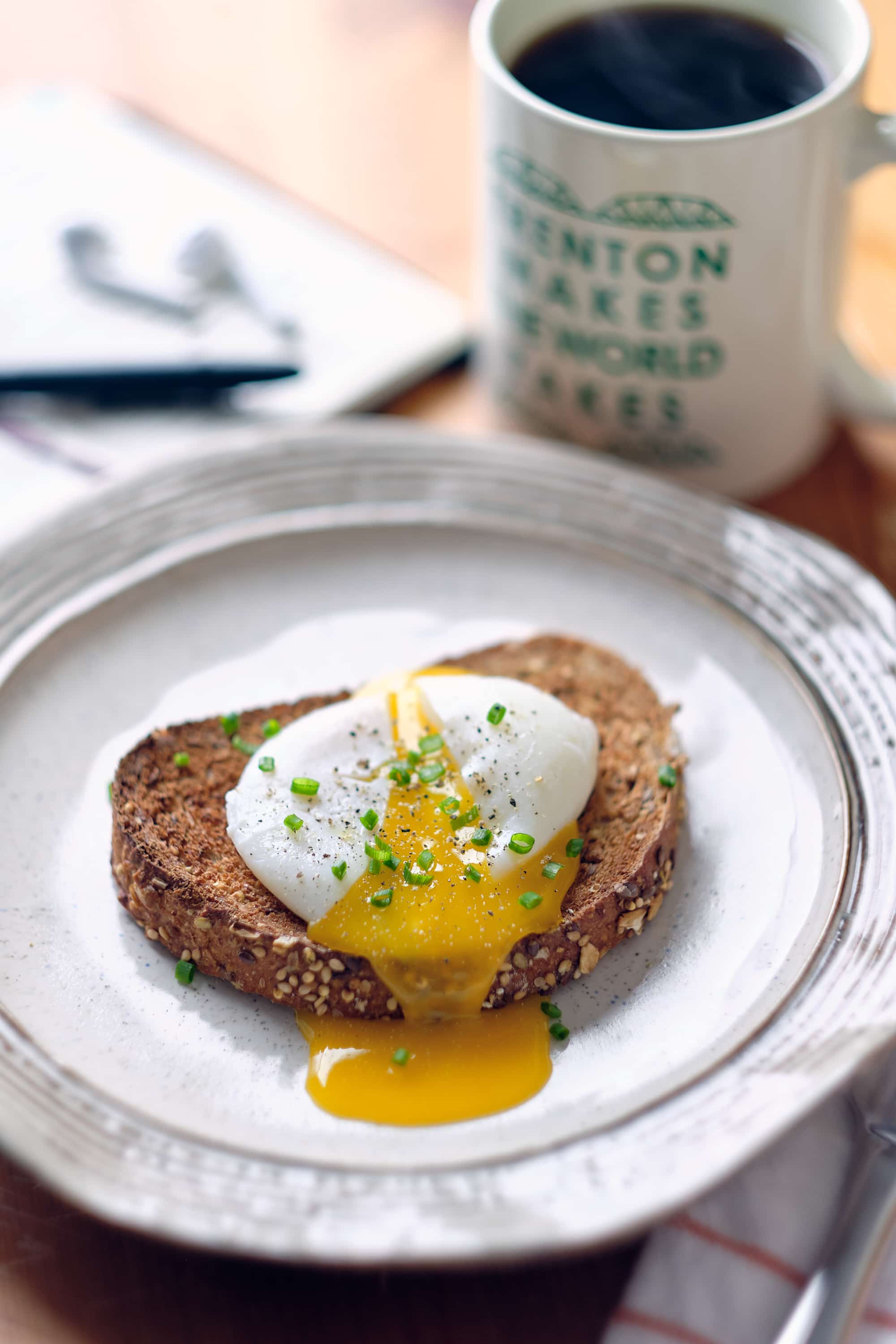 What’s the best way to Soft Cook an Egg? 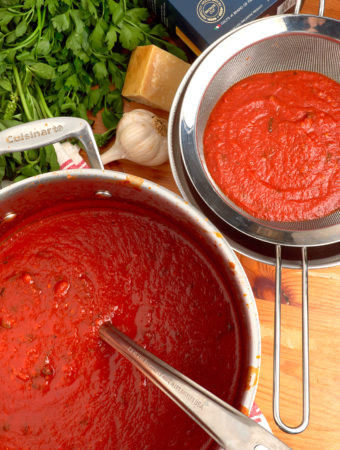 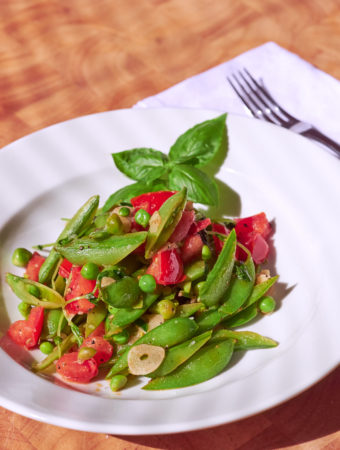 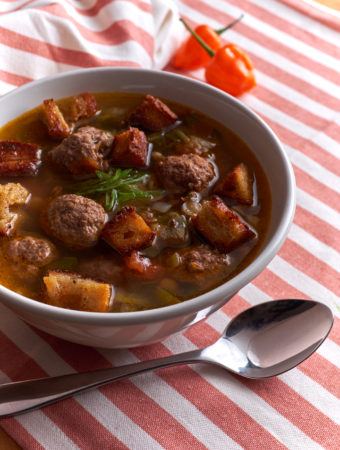 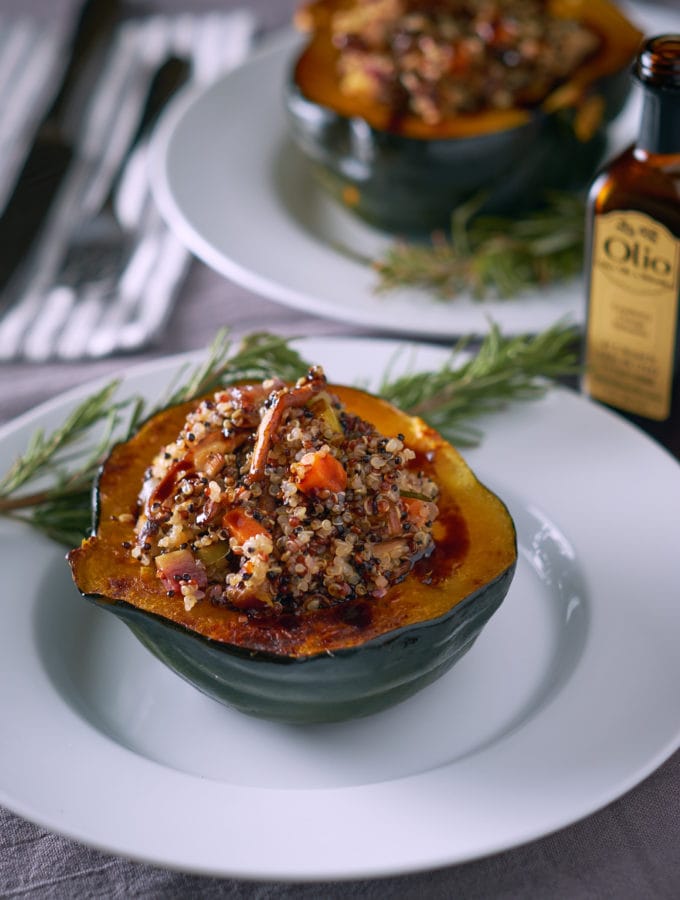 This is your next Lasagna Bolognese recipe for whe

This Apple Galette has all the Apple Pie flavor wi