There’s so much flavor in this little package! I know it’s hot out but these Chorizo Stuffed Poblanos come together in two (and a half) easy cooking steps. Let’s get in and out of the kitchen in a snap. 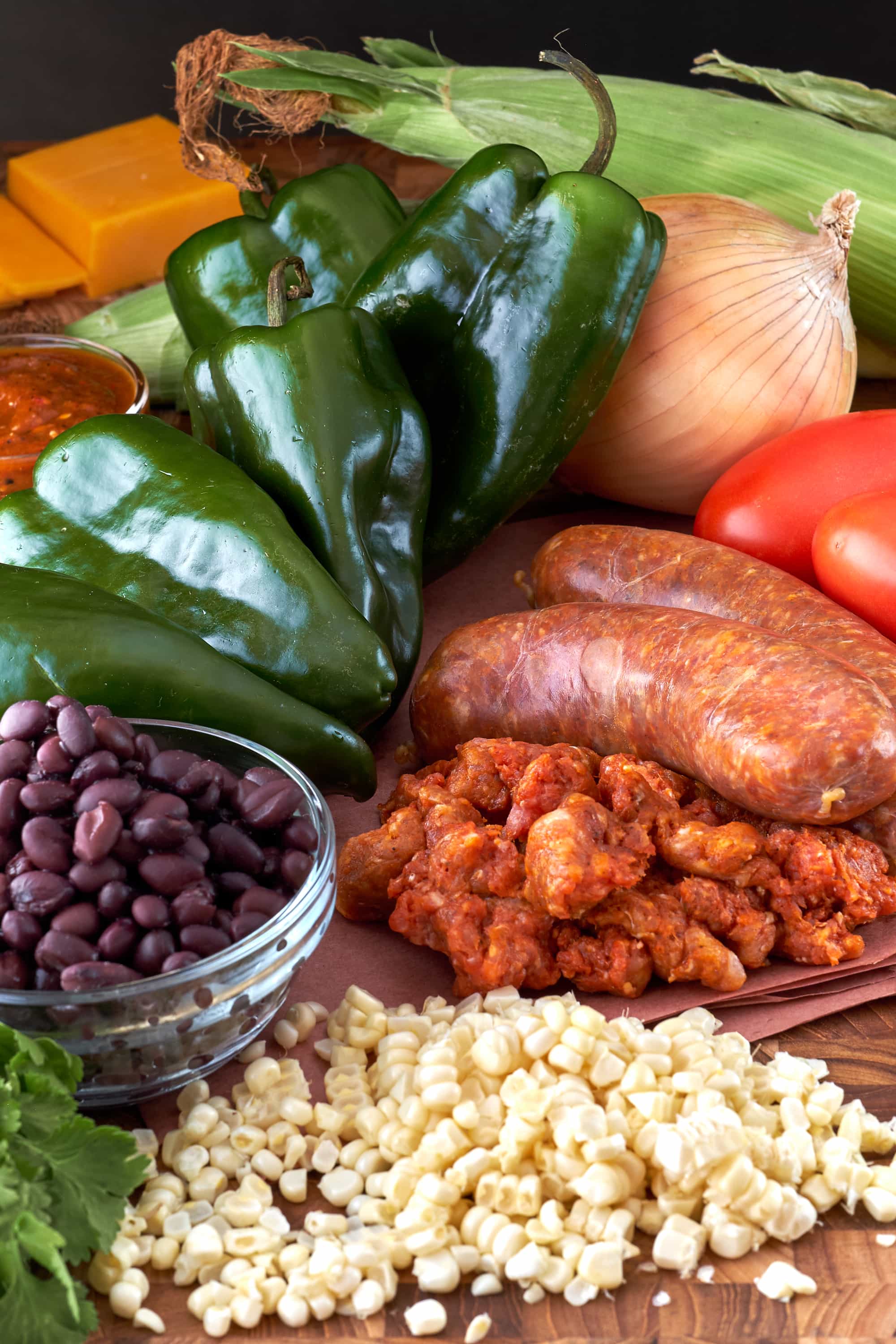 It’s not lost on me that for the week of the Fourth Of July I’m making a lot of Mexican inspired foods and drinks. This might be a topic for another blog post but what really is American Food? All I can tell you is it’s summer time and I’m usually making one of three things; grilled things, cold salads, or Mexican-ish sorts of foods. I guess I feel like food from a hotter place then where I’m from isn’t going to weigh me down as much when the weather is oppressively hot. Maybe it’s because of all those rolls and buns our summer food comes on. And now I’m really in the mood for a char grilled burger with special sauce and thin pickles. I guess I know what I’m making next week.

This is basically a two and a half step process for Chorizo Stuffed Peppers. Make the filling, stuff the pepper, bake the pepper. The stuffing part is sort of a half step as it doesn’t involve cooking. Fair enough, right? The filling takes about 15 minutes and the baking about 30 minutes. Let’s start with the filling.

For my Chorizo Stuffed Pepper filling I’m starting with the corn. You can use any corn you want but summer time calls for fresh corn on the cob. Slice off your kernels and fry in oil over medium low heat. Remove the corn as it starts to take on some color then sweat the onions. Just as the onions start to get tender you can add the chorizo to the pan. I used fresh chorizo sausage links from my butcher and removed the meat from the casing. Break the chorizo in to smaller pieces and add it to the skillet. Incorporate with the onions and stir it around until it starts to take shape. Add a quarter cup of water and break the sausage up as much as possible. Keep stirring and breaking the sausage in to tiny bits. Once you’ve minced the sausage in the pan allow it to cook off and get some color. Add tomatoes, cooked corn, black beans, and cilantro. Cook until tomatoes start to break down then set aside to cool. 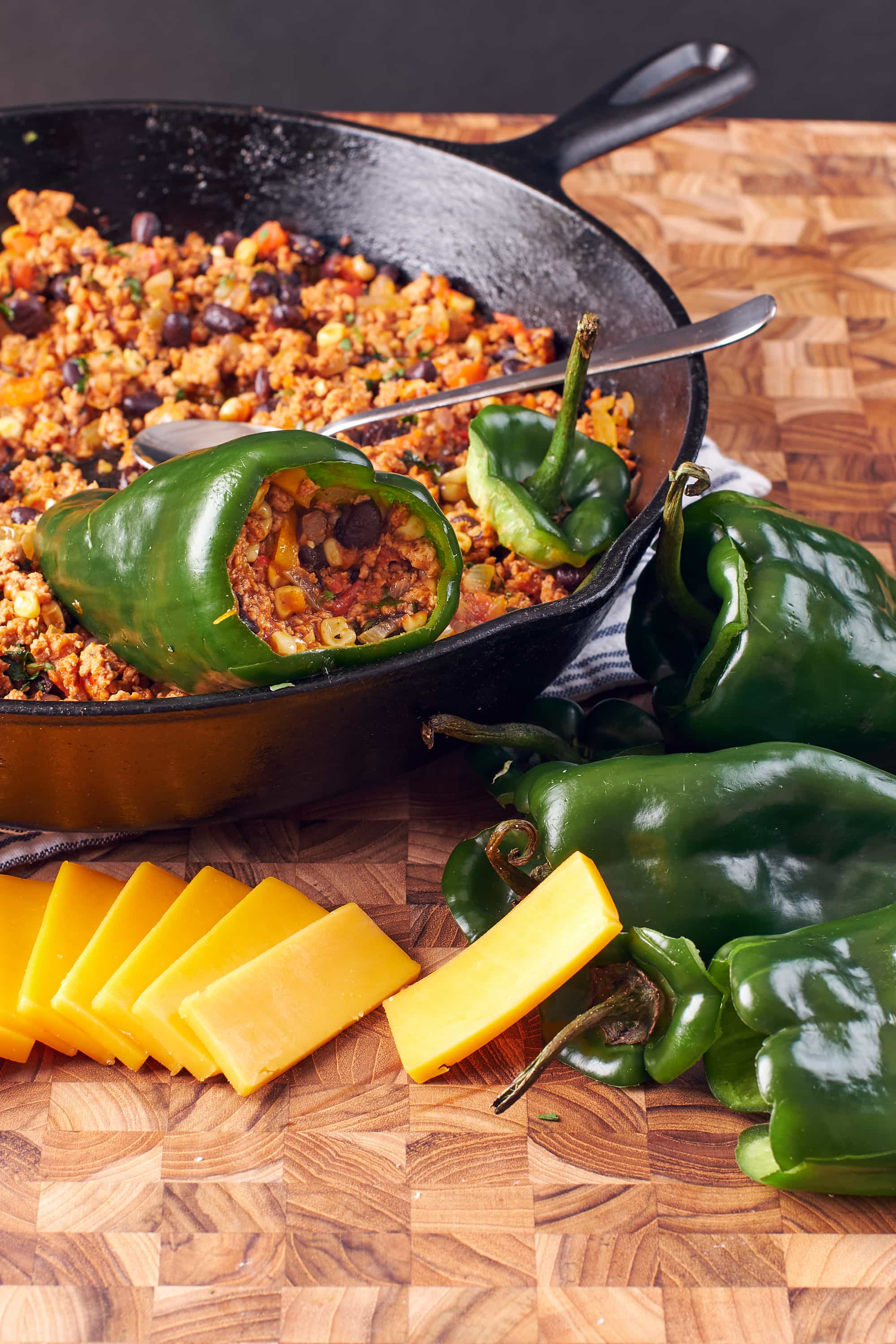 Cut off the sombreros, clean out the insides, then stuff the Poblanos with Chorizo stuffing and Cheddar Cheese.

Allow your stuffing to cool for a few minutes while you prep the poblanos. Wash them thoroughly and cut off the sombreros (caps). Pull out the cap with the stem then reach inside and remove any seeds and white pith. Add a bit of stuffing to the bottom of the poblano then add a 1/4 inch thick slice of cheddar cheese. Continue to fill the pepper with the filling then place the cap on top and set it on a lined baking sheet. Repeat with the remaining peppers and bake at 400°F for 2-30 minutes or until the peppers are tender.

The baking isn’t really much of a step either, is it? This recipe is so darn easy! Once your Chorizo Stuffed Poblanos are out of the oven you can go ahead and plate them. I made a quick cabbage slaw to go with this; shredded cabbage with lime juice, sour cream, cilantro, salt, and radishes. Slice the Poblano Pockets open and top with Salsa Roja and Cojita Cheese. Done. Enjoy with a fresh Margarita! 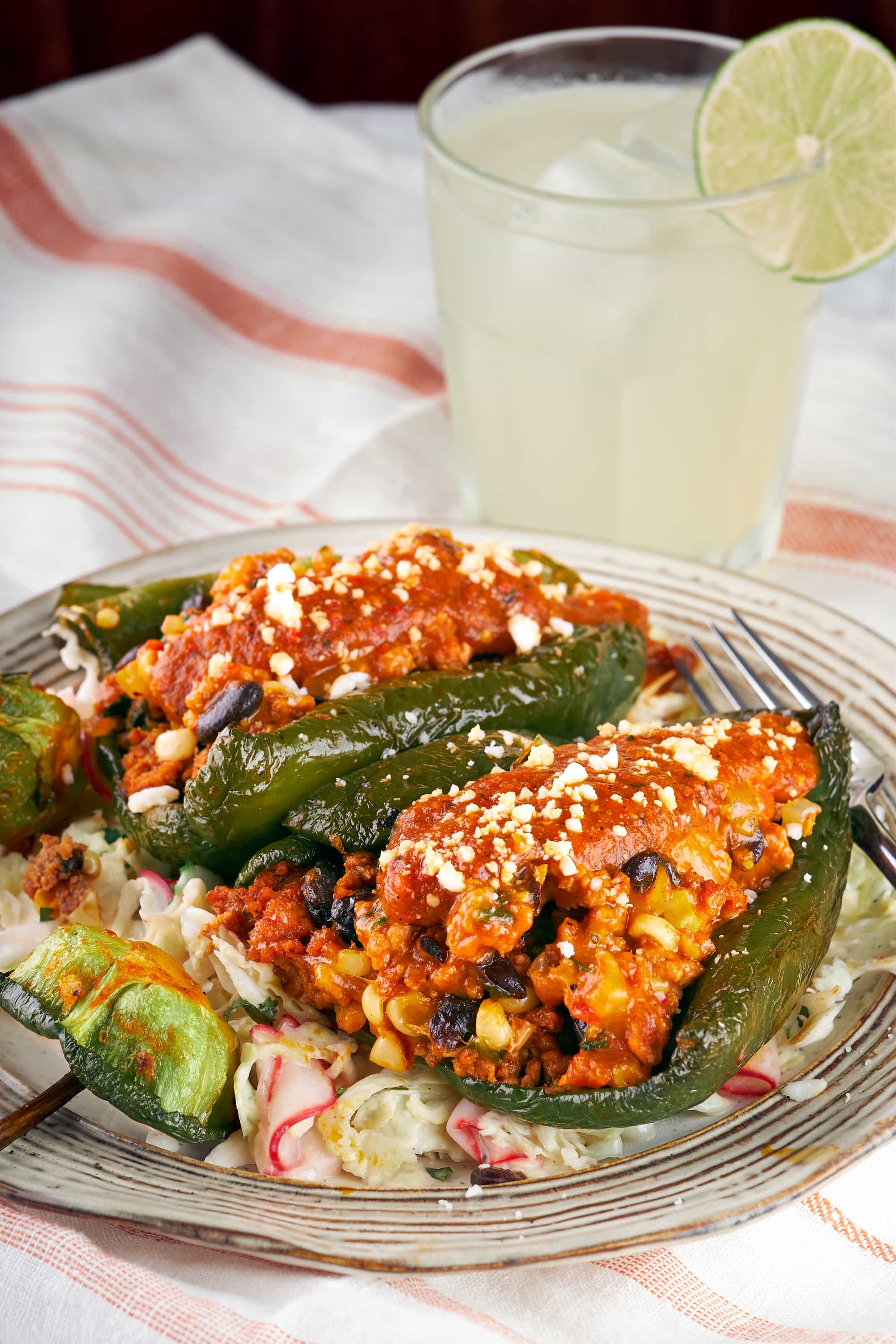 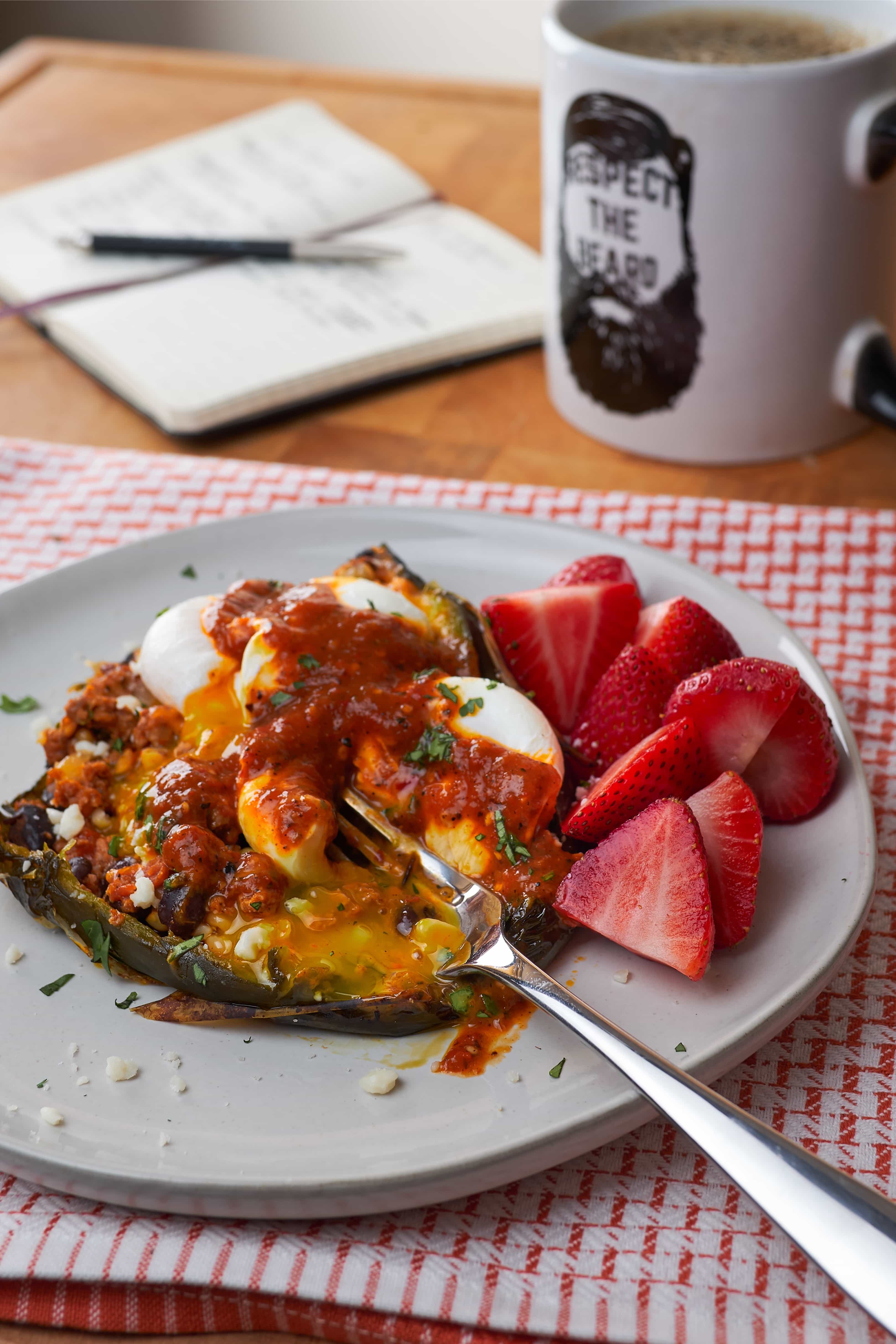 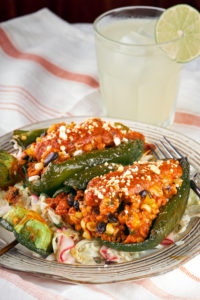 Cuisine: Mexican
Prep Time: 15 mins
Cook Time: 30 mins
Total Time: 45 mins
Servings: 2 Servings
There's so much flavor in this little package! I know it's hot out but these Chorizo Stuffed Poblanos come together in two (and a half) easy cooking steps. Let's get in and out of the kitchen in a snap.
Print Pin 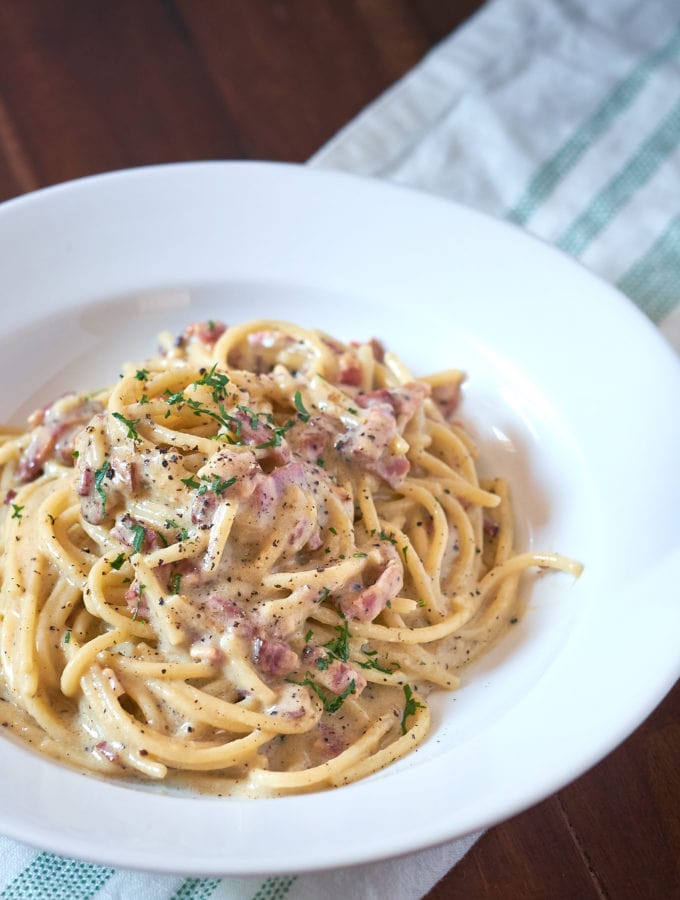 It’s time to level up your pasta game with Spaghetti Carbonara! Don’t let a few simple ingredients fool you. If you’re not careful you’ll end up with scrambled eggs and bacon grease spaghetti. Let’s see how temperature control and timing are key to perfect Spaghetti Carbonara in 20 minutes. Any time you’re making a recipe,…

END_OF_DOCUMENT_TOKEN_TO_BE_REPLACED 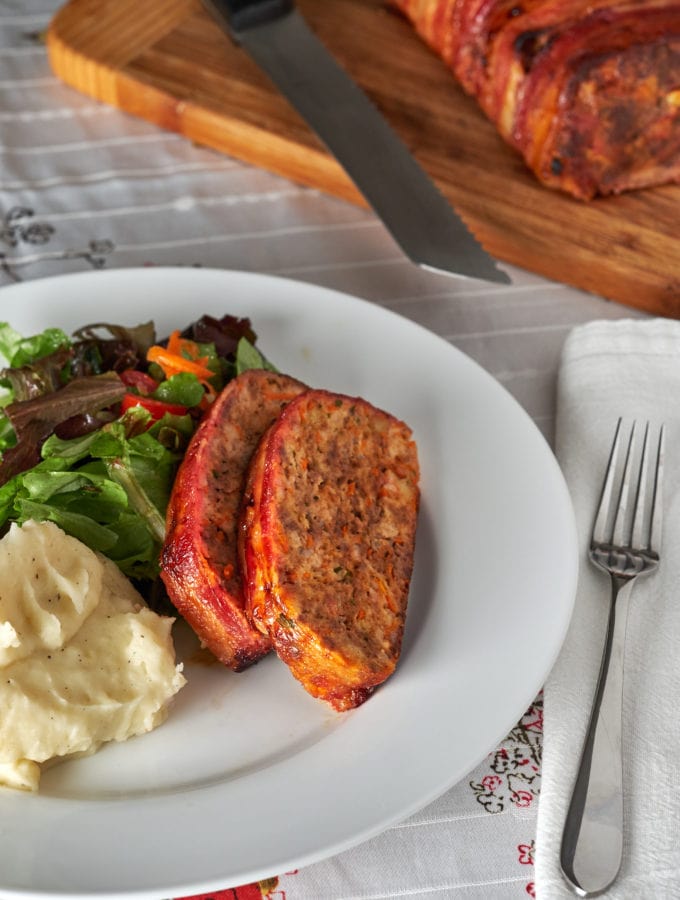 It’s time for BACON WRAPPED MEATLOAF! We’re taking your standard meatloaf up a notch by wrapping the meatloaf in bacon and glazing it with apple cider vinegar and brown sugar. Jump to recipe > Yup. We’re throwing ketchup to the wind and going straight for the good stuff. Make sure to get yourself a nice…

END_OF_DOCUMENT_TOKEN_TO_BE_REPLACED 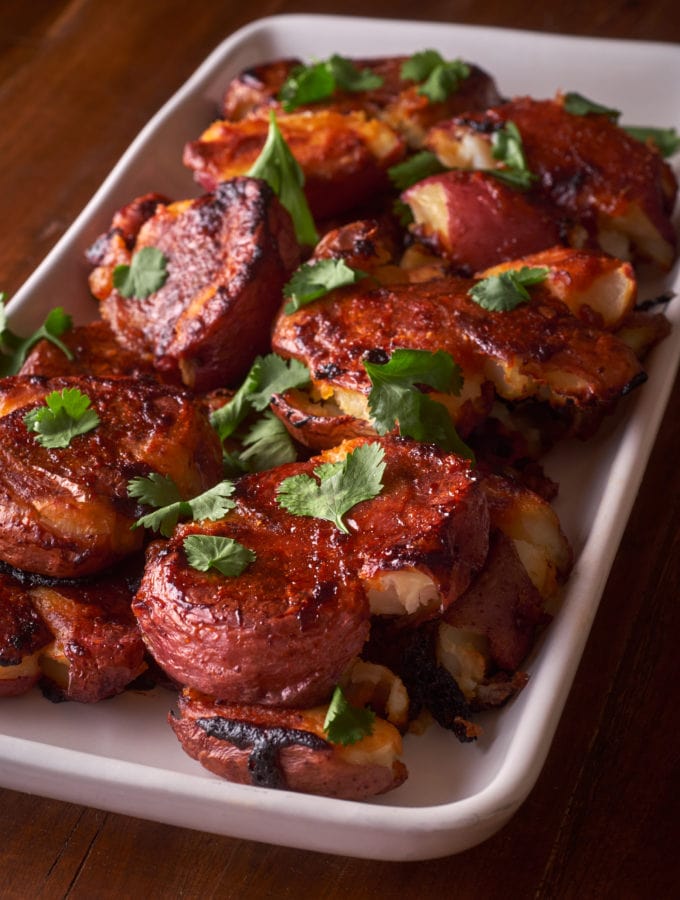 Miso Honey Smashed Potatoes are a great side dish to change things up at the dinner table. Miso, grated Ginger, and Honey combine for a delicious sweet and salty umami bomb. When I’m developing recipes I try to use a name for the dish that best describes just what you’re getting in to. The whole…