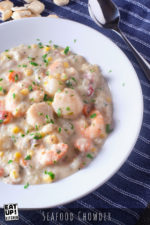 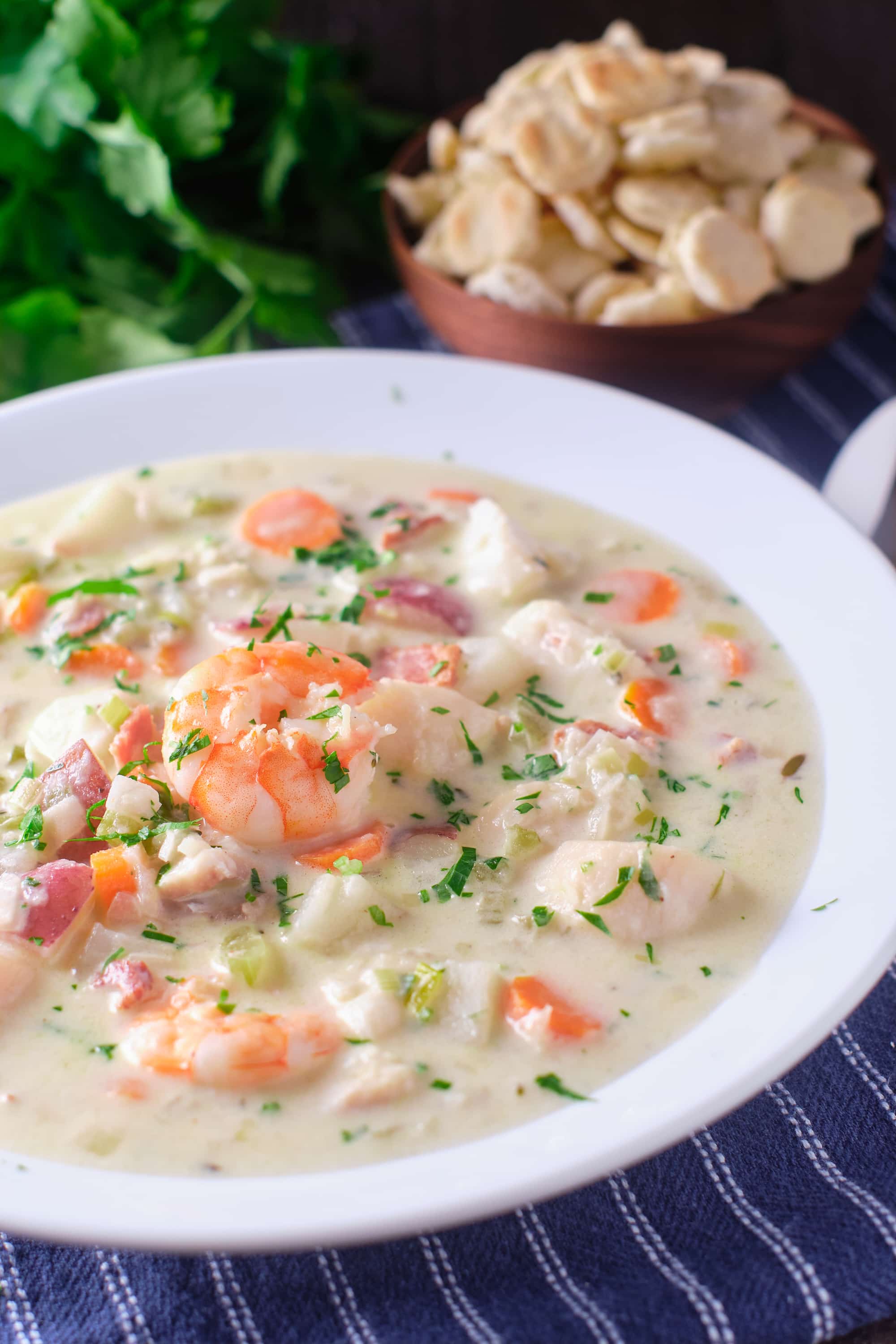 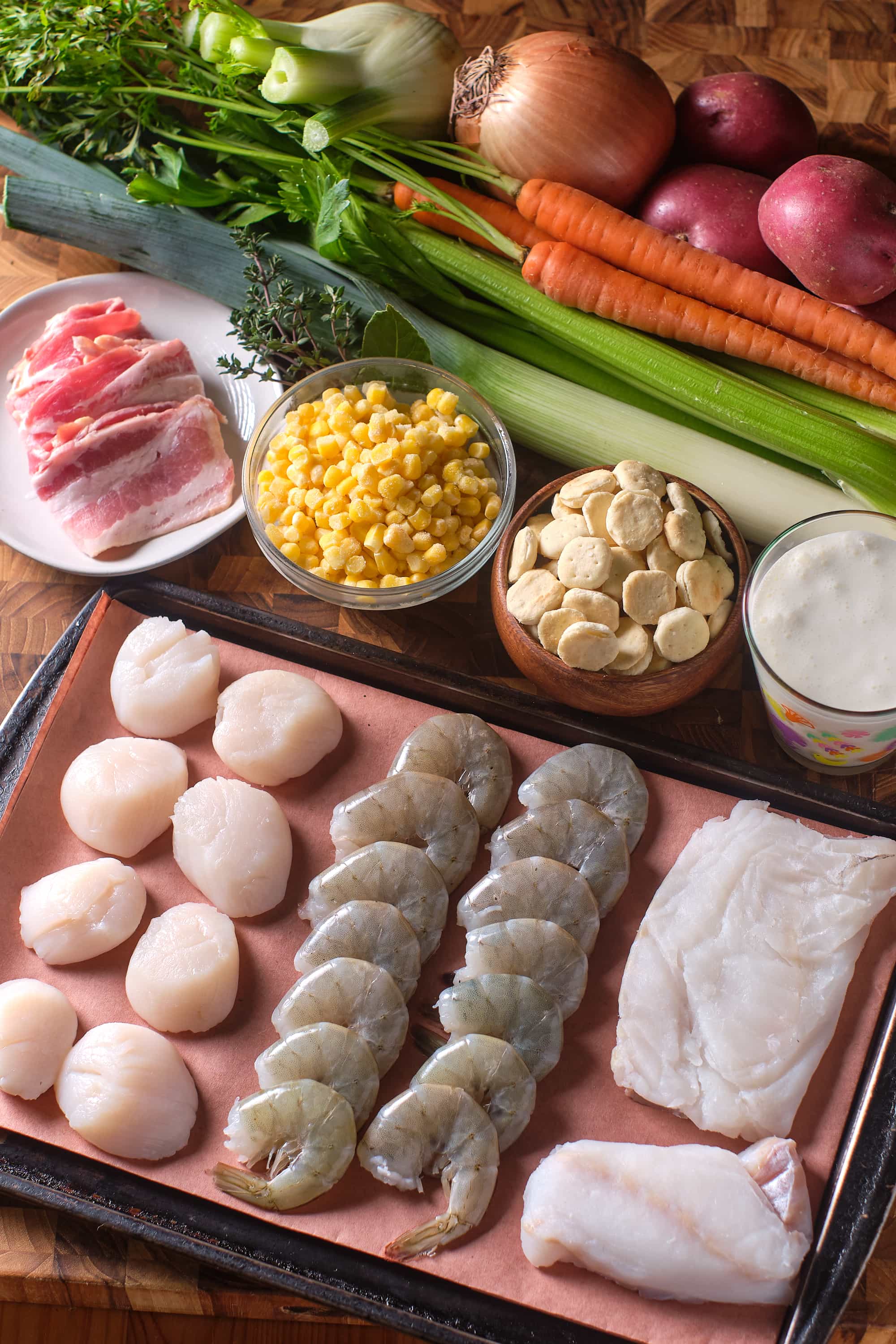 This Seafood Chowder is fairly traditional and super delicious. It’s loaded with shrimp, scallop, and cod and thickened with crackers instead of flour. If you’re looking for prime-cold-weather soup, here’s a great Chowder to keep you warm!

A foundation of flavor.

Great soups are made with one common, under-appreciated ingredient – TIME. You could absolutely make Seafood Chowder in a half hour by throwing everything into a pot and cooking it until it’s hot. The problem with this 30-minute soup, though, is that you’re not really developing the most flavor your vegetables have to offer; especially if your knife skills aren’t all that great.

The ability to control the size of your fresh ingredients will go a long way in developing layers of flavor. A finely diced onion will get tender in a shorter period of time than would a larger diced onion. A one-inch dice of potato is going to hold together in a simmering soup for longer than a half-inch dice of potato. Cooking is less about the recipe than it is controlling time, temp, and mass.

Allowing prepared ingredients to develop maximum flavor over a period of time isn’t something that can easily be written into a recipe. Use your senses. Watch the onions as they sweat. Are the edges browning too quickly? Turn down the heat or even remove the pan from the stove. Listen to your food as it cooks. It should make some sizzling noises but it shouldn’t be screaming. And, most importantly, taste as you go. This includes tasting vegetables before they even go in the pot.

What makes a chowder?

When I think of ‘CHOWDER’ I think of a semi-viscous white broth containing potatoes, bacon, corn, and probably seafood. The history of chowder suggests there really isn’t a strict definition. Originally, chowder was simply a soup cooked in a chowder pot or cauldron. Many chowders are made with dairy and use some sort of flower or cracker for thickening. But then there’s Manhattan and New Jersey clam chowder, among others, which have a tomato broth. So, who the heck knows!?

This seafood chowder starts with a base of finely chopped vegetables softened for 30 minutes with crispy bacon and its rendered fat. You could buy clam juice for this chowder but I prefer to make a super quick shrimp stock from freshly peeled and deveined shrimp. Instead of a roux, this soup is thickened with crackers; either oyster crackers or saltines will work. The broth is finished with a cup of heavy cream for added richness and smoothness. Frozen corn added about five minutes before completion adds a sweet little pop of sweetness that I love. Finally, the seafood. You can use whatever you like here. I’ve used cod, shrimp, and scallops. They don’t need much time to cook at all, less than 4 minutes total for all the fish.

This is a truly fantastic soup for the cold weather coming this winter (although, it’s supposed to be nearly 70° in a couple days!). I’m really happy I tried the old school method of using crackers instead of roux. This gives you the option to thicken the soup a little more later in the cooking process. If you’re looking to become a better home cook, I really recommend focusing on your knife skills and understanding how everything cooks when you add it to the pot. Layer that flavor! 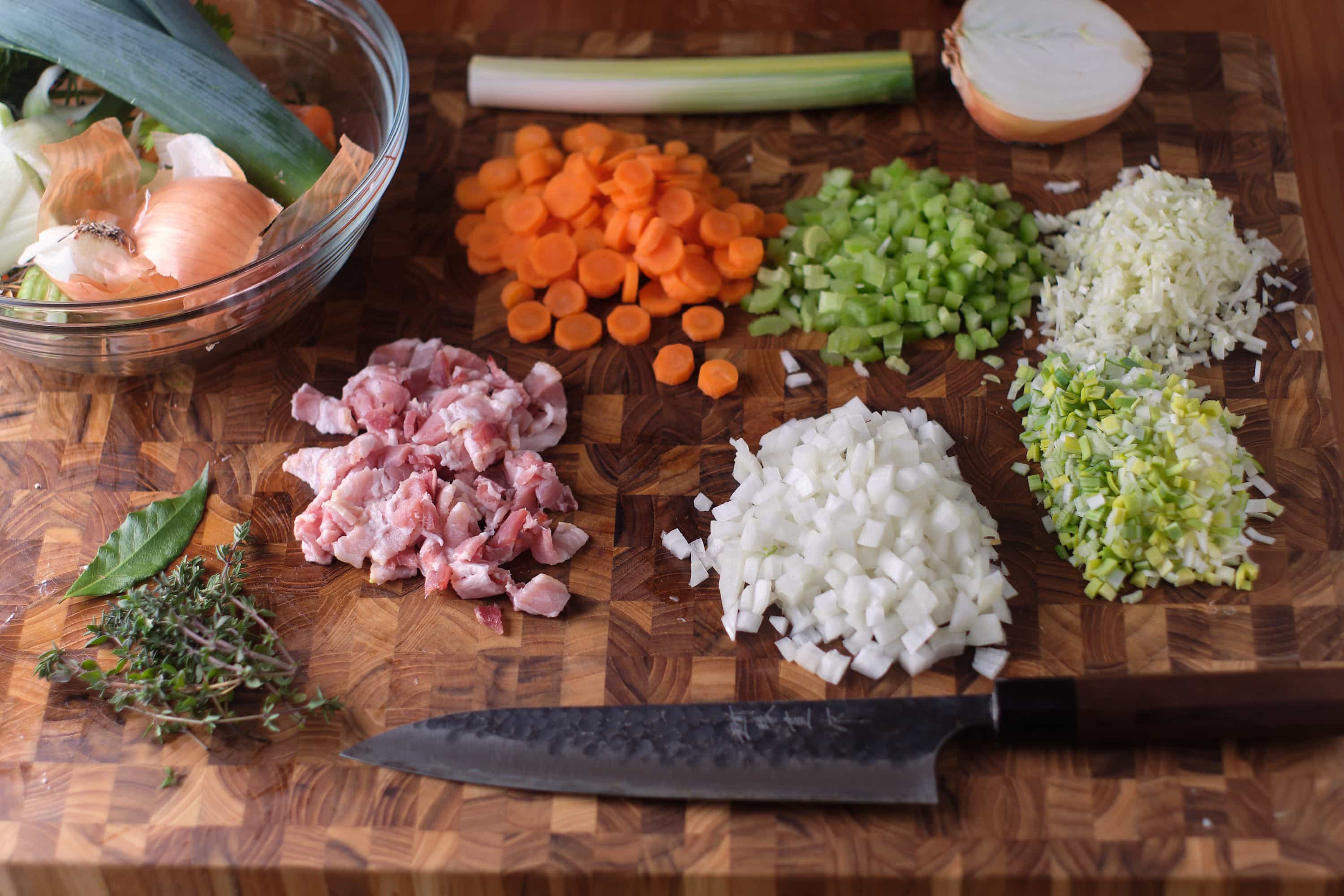 Finely chopped vegetables and a long gentle stew in bacon fat is key to developing tons of flavor for this seafood chowder. 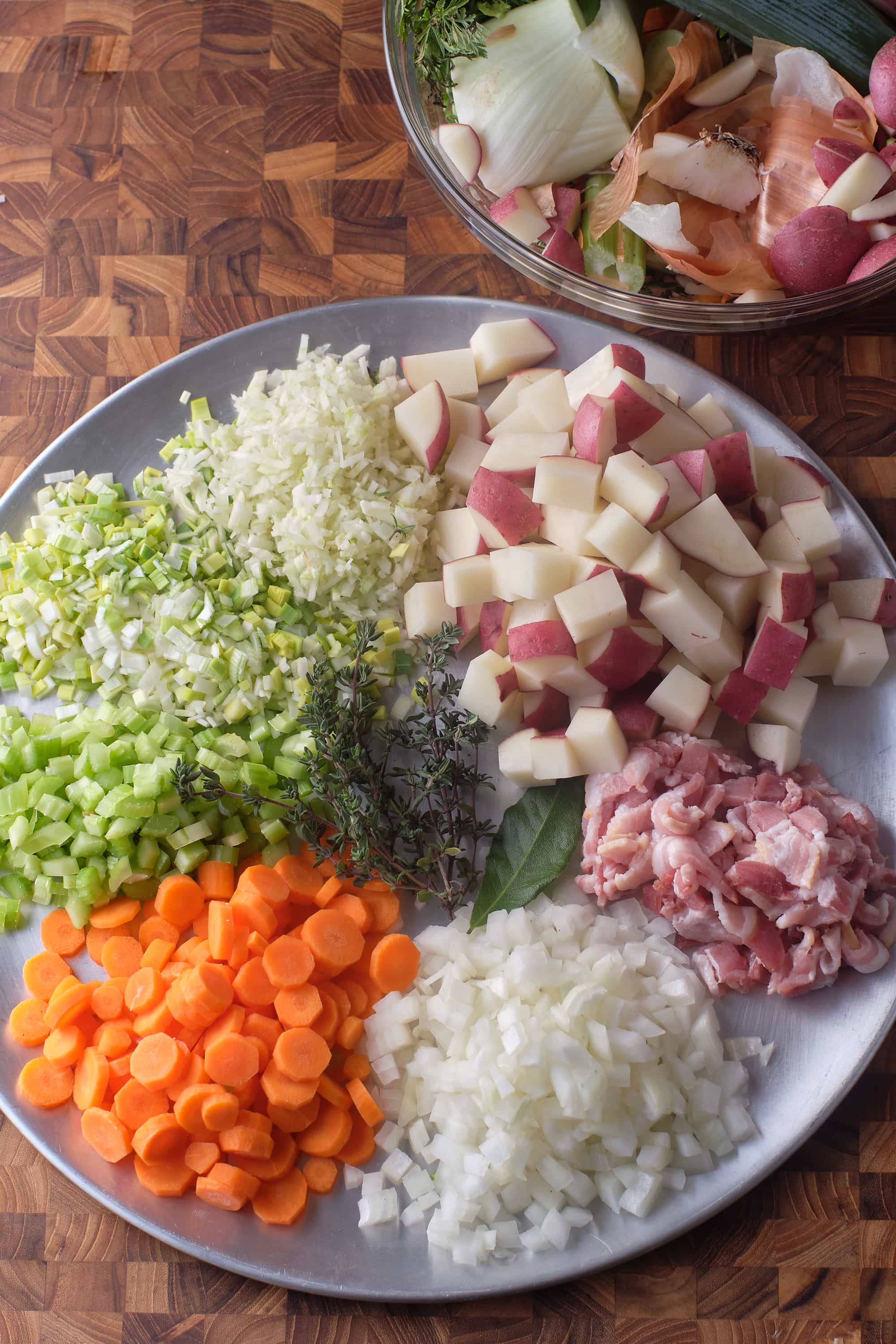 My 2020 goal is to be more organized in the kitchen. This pizza tray is coming in handy!! 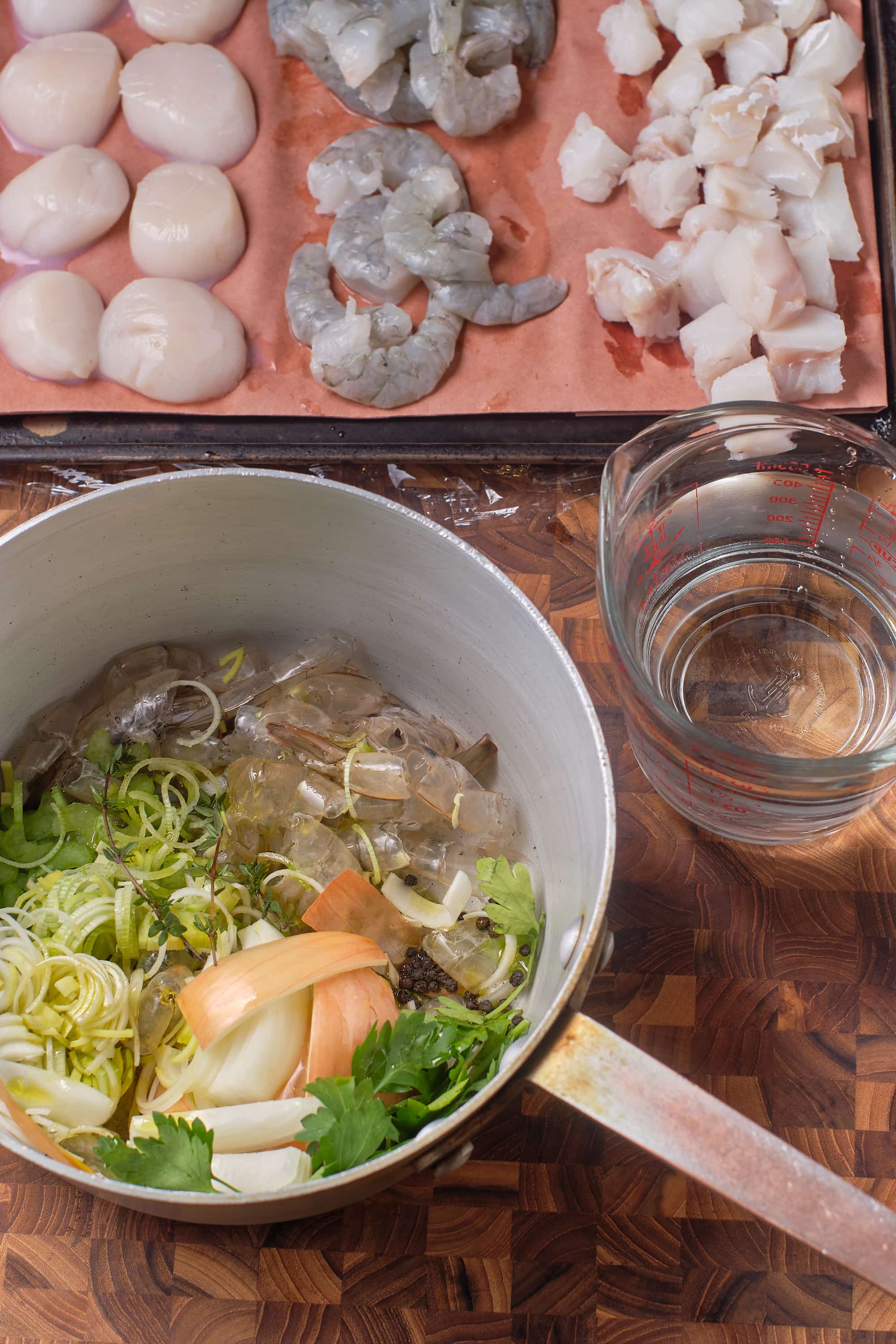 Transfer shrimp peels to a medium pot along with any left over veggies to make the shrimp stock. 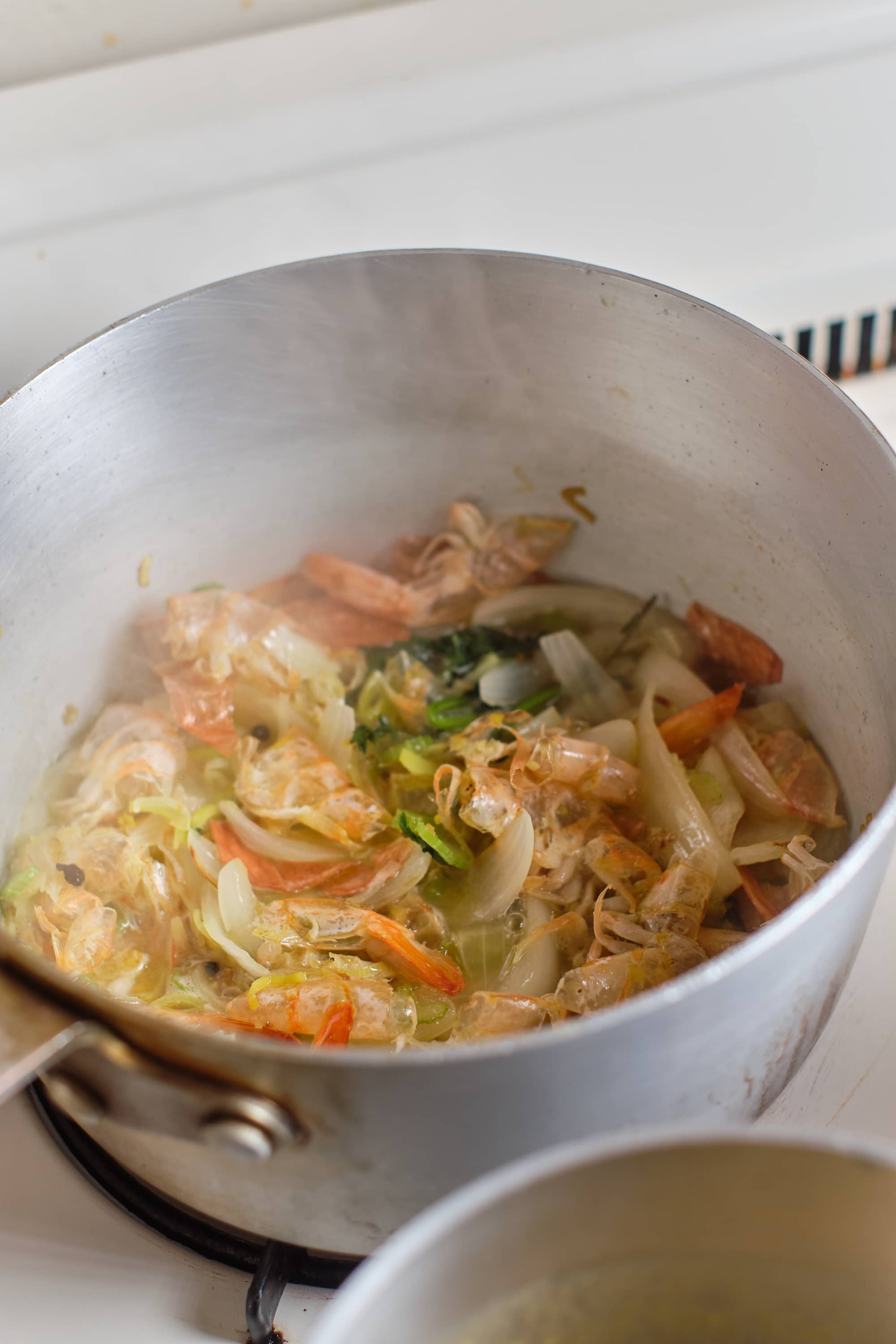 Add a little bit of oil to the pot and cook over medium heat for a few minutes until the shrimp peels start to turn pink. This will develop extra flavor before adding the water. 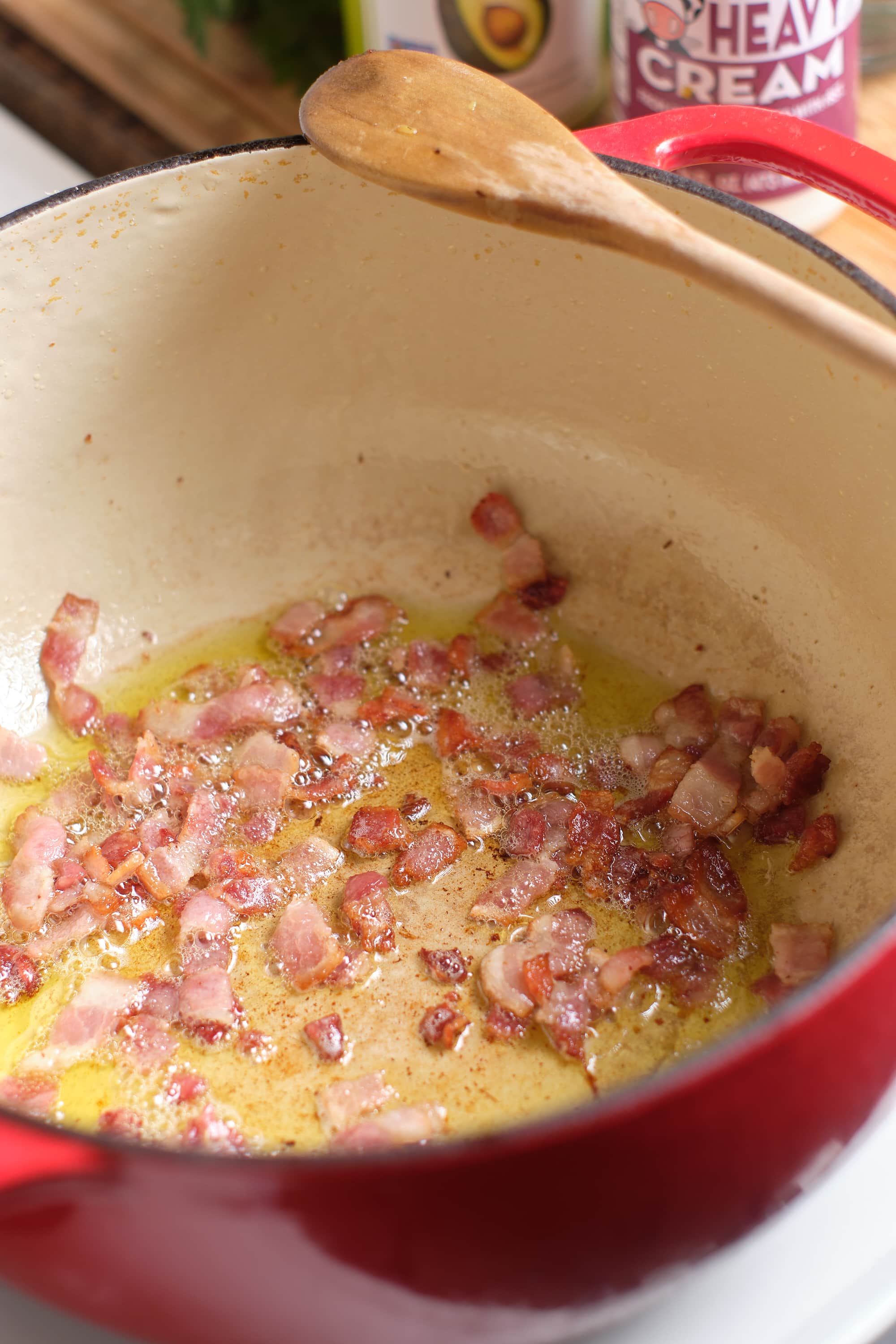 Cook chopped bacon over medium / medium-low heat to get it crispy. 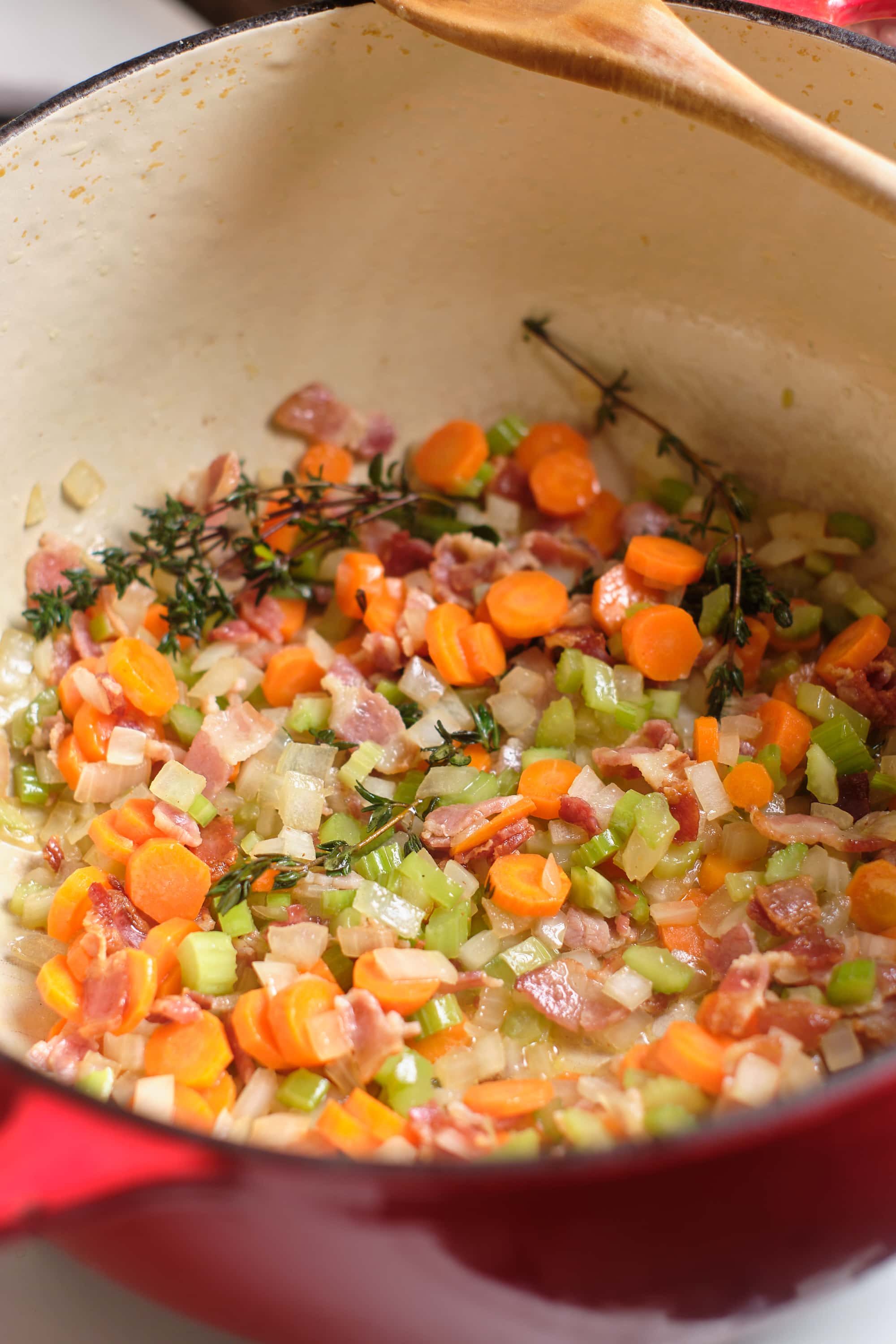 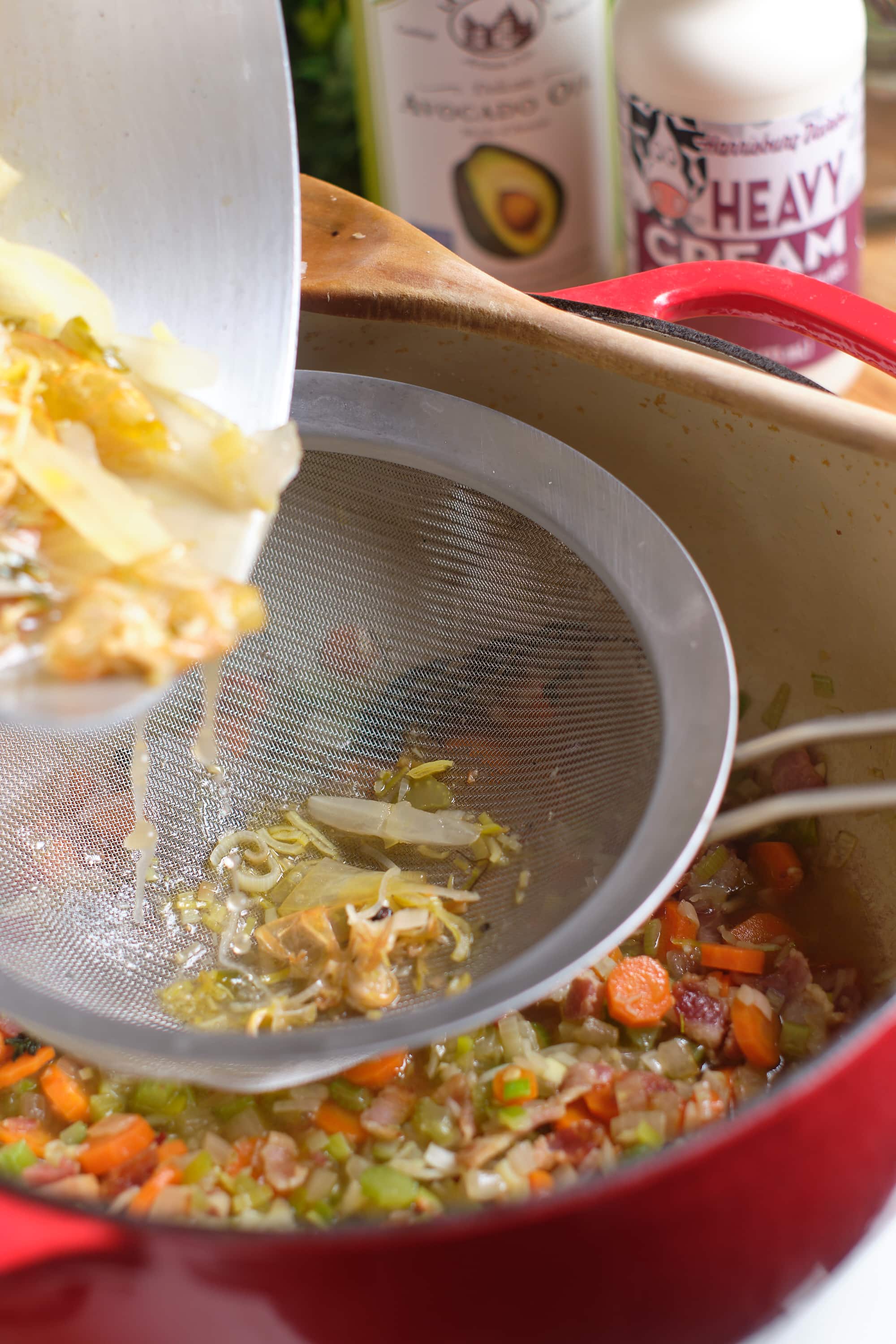 Use a strainer to transfer the shrimp stock to deglaze the pot.

Gentle simmer the shrimp stock and vegetables for 20-25 minutes to develop more flavor. 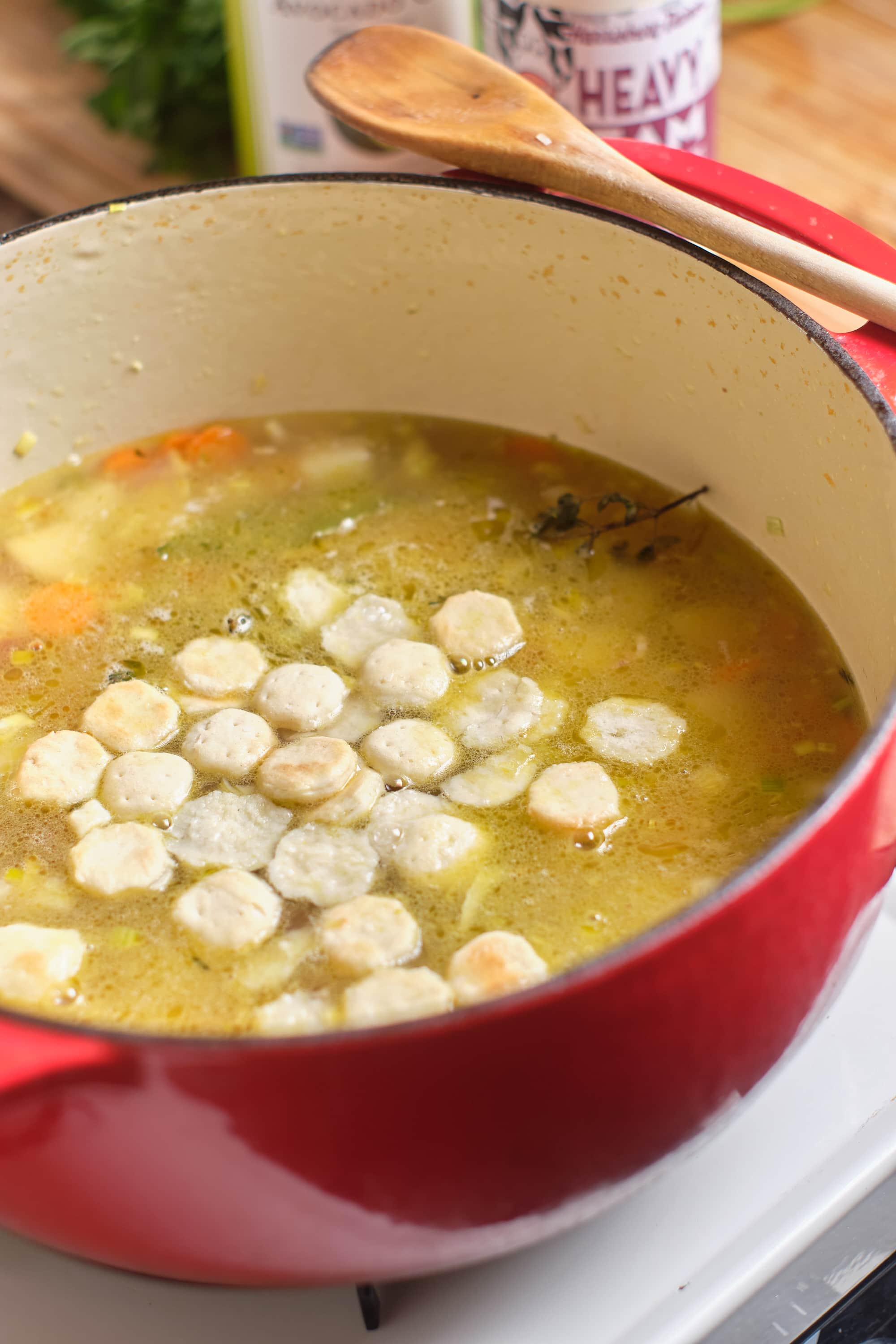 Use oyster crackers or saltines to thicken the chowder. No need for a roux in this recipe. 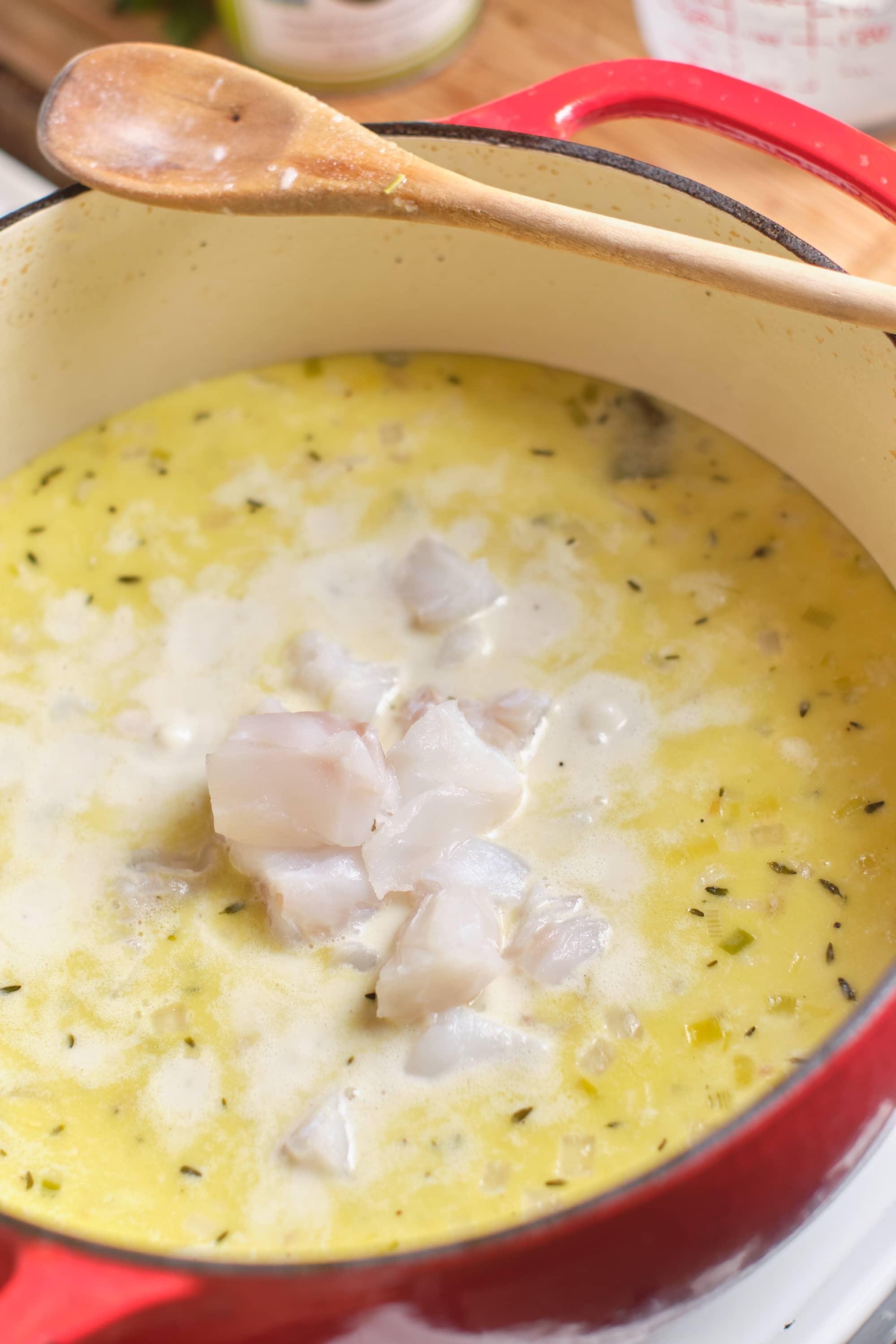 During the last 10 minutes of cooking, add the cream, corn, cod, scallops, and shrimp. (oops – forgot the corn!) 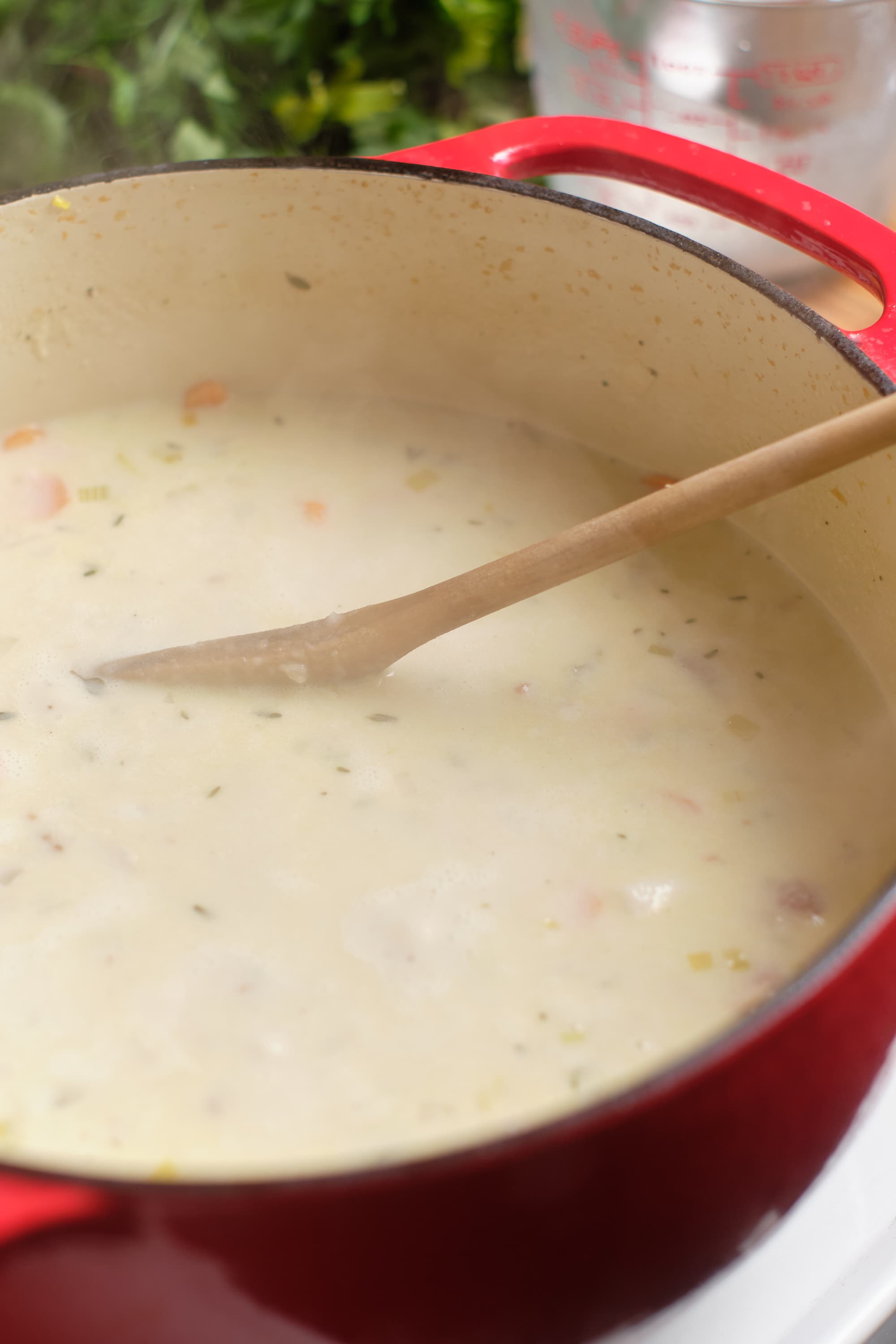 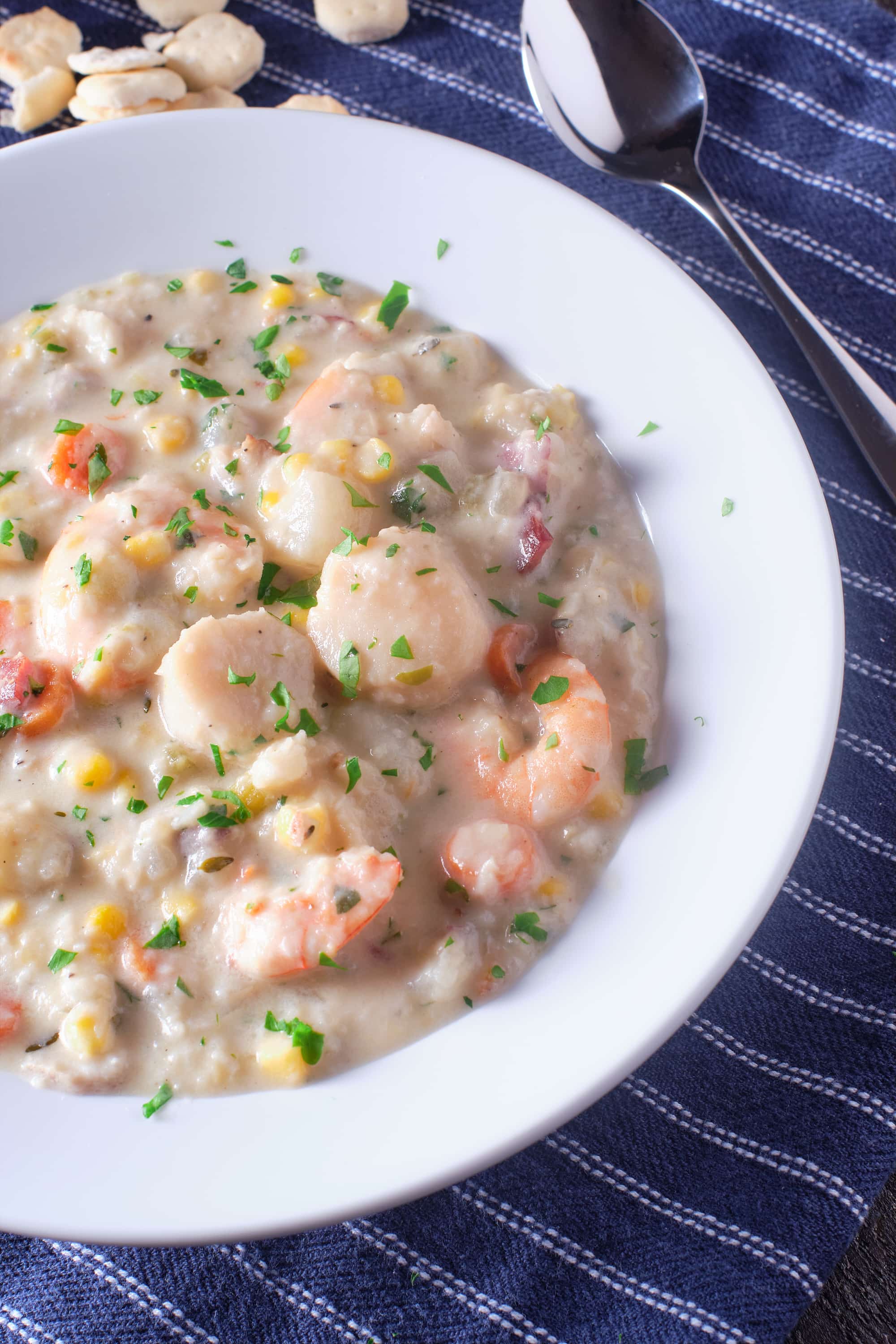 Reshoot because I forgot the corn!

This Seafood Chowder is fairly traditional and super delicious. It’s loaded with shrimp, scallop, and cod and thickened with crackers instead of flour. If you’re looking for prime-cold-weather soup, here’s a great Chowder to keep you warm! 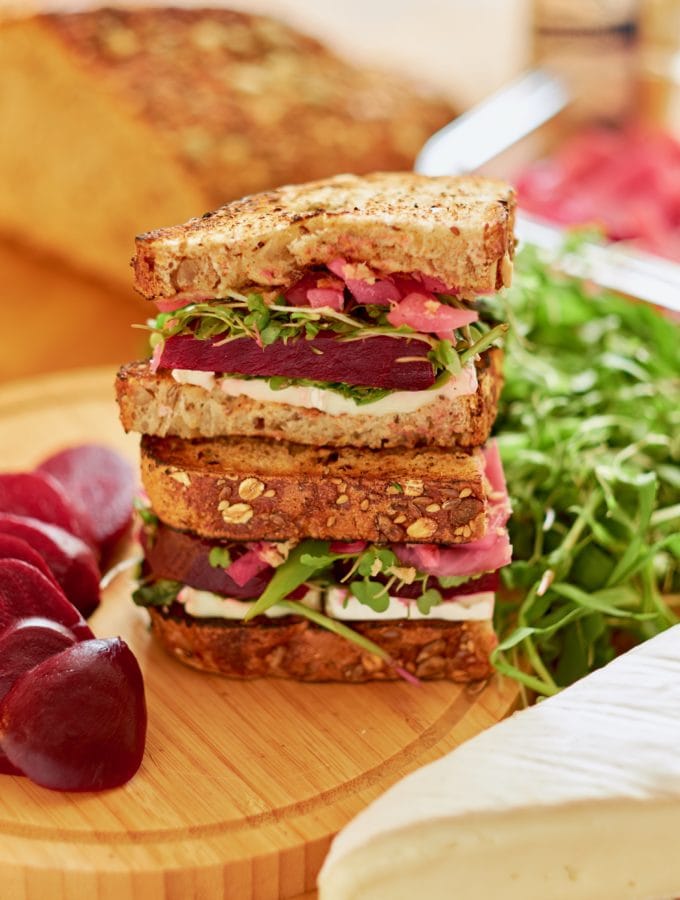 Are you a Beet lover or a Beet hater? Some people say they taste like dirt, I say they taste like delicious earth candy. I like playing with words and I like thinking about interesting ways to prepare common foods. Hopefully someone looking for a Roast Beef Sandwich will come across this Roast Beet Sandwich….

END_OF_DOCUMENT_TOKEN_TO_BE_REPLACED 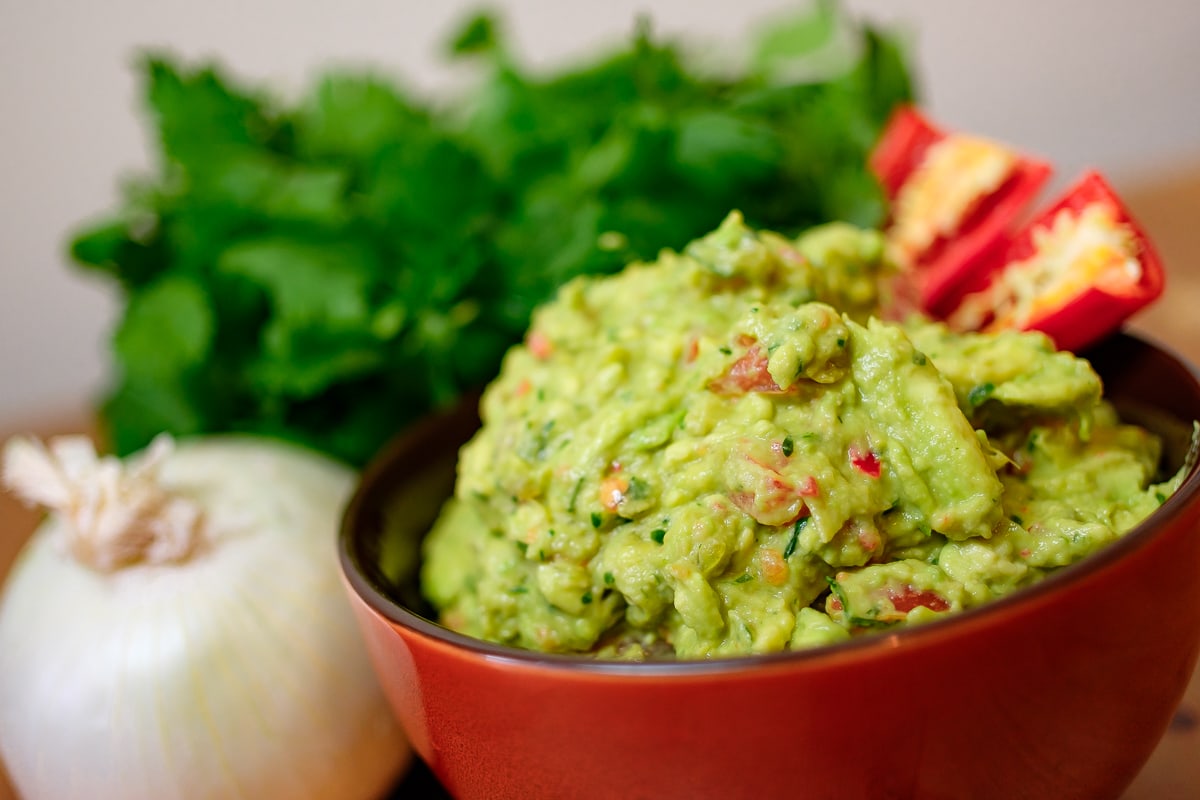 You’ve got guacamole for dips, guac for toppings, guac for kids, guac for adults. Spicy, chunky, garlicy, with or without cilantro, etc. You can make it how mom made it, how the food truck makes it, or how you had it on that one trip to SoCal. Different people like it different ways and I’d…