You just might fall in love with Sweet Potato Gnocchi with Maple Bacon Butter Sauce.

Here at Eat Up! Kitchen, I’m all about exposing how easy it is to cook at home for yourself and others. You don’t have to go out to dinner to have an amazing meal. Cooking at home saves money, time, and allows you to cook healthier (or not – all the cheese!). As they say, you’re the cook! Once you start making pasta and dumplings at home you’ll never even think to order them out for dinner. In most cases you’l find the restaurant is way inferior to what you can make for yourself.

I’m not going to say I never use store bought dried pasta – that’s ridiculous. Pasta comes in all shapes and sizes so sometimes I’ll buy some or sometimes I’ll make it at home. Search Eat Up! Kitchen for pasta recipes here. Gnocchi and dumplings are too easy not to make at home though. Here’s how you make gnocchi: combine flour and potato, cut in to bite size pieces, boil until done. Ugh, I practically worked up a sweat just typing that!

Alright, it may be slightly more complex, but not much. Most recipes for sweet potato gnocchi I found started with boiling the potatoes. Even some old school Italian grandmother recipes suggest boiling. I find this results in a potato that’s too wet and requires a higher flour to potato ratio. You can take the time to squeeze out the extra water (and flavor) with a tea towel… or just roast them. Roasting your sweet potatoes will result in a sweeter spud and allow for a more equal ratio of flour. In this case I have two pounds of sweet potatoes and two cups of flour.

Once you’ve roasted your sweet potatoes (400°F for 45+ minutes) and allowed them to cool, use a potato ricer to mash them up. Rather than smashing them with a fork, the ricer will sort of aerate them resulting in a lighter gnocchi. Add a teaspoon of salt and a pinch of nutmeg then gently fold in a quarter of the flour at a time until a manageable dough forms. You really want to use as little flour as possible – two cups worked for me. Don’t over work the dough as it will suck up too much moisture from the potato and make it gummy. Divide the dough in to manageable sizes and roll it out in to long logs. Divide in to one inch pieces and dust with flour to prevent sticking. Roll the gnocchi on the tines of a dinner fork to form ridges for the sauce to stick.

Right before you start ricing your sweet potatoes, put a big pot of salted water on the stove to bring to a boil. That way it’ll be ready for you just as you finish rolling your gnocchi. I like to keep things crazy in the kitchen so I’m usually rolling a fresh batch of gnocchi as another is boiling. It takes about 3 minutes to cook so as I transfer one batch from the boiling water to towel to dry off I can add another batch to start cooking. You might want to finish one step before you start the other step. But then you’re just standing around waiting for the gnocchi to boil – booooor-ing.

Once your gnocchi has cooked in the boiling water and drained on a towel you can start the sauce. Any sauce will do but tomato sauce and sweet potato gnocchi seems a little weird to me. I fried up four strips of Maple Bacon for some sweet smokey flavor and for a crunchy topping. Reserve the bacon fat and clean out the pan. Then add 1 tablespoon of unsalted butter and 1 tablespoon of the bacon fat back in the to pan. Heat this over medium high heat and fry small batches of the gnocchi. Just let them sit for a minute on each side to crisp up.

Here’s a quick video of rollin gnocchi. Sorry, I have to work on my instructional video production.

Sweet Potato Gnocchi fried in Maple Bacon fat and Butter is something worthy of your personal love and affection. The fried exterior is hard and crispy while the interior is soft and pillowy. The sweetness of the sweet potato with maple bacon… I think I’ve said enough. 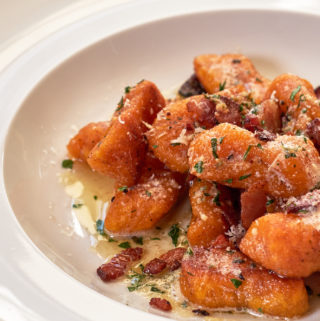 Note that I did not add any extra maple syrup to this recipe. This particular bacon had enough maple flavor for me that I wasn't going to add any. You could stir in a couple teaspoons of maple syrup to the pan sauce just before serving.

bacon pasta potatoes
This post may contain affiliate links. I may get a tiny kickback from your purchase.