I’m sure most of you have had a cheesesteak and may even have a strong opinion as you who makes the best. In this post we’ll be looking at the “Best of Philly” Cheesesteaks and I’m going to tell you how you can make one 100x better at home.

There’s no shortage of webpages devoted to the Best Philly Cheesesteak year after year. I won’t clog my page with all that nonsense. I will however direct you to the Serious Eats 2014 review of four of the best Cheesesteak joints in Philly. Of all the articles I’ve read by local and national contributors, Ed and Niki have concisely described what makes a Philly cheesesteak and why these joints are the best at making a sandwich you can make even better at home. They’ve hit the nail on the head right here,

“While the texture and beefiness of our steaks were markedly different from vendor to vendor, not one sandwich contained beef that, on its own, we’d call ‘delicious.’ Even cooked fresh to-order, the meat was consistently unseasoned, bland, and often dry. Which is why Cheeze Whiz turned out to be our saving grace.”
– Serious Eats “The Best Cheesesteaks in Philadelphia” Niki Achitoff-Gray and Ed Levine

So, when people ask me what where to get the best Philly Cheesesteak in Philadelphia, I tell them “in your kitchen”. I know that’s not what they want to hear, they just want a local’s opinion so they can go home and say “the locals say this is the best so it must be the best”. Sorry folks. I’m not going to be responsible for your disappointment. I have yet to have a cheesesteak in the home of the cheesesteak that has excited me. Roast pork sandwiches on the other hand… whoa mama!

It’s true. The vast majority of cheesesteaks are dry, overcooked, and not very steak-y. A steak that’s been shaved or sliced may seem to be the best at delivering more beefiness per bite but they’re never properly cooked. Chopped steak sandwiches have more surface area so you get some delicious crispy browning but they sacrifice juicy steak flavor. In order to sell thousands of cheesesteaks a day, a restaurant has to prepare the steak a certain way. This often means very little seasoning and cooking pounds of inexpensive, lean steak on a large grilled at one time. Preparing a cheesesteak in a cheesesteak joint practically requires you make it poorly. I mean, you’re taking for granted that you’re eating a cheesesteak sandwich while forgetting you’re eating a steak. Steak should takes like steak! It’s the second best meat next to bacon.

I’ll admit that there’s something to be said for the absolutely perfect blend of all these ingredients. It’s a culinary marvel that you can take steak, onions, cheese, and bread and create something that tastes all on it’s own unlike anything else. Moreover, the fact that dozens of restaurants in a few square miles can all make it differently and each claim to be the best. That right there is the DNA of Philadelphia. Well, that and the image of Mike Schmitt, Will Smith and David Lynch dressed up as Ben Franklin in the New Year’s Day Mummers parade.

To make the Ultimate Cheesesteak Sandwich at home, we’re going to buy some well marbled Ribeye steak and thinly slice it by hand. If you drop the steak in the freezer for an hour, you’re going to be able to use a sharp knife to easily slice the steak as thinly as you’d like. Don’t go too thin though! When we cook this in a pan with a little bit of neutral oil, we’re going to brown one side then remove it from the heat before it cooks all the way through. This gives us that delicious browning like a chopped steak before it gets overcooked and dry. Another thing we’re going to do is leave most of the fat on the gorgeous ribeye steak. As we know, fat is flavor. It’s also moisture and this is something I’ve found missing from 99.99% of all the steak sandwiches I’ve ever head. At this point, you have some steak that’s cooked better than most cheesesteaks are cooked in the entire City of Cheesesteaks. We have a few more ingredients to take a look at.

Onions in cheesesteaks have been found to be sliced thin or thick, or diced small or large. I’m in the camp of the large dice. Yes, it’s a “cheesesteak” sandwich but the reality is that the onions are 25% of the ingredients so they shouldn’t be an afterthought. I like a yellow onion or a vidalia like I’ve used in this recipe. I give it a large, corse chop and cook it over high heat in a neutral oil like safflower for a few minutes. Don’t over cook them. The onions are done just as the edges start to turn brown and before the centers are translucent – think about the onions in pork fried rice. They should retain their onioniness; something else missing from every cheesesteak I’ve ever had. Pro-tip: cook the onions first, set aside then cook steak in same pan so the steak absorbs the onion flavor.

The most contentious element of the Philly Cheesesteak is the cheese.  My personal opinion is that any cheesesteak worth ordering is one worth ordering with wiz. Or, it just may be that the only time I order a cheesesteak is when I’m drunk or hungover. Your made-at-home Ultimate Cheesesteak is going to be made with any meltable creamy cheese you want to use. The cheese has two jobs to do here. Coat and combine the onions and steak in to one element and to add a little bit of mild funky flavor to the sandwich. Wiz does this perfectly but it’s often too salty and makes your sandwich appear radioactive. American cheese is pretty good as well but, again, too salty and technically not a cheese (not that Wiz is). For me, domestic provolone is too boring and imported provolone is too pungent – leave that for the roast pork. I purchased Emmi Raclette from Whole Foods which is known for being a mild meltable cheese for spreads, fondues, and now cheesesteaks. This is the stuff they heat under a fire then shave on top a baguette. As I discussed in my Mac and Cheese recipe, the best way to melt cheese is with a little bit of sodium citrate. This will prevent the solids and liquids from separating as you heat the cheese in a pan over low heat. It’s not mandatory but it is helpful if you have some around. Add a bit of water and oil to a pan along with a teaspoon of sodium citrate. Allow it to dissolve then slowly whisk in slices of cheese to melt.

Most Philly Cheesesteaks in Philadelphia will be served on an Amoroso’s Roll. There’s no contention about this but if you’re not in the region you may have a hard time replicating them. I’ve seen far too many cheesesteaks around the world using what could barely pass as a roll let alone a cheesesteak roll. The flavor and texture of Amoroso’s “Philly Roll” is somewhere between a hoagie (sub) roll and a baguette. It has to have a certain chew to it. It should be darker on the outside which provides a very distinct well done bready flavor. It should not be toasted but should be warmed. It should not be light and fluffy or cloud like. Although, that would be the kind I’d prefer for the chopped steak sandwich if I were ordering one. I got lucky and picked up a half dozen bargain bin rolls from my local bodega for $2.50. To be honest, this was the hardest part of this recipe. I live in this city but it’s surprisingly difficult to find certain things if you don’t live in the right neighborhood. I’m still wishing for a hardware store!

You’ll find that some cheesesteak joints have a certain method of assembly. The Guardians of The Philly Cheesesteak will tell you that one joint is better than another strictly due to how they assemble their sandwich. Cheese first or cheese on top? Onions mixed with steak or layered on top?  I’m of the opinion that the only proper method is mixing the steak, onions and cheese together to create a cohesive blend to be added to the bun. I’m going to recommend two methods for this. In the pan or in a bowl. The in-pan blend is great because the cheese melts into each nook and cranny of the steak and onions and epoxies itself to them. The in-bowl method is a little easier to mix with a utensil and tends to be easier to clean up. If there’s are any left overs, you can just over the bowl and stick it in the fridge.

To summarize; buy good ribeye, freeze and slice thin, fat is flavor, don’t over cook the onions, melt your favorite cheese, combine into a flavorful chewy roll. Hot peppers are the only allowable peppers and they should be served on the side. We will NOT be mentioning the K word. 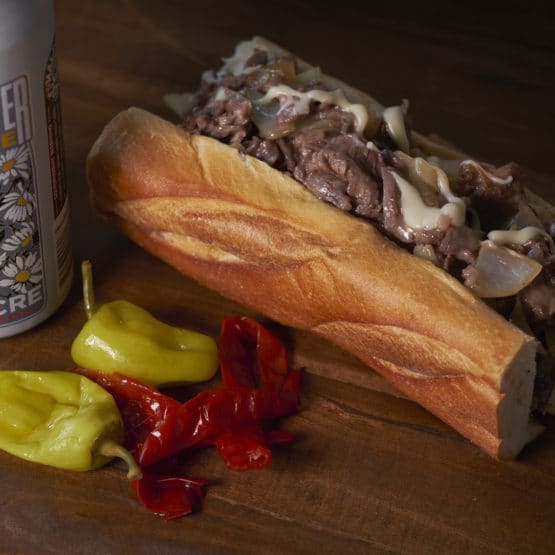 Anthony
This better-than-Philly Ultimate Cheesesteak Sandwich is loaded with what Philly lacks - Flavor. Hand cut the best ribeye you can buy and leave the fat for maximum flavor and moisture. Emmi Raclette Cheese, known for hot scrapped cheese baguettes, is the perfect cheese for your homemade cheesesteak.
5 from 1 vote
Print Recipe Pin Recipe
Cuisine Philadelphia

Depending on how hungry you are, one pound of ribeye would probably feed two people.

cheesesteak Philly cheesesteak
This post may contain affiliate links. I may get a tiny kickback from your purchase.