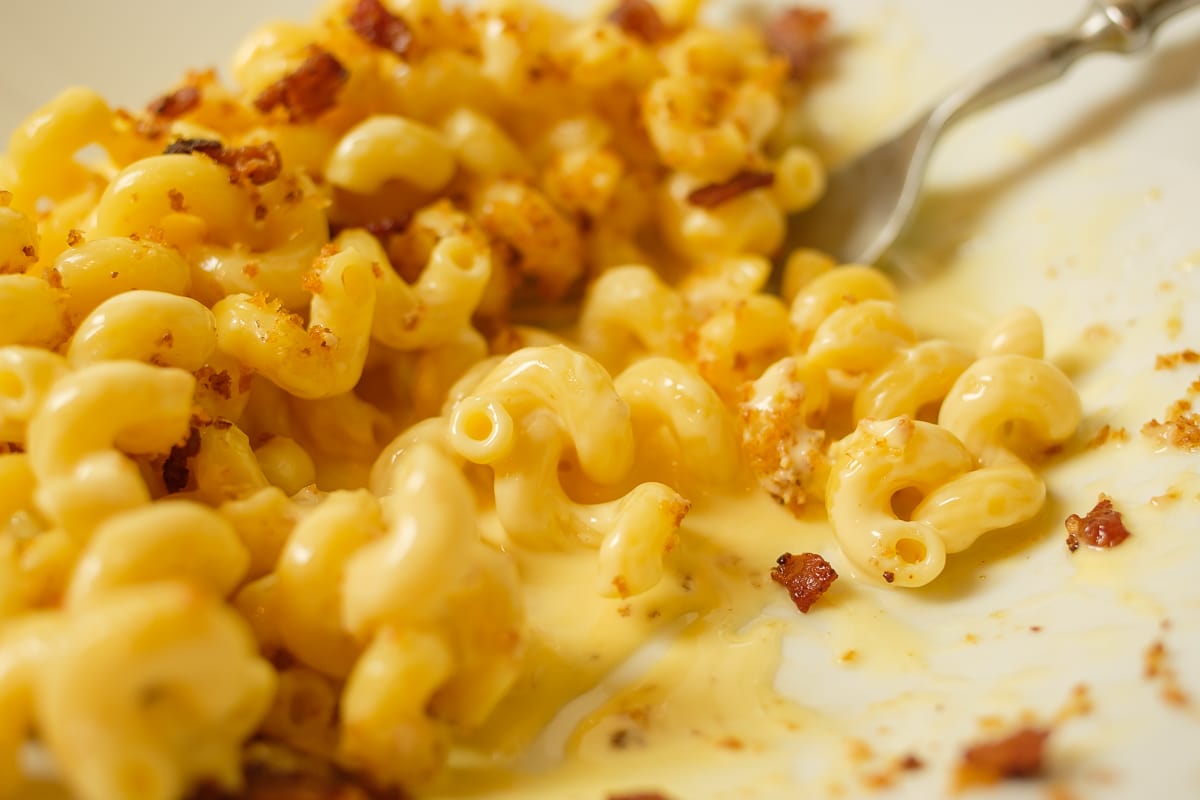 What’s the secret to the richest, creamiest, silky smoothest Mac & Cheese? I’ve tried The Food Lab’s Ultra-Gooey Stovetop Mac and Cheese Recipe by Kenji López-Alt and it’s quite good. But, there’s kind of a lot of steps and ingredients and I’ve heard of this secret ingredient which is supposed to be even better.

Most Mac & Cheese recipes call for butter and flour to make a roux. This acts as a thickener and sort of pseudo emulsifier. Why do we need an emulsifier? Simply, when cheese melts, the water and fat separates. If you’ve ever made your own vinaigrette at home, you know the oil and vinegar need a little bit of mustard (I like tahini!) to bring the two liquids together. Using a roux to emulsify melted cheese only lasts for a little while. Eventually, the cheese becomes this clotted, glunky, there’s-obviously-flour-in-this mess. Kenji uses evaporated milk and eggs to emulsify and thicken his cheese sauce. It totally tastes like Velveeta so I’m not saying it’s a bad method.

The cheese sauce for this Mac and Cheese has only 3 ingredients. One is obviously whichever cheese you choose. The second is milk. You could use water but I haven’t and I advise against it. If you want rich and creamy, you’ve gotta commit to whole milk. The third ingredient is Na3C6H5O7.

Sodium Citrate, or trisodium citrate Na3C6H5O7, is produced from a chemical reaction during citric acid fermentation. It’s used in food for its sour salty flavor and can be found in soda, juices, and energy drinks. It also works as a preservative and an emulsifier.  That’s what we want!  So, milk + cheese + sodium citrate = the richest, creamiest, silky smoothest Mac & Cheese!

When using sodium citrate to make a silky smooth cheese sauce (yes you can absolutely use this method for the best nacho cheese sauce ever), you’re going to need an immersion blender.  A whisk will work but my understanding is it’s not quite as silky smooth.  You really wanna rip the bloody hell out of that bond between the fat and water in the cheese. Stick blenders are pretty affordable and I use mine often for soups and sauces.  You’re doing science here, man! Eat Up!

Alright, so we’re going to whisk the milk and sodium citrate in a medium sauce pan.  Then bring it up to almost a simmer before we start adding a bit of grated cheese at a time.  I used a blend of medium cheddar and fontina but you really can use whatever you want.  Each small handful we add we’re going to completely integrate with the blender before we add any more.  This whole process takes less than ten minutes.  Remove from the heat and set aside.  Wait!  Taste it!    RIGHT!?! 🙂

Make the pasta.  You could use elbows or shells but, if you can find it, I really like the super-elbow-spiral Cellentani made by Barilla for my Mac & Cheese. Just combine the cheese sauce with your pasta and serve.

Bonus garnish: in a nonstick pan, heat 1/2 tablespoon of butter and a 1/2 tablespoon olive oil. Add 1/4 cup panko bread crumbs.  Toss until browned.  Set aside then put some diced bacon in that pan to get crispy.

I hope you give this a try.  It’s actually quite easy and worth experimenting with something you can’t find in the grocery store.  You can tell your friends you were doing some “molecular gastronomy” this weekend. 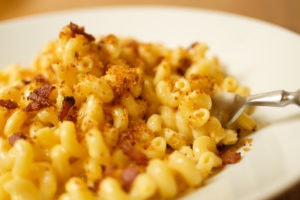 Course: Lunch
Cuisine: American
Cook Time: 20 mins
Total Time: 20 mins
The cheese sauce for this Mac and Cheese has only 3 ingredients. Your favorite cheese, whole milk, and Sodium Citrate. Check Eat Up! Kitchen for a link to buy it online.
Print Pin

The sauce will thicken as you add more cheese.  By no means do you need to stick to one type of cheese or the recipe's suggestion of 12 ounces.
Previous Post: « Beef Stew with Guinness
Next Post: Homemade Grass Fed Raw Milk Mozzarella » 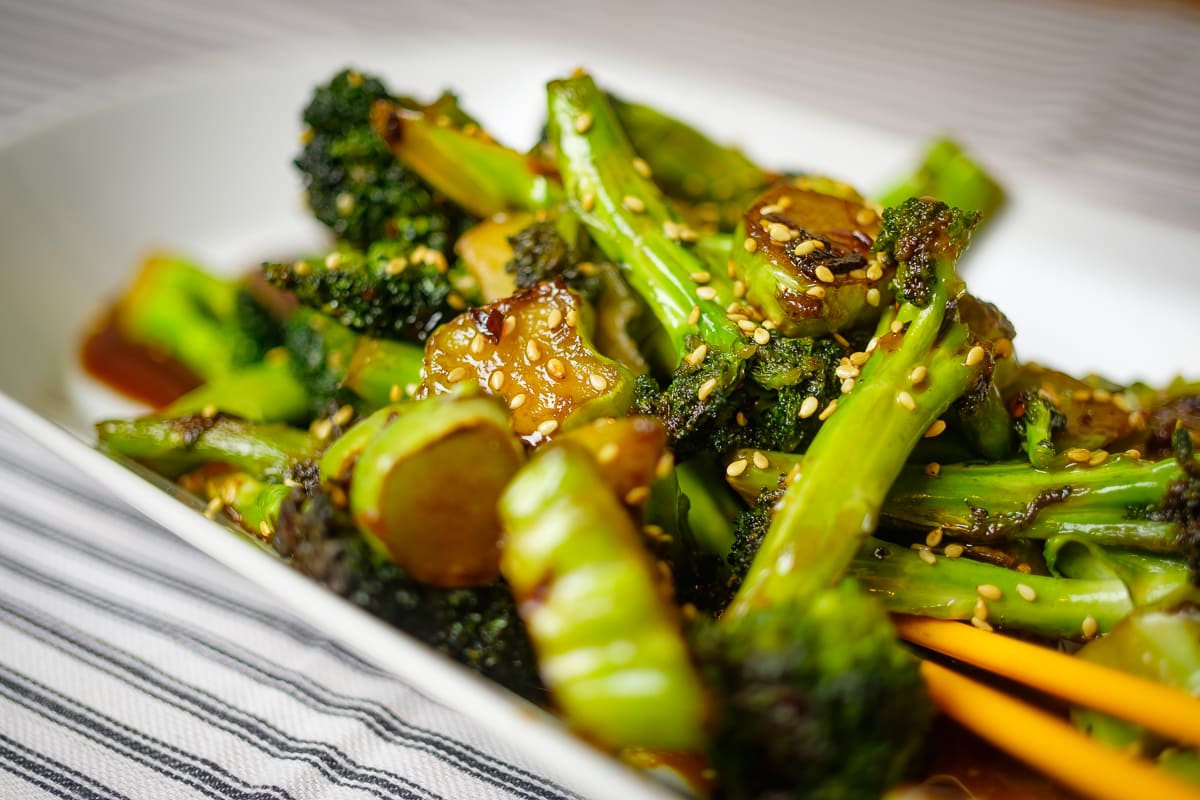 When you’re chompin’ for something quick to munch on, a healthy stir-fry can be pulled together in less than 20 minutes. Today I just threw together this broccoli stir-fry for a quick lunch. Broccoli, garlic, red pepper flakes, a few asian sauces. Done. 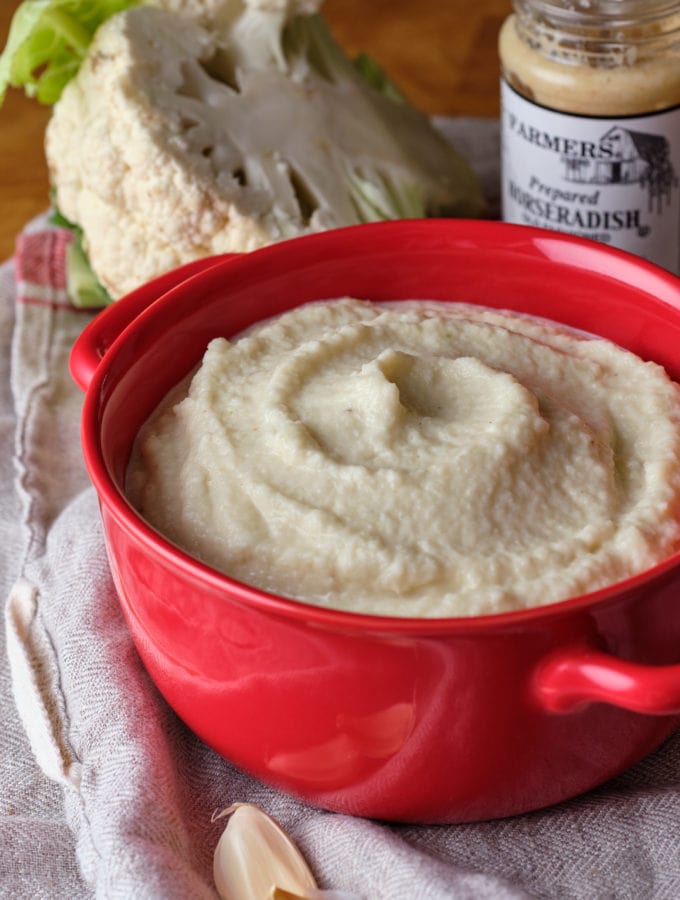 Garlic Horseradish Mashed Cauliflower are the lighter and easier version of the classic Mashed Potatoes. Nevermind the health benefits as we’re using butter and cream here – but probably not as much as you’d use with Potatoes. I love Mashed Potatoes but I’m always trying to make a lighter version. Not lighter in calories but…