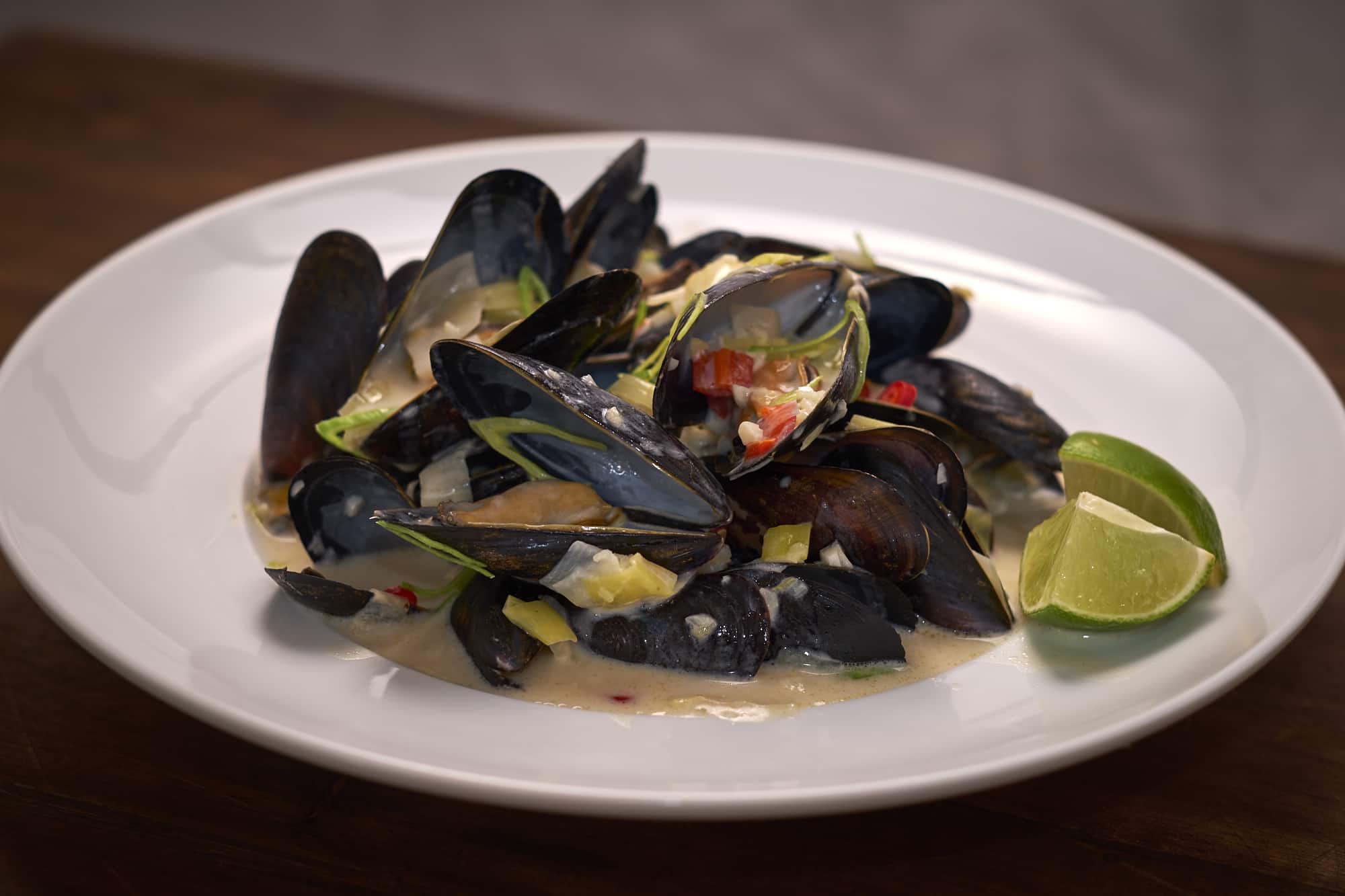 These plump and delicious PEI Mussels are steamed in Coconut Milk, Miso, and Lime Juice drawing on influences from South East Asia.

Mussels are among a handful of dishes I’ll rarely order when I go out to eat. Also on that list are omelets, pizza, steak, and pasta. The common thread of these foods is that they’re some of the easiest and least expensive meals to make at home. On the other hand, I can admit that (I’m pretty sure) these are the first mussels I’ve ever made at home. Go ahead, be sad for me.

There’s a restaurant I frequent nearby that has two mussel dishes on their menu. I always forget about them but when I do order them I say, these are the freakin bomb. Why aren’t I eating mussels more often?!

I’m trying to come up with some reasons why mussels or other bivalves aren’t as prevalent as chicken or at least shrimp. They couldn’t be easier to cook; taking less than 10 minutes to steam in chicken stock or white wine. They’re a blank palette as far as international culinary inspiration. PEI Mussels in particular are one of the most sustainable and eco-friendly foods there are. Mussels are their own utensils; once you eat one, you can use it as ‘tongs’ to pinch out the meat from the other shells and use half as a soup spoon – so, they’re fun! And who doesn’t love dipping some hearty bread in to that mussel broth!? Yum!

Could it be that people are afraid of seafood poisoning or ‘bad’ mussels? Okay, but have you heard of salmonella? Have you seen the conditions of industrial chicken or shrimp farms? You still eat chicken, right? Are mussels or other seafoods not as popular because their freshness window is slightly narrower than other meats? Does that say something about our culture of not cooking with the freshest ingredients? I’m just thinking out loud here. I’m genuinely curious why, in America at least, we’re so tepid on seafood. Let me know in the comments below what you think.

I haven’t had all the mussels in the world, but in my limited experience, PEI are hands down the best.  The winter beginning 2015 was rough for PEI Mussel lovers. Prince Edward Island had snowfall exceeding 18ft and heavy ice conditions prohibiting safe farming. They chainsaw in to the ice to farm in the winter! National distribution was severely limited. Whispers spread around town when a local restaurant received a limited shipment (seriously!). This was the winter I realized how much I love PEI Mussels. You don’t know what you have until it’s gone. PEIs in particular are sweet, tender, plump, and hella delicious. 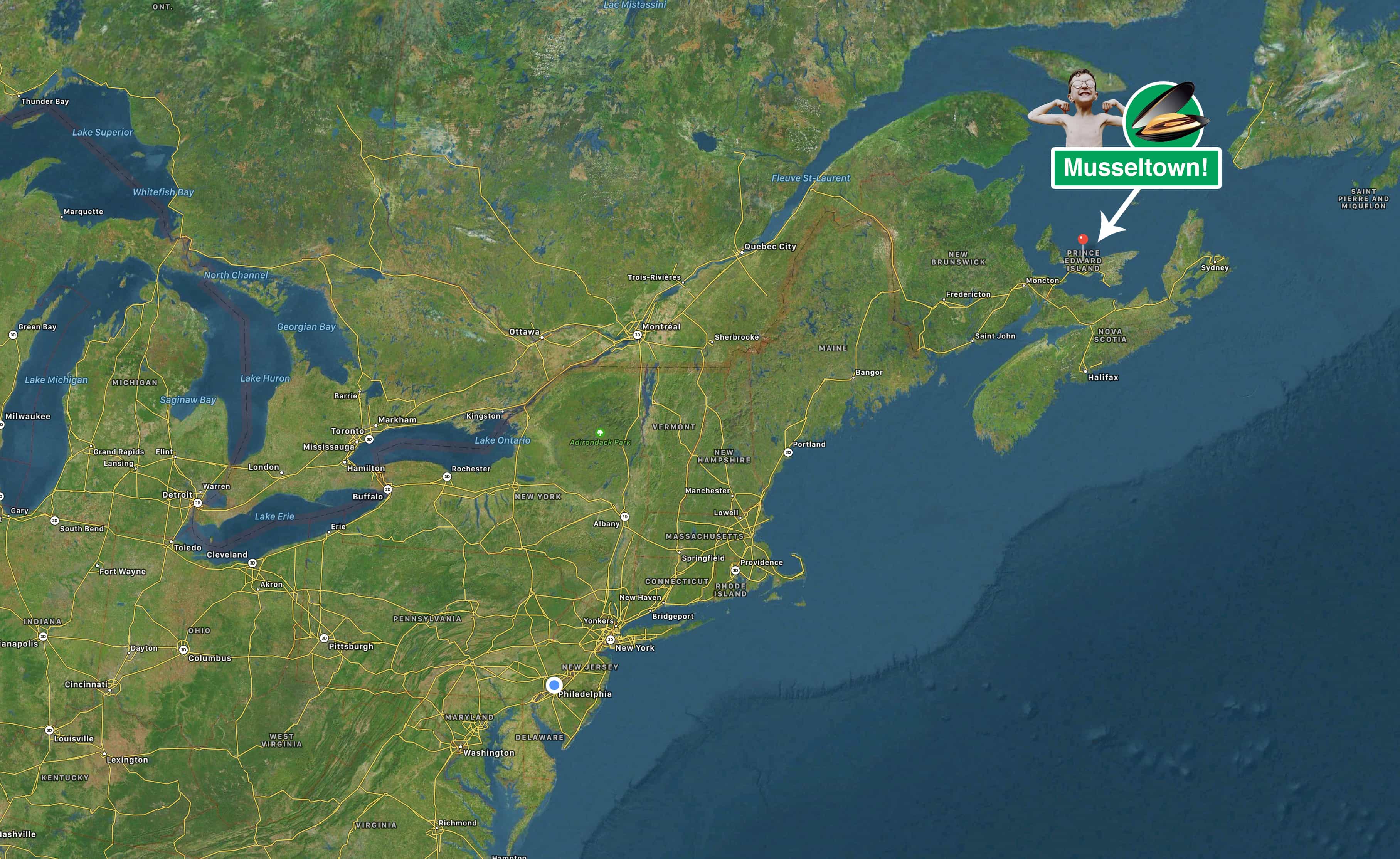 The farming of PEI Mussels is pretty interesting. Prince Edward (father of Queen Victoria) Island is located eight hours by car from Portland Maine. Water temperatures range from 30°F in February to 65°F in August. While PEI Mussels are harvested year round, they’re more plump in the winter. In the spring, mussels release their seed which farmers collect by dropping frayed rope in to the waters. Once the mussels begin to form they’re gathered and sorted by size. They’re brought back to the water in ‘socks’ to grow for 18-24 months before they’re harvested and inspected for distribution. PEI Mussels are filter feeders which feed only off the natural aquatic environment. The pristine waters are highly regulated and tested by the Canadian Shellfish Sanitation Program. There are 130 growers in Prince Edward Island which harvest over 40 million pounds every year. This comprises 80% of the cultured mussels in North America.

Nutritionally, Mussels have a lot of things going for them. They have the same protein content as beef per weight but 25% of the calories. They’re high in B12, Iron, Zinc, Selenium, Vitamin C, and Antioxidants like Selenium and Manganese.

Culinarily, I’m struggling to think of something that wouldn’t work with Mussels. I have to agree with Kenji Lopez-Alt who said,”mussels are the easiest choose-your-own-adventure one-pot meal around”. White Wine and Garlic. Tomato and Basil. Saffron, Parsley and Chicken Stock. Thai Curry. Jalapeño and Cilantro. Bacon, Butter and Onions. Beer!

There’s a lot to do with the often overlooked, and perhaps under appreciated Mussels. They’re healthy, they’re sustainable, and they’re a great canvas for exploring colorful culinary fusion. 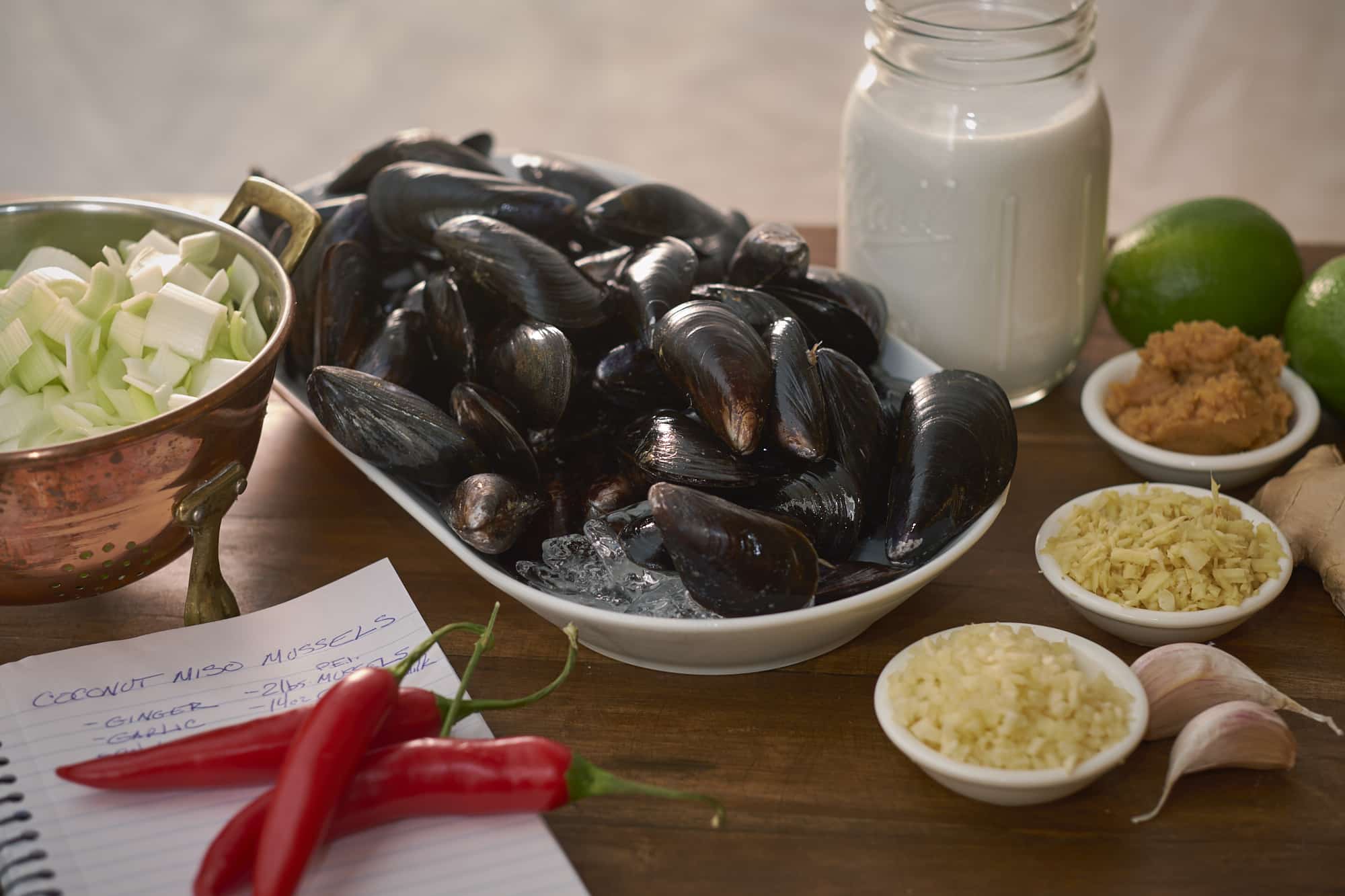 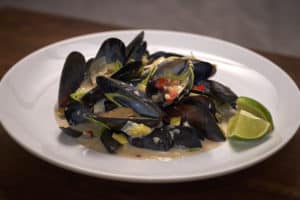 Cuisine: South East Asian
Prep Time: 10 mins
Cook Time: 15 mins
Total Time: 25 mins
These mussels are steamed and served in a soup of coconut milk, miso and lime juice. Ginger, garlic, leeks and red chilis make up the aromatics. Serve with a spoon and/or lots of hearty grilled bread. This should serve two as a main course or 4-6 for an appetizer.
Print Pin 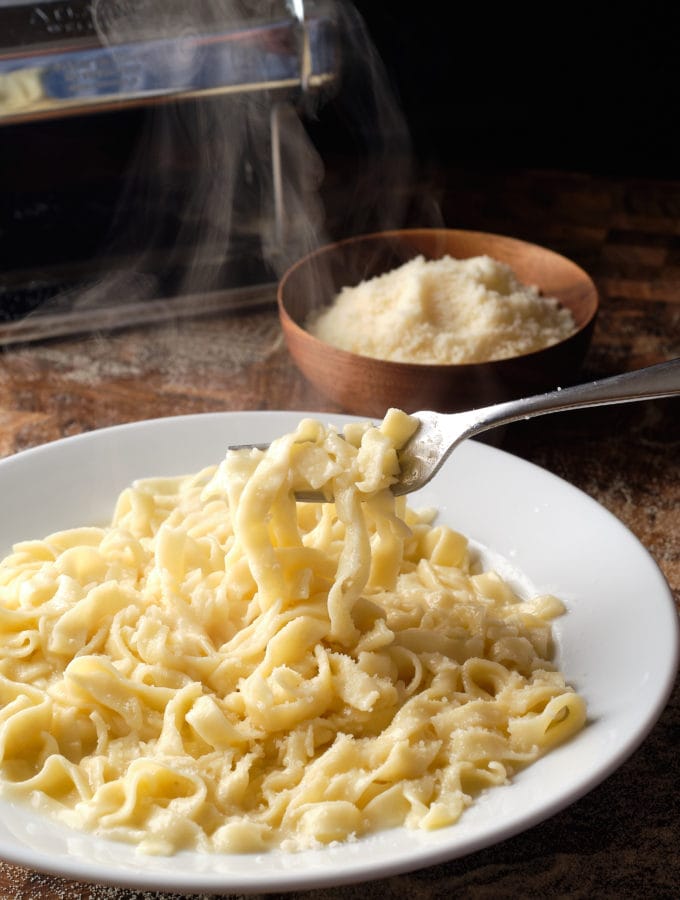 Semolina Flour, Water, Salt, Parmesan Reggiano, and Butter are the only ingredients you need for Authentic Fettuccine Alfredo From Scratch. There’s no need for eggs in your pasta or cream in your Alfredo sauce. Whether it’s for bread, pasta, or pizza, there’s nothing I enjoy more in the kitchen than working with dough. I’ve been…

END_OF_DOCUMENT_TOKEN_TO_BE_REPLACED 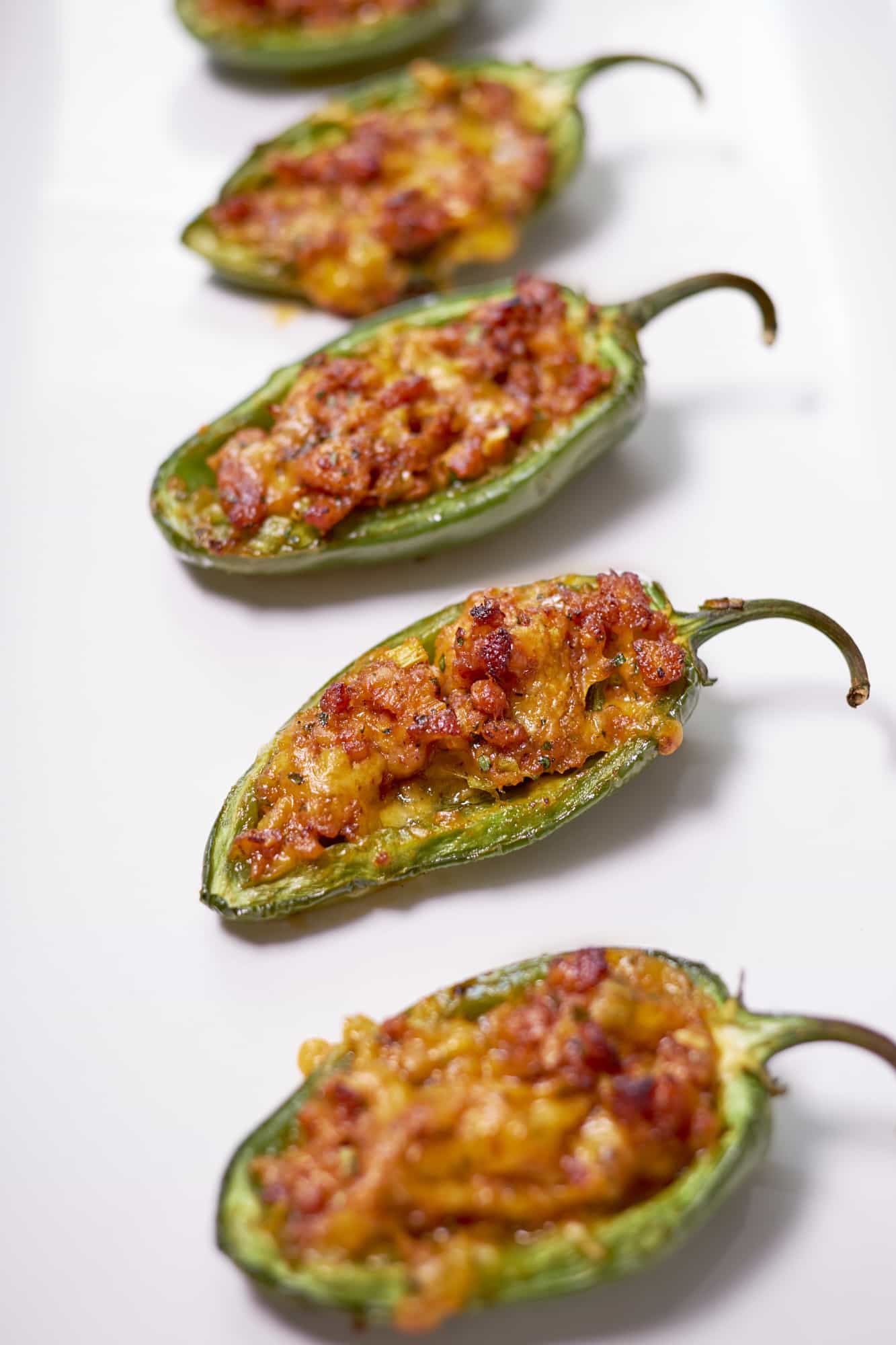 These Chicken Stuffed Jalapeños are awesome!!  If you were looking for something impressively delicious to bring to a party, here ya go!