This Orange Chipotle Sea Bass Taco Bowl is an awesome lunch to throw together on a weekend or even a weekday! Take all your favorite taco ingredients, throw them on top of some Lime marinated Napa Cabbage and Bib Lettuce then to it off with this amazing Chilean Sea Bass quickly marinated in Chipolte, Cumin and Orange Juice. I prepared this for my mom for Mother’s Day and she loved it!

I love these recipes that take little bit of time to prep but they’re so easy you could do the work while you’re in the middle of doing all sorts of things. I just so happened to be hosting my mom for Mother’s Day while I was making this Orange Chipotle Sea Bass Taco Bowl. You could double up on some of the ingredients and host a Build Your Own Taco Bowl Party! Maybe in addition to the Chilean Sea Bass you could add some Skirt Steak or Chicken. The Orange Chipotle marinade would work with any protein. The fish only needs about five minutes to marinade but steak could take an hour or so.

You can make the Pickled Red Onions, Charred Corn, and Lime Crema the day before. Pickled Red Onions, you know they’re my fav, they take all of five minutes but you should allow them to cool for at least an hour before using. You can char the Cob Corn on the grill or in a skillet with a little oil. Heat the skillet to medium high heat then fry the corn undisturbed just until they start to pop and make a mess all over your kitchen – fun times! Maybe use a grease guard or some paper towel to prevent a mess. The Lime Crema is just lime zest, lime juice and sour cream. That’s like two point five minutes.

The fish takes about 20 minutes to cook. If you want to serve your fish warm you’ll want to start prepping your bowls before you even take the fish out of the refrigerator. Finely chop two cups of Napa Cabbage and marinade that in the juice of one lime for about 15 minutes. Then start adding all your ingredients. The amount of ingredients you use is really up to you. If you love Black Beans, add the whole can – I used about half. I’m suggesting one Cob of Corn but you might like to use two. You should totally use this salad to hit all your happy spots. Then send me tons of pictures of your salads! My one suggestion would be to not overwhelm your salad so that it hides the delicate flavor of the fish.

I used Chilean Sea Bass for this Taco Bowl. I wanted a nice thick and flaky fish to add some substance to the salad. Cod would work out pretty well but it’s a little ‘fish forward’, I think, for this salad. I don’t buy Chilean Sea Bass often enough. It’s crazy delicious and easy to cook. Preheat the oven to 425°F and line a baking sheet with parchment paper. Combine Chipotle Powder, Cumin, Sea Salt, and Orange Juice then marinade the Sea Bass for about five minutes. Bake this fish for 20 minutes or until the center is opaque. Seriously, this is good enough to eat all on it’s own – maybe with a squeeze of lime and some cilantro. Allow it to cool enough to handle then flake it up and serve on top of the salad.

If I were you, I’d dress the Orange Chipotle Sea Bass Taco Bowl with Lime Crema, more Cilantro, and more pickled Red Onions. Again, you do your happy thing. This is a VERY happy salad. As much as I love my mom and having her over to celebrate the great job she did raising me, I was slightly disappointed that I had to share this Taco Bowl with anyone else. 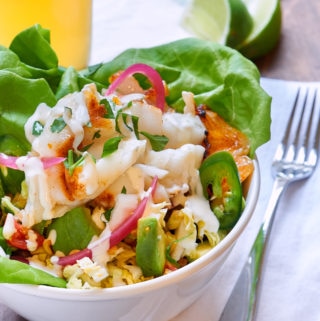 Anthony
This Orange Chipotle Sea Bass Taco Bowl is an awesome lunch to throw together on a weekend or even a weekday! Take all your favorite taco ingredients, throw them on top of some Lime marinated Napa Cabbage and Bib Lettuce then to it off with this amazing Chilean Sea Bass quickly marinated in Chipolte, Cumin and Orange Juice. I prepared this for my mom for Mother's Day and she loved it!
Print Recipe Pin Recipe
Prep Time 30 mins
Cook Time 20 mins
Total Time 50 mins
Course Lunch

Ingredient amounts are really up to you. One pound of fish is about enough for 2-3 servings. You'll likely have plenty of left over Napa Cabbage and Bib Lettuce for 4-5 servings.

pickled onions sea bass seafood tacos
This post may contain affiliate links. I may get a tiny kickback from your purchase.